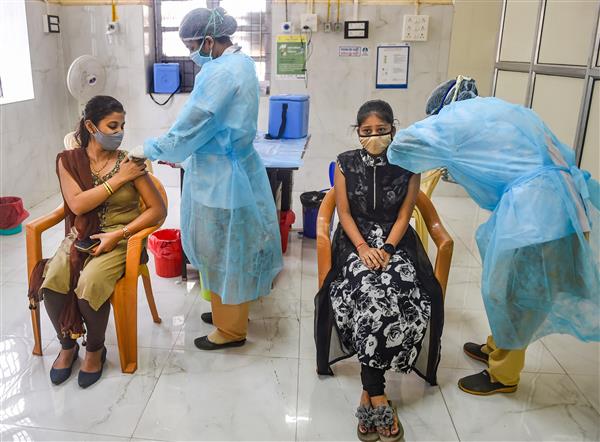 The government on Thursday said two-third of India’s 94 crore adults had received at least one dose of the Covid 19 vaccine and one-fourth had received both the doses in a significant ramp up of both the scale and speed of the national inoculation drive.

“Sixty-six per cent of all adults have received at least one dose of the Covid vaccine and 23 per cent have received both,” Health Secretary Rajesh Bhushan said today.

“In September India had daily administered 82 lakh average doses, which is about 17.99 crore through the month so far,” Bhushan said.

In further attempts to scale up inoculations the government today said it had approved at home vaccination for people who cannot visit centers due to illness or disability.

“Such persons will be administered vaccines at home under supervision,” the Member, Health, NITI Aayog said.

The government, meanwhile, cited “lower than expected rate of decline in new Covid cases” and warned against mass gatherings.

ICMR Director-General Balram Bhargava said the second wave had not yet concluded and added that “let festivities be observed in families, let’s not travel for festivals because the virus thrives in high population density. Avoid mass gatherings and non essential travel related to festivity and holidays for the next few months.”

India witnessed 31,923 new cases today, with Bhushan also warning, “The second surge has not concluded. We are in midst of a second surge, even while we may be witnessing a decline.

Covid appropriate behavior has to be maintained at all times and vaccine rate has to be expanded.”