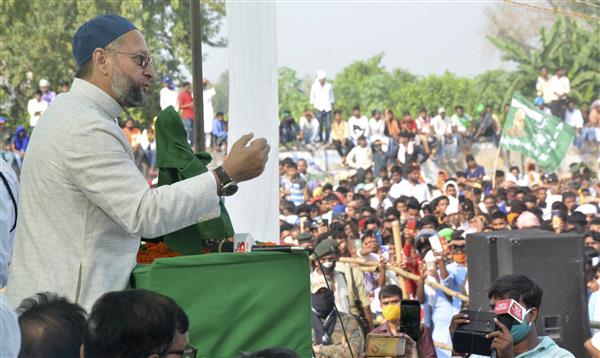 After the “abba jaan” jibe by the Uttar Pradesh Chief Minister Yogi Adityanath, now the BKU leader Rakesh Tikait has called the All India Majlis-e-Ittehadul Muslimeen (AIMIM) leader Asaduddin Owaisi “chacha jaan” and a “B team of the BJP”.

“Owaisi and the BJP are a team. He is BJP’s ‘chacha jaan’. He has the blessings of the BJP. He will abuse them, but they will not file a case against him.

“The BJP will take his help. Farmers will have to understand their moves. Owaisi is double-faced, he will ruin the farmers. They will hatch conspiracies during the Assembly elections. But as shown by the Zila Panchayat elections, people in Baghpat are revolutionary,” Tikait said, warning farmers.

The BJP, meanwhile, has been accusing Owaisi and BSP supremo Mayawati of doing “communal politics in the state”.

Mayawati is being accused of trying to divide Brahmins, who are angry with Adityanath over “targeting the community and favoring Thakurs”.

Interestingly, as soon as Owaisi arrived in UP, the social media was buzzing with “warnings” to members of the minority community, calling him the “B-team” of the BJP, who is trying to “divide Muslims” and dent “the traditional vote base” of the main rival Samajwadi Party

Urging Muslims in UP to “learn from West Bengal who did not get influenced by Owaisi” despite “his best to cut Muslim votes so that BJP could win”, social media influencers from the community claimed that the AIMIM chief “is contesting in UP so that the BJP can win”.

This is not the first time the four-time MP from Hyderabad has faced such Lok Sabha MP.

He was “single-handedly” held responsible for the defeat of the Grand Alliance in Bihar in 2020 by the RJD. Terming him the “B-team of the BJP-RSS”, senior RJD leader Shivanand Tiwari said that “Owaisi fought at the behest of the BJP in order to defeat the Grand Alliance in Bihar” in “an election that could, otherwise, had the potential to change the politics of the country”.

Beginning his political campaign from Ayodhya, Owaisi said that he had come to UP “to defeat the BJP” and attacked the SP, alleging that Muslims had been “cheated” in the name of secularism by parties like it.

“Our first effort is that our Muslim leadership should be developed in the biggest state of the country”, he said while addressing a rally at Rasulabad village in the Muslim-dominated Rudauli constituency in Ayodhya.

The AIMIM leader urged members of his community to not live “in the shadows. Nineteen per cent of the voters are Muslims and nine percent are Yadavs. But the CM will be yours (Yadavs) and we (Muslims) will not even get the job of a peon,” he was quoted as saying.

Owaisi claimed that voters from the Yadav community were not voting for Muslim candidates and said that his party was prepared to contest 100 of the 403 Assembly seats in the state.

The Samajwadi Party, which is relying on the Muslim-Yadav combination to reclaim the state, is currently the top-most challenger to the Yogi Adityanath-led BJP in the state.

Observers say any dent in the traditional vote bank of the Samajwadi Party will only benefit the BJP.

Interestingly, while commending “efforts for Hindu-Muslim communal harmony” at the Muzaffarnagar ‘kisan mahapanchayat’, Mayawati also took on the Samajwadi Party saying that “this will certainly help a little in healing the deep wounds of the horrific riots that took place in the SP government in 2013, but it will also make many uncomfortable.