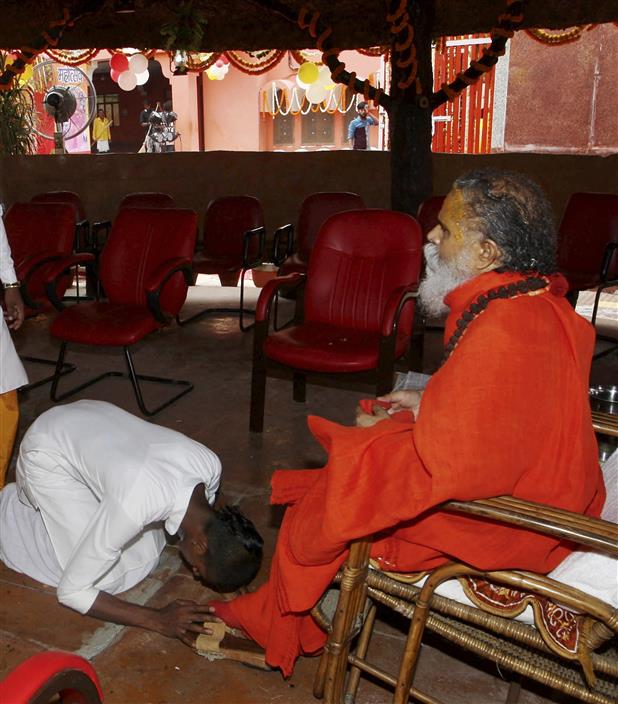 Giri’s body was found hanging from a rope inside a room in the Baghambari Mutt in Daraganj area.

Senior police officers hastened to the spot and took custody of the body, which will be sent for post-mortem.

The police said that prima facie, it appears to be a case of suicide but further probe would reveal the exact cause of Giri’s death.

The death of Shri Narendra Giri ji, President of Akhara Parishad, is extremely sad. While being devoted to spiritual traditions, he played a big role in connecting many streams of Sant Samaj together. May the Lord place them at your feet. Peace!!

The media has been barred from entering the Mutt, which is presently under heavy security cover. Hundreds of disciples of Giri have reached the Mutt, but they have been prevented from going inside. The disciples refused to believe that the saint had ended his life and insisted that there was some foul play.

Giri was involved in a bitter property dispute with his junior Anand Giri a few months ago. The matter was later resolved.

Sources said that a five-page suicide note has also been recovered in which Giri has held one of his disciples responsible for his death. The police, however, refused to confirm this.

Giri had replaced Mahant Gyan Das as the chief of the Akhara Parishad in March 2016. While the electoral process replacing Gyan Das was conducted a year ago in 2015, the controversial Mahant had refused to cede ground to Giri.

Das was allegedly facing charges of criminal activities and objectionable behavior and had about half-a-dozen criminal cases pertaining to attempt to murder, loot, dacoity and economic offenses registered against him in Ayodhya and Allahabad, mostly by the sadhus of the Akhara Parishad.

As the president of the Akhara Parishad, Giri played a key role in the Kumbh Mela held in Ujjain, Prayagraj and recently in Haridwar. —IANS