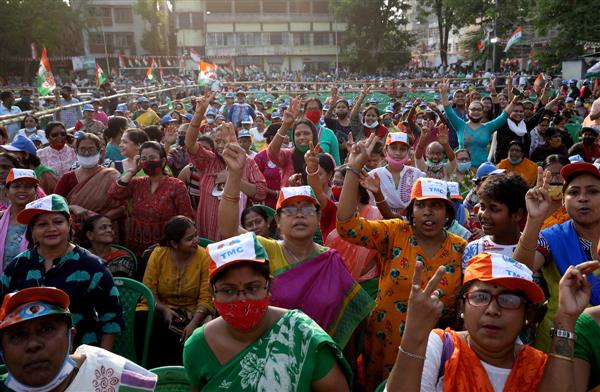 Early trends for counting of votes on Sunday in the high-stakes assembly elections in four states and a union territory show that the TMC and challenger BJP were locked in a neck-and-neck contest in West Bengal, while the DMK had an edge in Tamil Nadu.

In Assam, the ruling BJP-led NDA was leading in 22 seats, while the Grand Alliance spearheaded by the Congress is ahead in 15 places, according to initial trends available from counting of postal ballots in Assam, officials said.

The ruling LDF in Kerala was leading in 75 of the total 140 seats while opposition UDF was ahead in 56 segments as counting of votes for the April 6 assembly elections got underway.

Officials said the ruling TMC had a slight edge in West Bengal as it was leading in 64 constituencies while the BJP in 60 as counting of postal ballots got underway.

The Left-Congress-ISF candidates are leading in three places.

In Tamil Nadu, Chief Minister K Palaniswami was leading in his home segment of Edappadi in Salem district and leader of opposition and DMK president MK Stalin was ahead in Kolathur constituency here, according to early trends.

While the DMK combine was ahead in 30 segments, the AIADMK was leading in at least 18 constituencies.

The trends indicated that the DMK was ahead in constituencies including Kurinjipadi, Neyveli, Virudhachalam.

BJP’s state unit chief L Murugan was ahead in Dharapuram and AIADMK leaders and state ministers KC Veeramani and Benjamin were ahead in Jolarpet and Maduravoyal here.

Initial trends in Kerala indicated that the BJP-led NDA is ahead in two seats-Palakkad, where ‘Metroman’ E Sreedharan is contesting and Nemom, the lone seat won by the saffron party in the 2016 assembly polls.

BJP candidates are leading in 16 seats, while those of its ally AGP in six.The Congress has established initial leads in 14 places and AIUDF in one.

Assam has a 126-member assembly and 64 seats are needed for a simple majority.

The counting of votes for the assembly polls is being taken up at a time when the country is grappling with a raging COVID pandemic.

Counting of votes began at 8 AM and continue late into the night with as many as 1,100 counting observers watching the process.

Exit polls have forecast a tight contest between the incumbent Mamata Banerjee-led Trinamool Congress and the BJP in the critical West Bengal assembly elections and put the ruling saffron combine ahead in Assam while projecting that the Left alliance will retain Kerala, a feat unseen in four decades.

For the Congress, the exit polls predicted that it may fall short in Assam and Kerala and lose in Puducherry to the opposition alliance of AINRC-BJP-AIADMK.

The only good news for the Congress was from Tamil Nadu, where the exit polls predicted that the DMK-led opposition alliance, of which it is a part, will trounce the AIADMK-BJP coalition.

The poll results in the four states and the UT are also likely to reflect how the handling of the COVID pandemic has played on the voters’ mind.

Polling was held in eight phases in West Bengal between March 27 and April 29, in Assam in three stages on March 27, April 1 and 6, while votes were cast in Tamil Nadu, Kerala and the Union Territory of Puducherry in a single phase on April 6, when the COVID surge had begun in many of the states.

Kerala, Tamil Nadu and West Bengal are among the 11 states that account for 78.22 per cent of the total active cases, according to the health ministry.

A three-tier security arrangement is in place in West Bengal’s counting centers and 256 companies of central forces deployed across 23 districts of the state that voted in a gruelling election marred by violence and vicious personal attacks.

The result will decide whether Mamata Banerjee, who has been in power for 10 years and is arguably the toughest poll of her political career, has been able to thwart the challenge by the battle-hardened election army of the BJP led by Prime Minister Narendra Modi and Home Minister Amit Shah.

The BJP, which had just three seats in the 294-member assembly after the elections and went to win 18 out of 42 seats in the 2019 Lok Sabha election, had pulled out all the stops in the state in a determined bid to oust Banerjee, a vocal critic of Prime Minister Modi, and add another state to its tally of 17.

The Left-Congress alliance is the third main contestant in the state.

In Tamil Nadu, both Dravidian parties – AIADMK and DMK – went into the election without their stalwarts, J Jayalalithaa and M Karunanidhi.

In Kerala, the Left Democratic Front (LDF) is seeking to break the state’s four-decade-old trend of swinging between the communists and the Congress-led United Democratic Front.

The BJP has an alliance with the Asom Gana Parishad (AGP), the United People’s Party Liberal (UPPL) and the Gana Suraksha Party (GSP), In Puducherry, the AINRC-led NDA and the Congress-led Secular Democratic alliance are in a contest. While AINRC fielded candidates in 16 of the total 30 constituencies the BJP is contesting nine seats while the AIADMK is contesting five seats.

Counting will also be held in four Lok Sabha seats and 13 assembly seats across 13 states where bypolls were held.

The EC has banned victory roadshows and vehicle rallies .– PTI