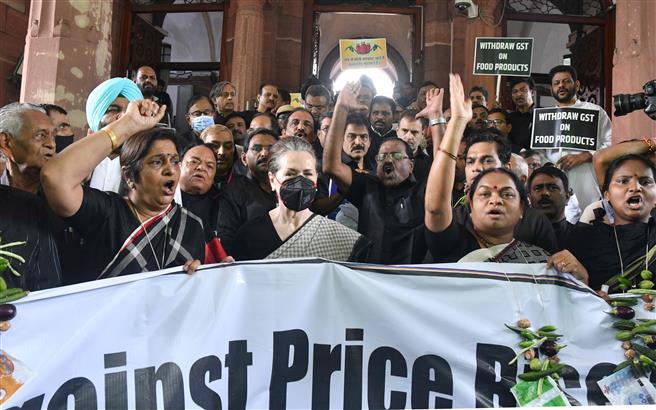 The BJP today hit back at Congress leader Rahul Gandhi daring him to tell the country why he’s on bail and in what offense and asked him not to blame the institutions for his own electoral failings. As the Congress’ protest gained steam, in the evening the saffron party gave it an entirely new angle and perspective saying that the opposition party chose the day specifically to “further promote their appeasement politics because on this day Prime Minister Modi had laid the foundation of Ram Janambhoomi

“Congress should behave responsibly and cooperate with the law. The matter is going on the basis of complaints that have been filed,” Shah said, adding that Congress “chose this day for protest and wore black clothes because they want to give a subtle message to further promote their appeasement politics because on this day itself Prime Minister Modi laid the foundation of Ram Janambhoomi”

Adityanath added saying that till now, Congress was “protesting in normal attire but today they protested wearing black clothes to insult Ram bhakts”. “They chose this day as today’s Ayodhya Diwas which marks the beginning of construction of Ram Janambhoomi, the beginning of the construction of Ram Janambhoomi. Such acts of the Congress party have insulted the faith of India. Congress’ attitude has insulted Ayodhya Diwas along with insulting India’s democracy and judiciary. We condemn such acts of the party,” he claimed

Congress leaders argued saying that ‘shilaniyas’ was done as per the Hindu Calendar and according to nakshatras whereas August 5 was a date per the western calendar.