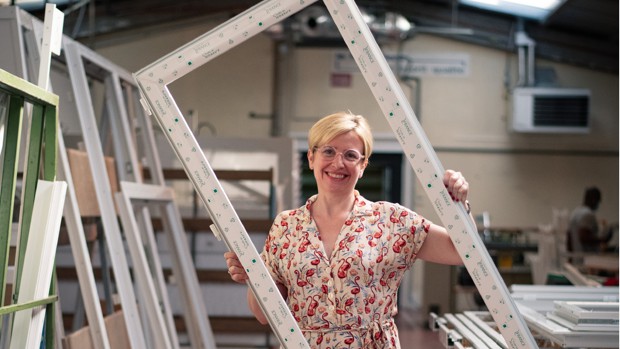 A committed entrepreneur, Catherine Guerniou is one in more ways than one. Member of the Economic, Social and Environmental Council (CESE) for a few months, she does CSR as Mr. Jourdain did prose. With common sense and on the ground. “After years of experience in large companies where contact is often forgotten, I finally chose to place people at the heart of my project”, delivers the business manager.

Catherine Guerniou took over La Fenêtrière in 2005, the small company of eleven employees, created by her parents in 1984 in Champigny-sur-Marne (Val-de-Marne). She was then 30 years old and wanted to reconnect with this human dimension that she no longer found in large companies. Since then, she has also continued to lead the manufacturer of windows and exterior woodwork on the path of responsible and local development.

This commitment enabled it, in 2020, in the midst of the Covid crisis, to record a 27% increase in its turnover, to 1.8 million euros before a projection of 2 million euros in 2021. “In mid-April, after the first confinement, our workshop was able to restart very quickly because we work in a short circuit with French suppliers. This flexibility has ensured our growth”, explains Catherine Guerniou.

From her beginnings at the head of La Fenêtrière, the manager joined the French Building Federation (FFB), which accompanied her in her new mission. Helped by an outside consultant, she began a GPEC (provisional management of jobs and skills) to retain in-house know-how. “There was no job description. The carpenters lacked versatility, the technical skills were on the way out… It was an emergency. I defined the different professions and developed training plans. »

Taking over the business alone, Catherine Guerniou relies on the expertise of her collaborators and sets up a participative management, to the great fear of her parents! “I understood that I needed the employees, their experience… The collegiality of decision-making came naturally,” she recalls. Weekly workshop meetings, visibility on the performance of the company, information campaigns on social networks… the new leader communicates internally and externally.

It also strives to give meaning to the mission of its employees. “For example, I invited psychiatry professor Michel Lejoyeux. The latter was able to explain to the workers in the workshop that they were not building simple windows with repetitive movements but that they were thereby working for the well-being of consumers. »

Catherine Guerniou very quickly became aware of environmental issues in a sector where issues of thermal insulation and energy consumption are central. It involves its staff in this ecological transition by jointly developing a Climate Fresco.

In 2007, she took her commitment one step further and became CSR leader at the FFB. The entrepreneur admits having also been pushed by events: “At that time, we began to suffer the consequences of massive imports from Eastern European countries which were charging low prices. I had to think about how we reacted. And that went through the affirmation of our DNA around the human and proximity. It encourages short circuits at all levels to limit the carbon footprint: supplies (glass, PVC, aluminum or hardware) from France, local manufacturing and distribution to professionals, architects, masons or carpenters, all concentrated in Ile-de- France, near the company headquarters.

“Our prices are still more expensive, sometimes by 100%, but we offer traceable quality and real service. When a screw or a handle are defective, we change them in 24 hours without having to bring them from abroad”, she defends. The leader emphasizes innovation and reuse. It offers joinery that evolves over time, more efficient in terms of sound without having to replace it.

Catherine Guerniou joined the 150 leaders of the Climate Business Convention last year to propose sustainable models. Then in May 2021, she was appointed to the CESE (CPME delegation) and became a member of the environment committee and the delegation for women’s rights and equality. This new role monopolizes her almost two days a week, so she gives her employees even more autonomy. A way perhaps, at 46, to prepare his succession at the head of La Fenêtrière. “In five to six years, I will start to hand over. The transmission will be smooth. The valuation of the company is not what matters to me but rather that each of the employees can continue to live from it. »