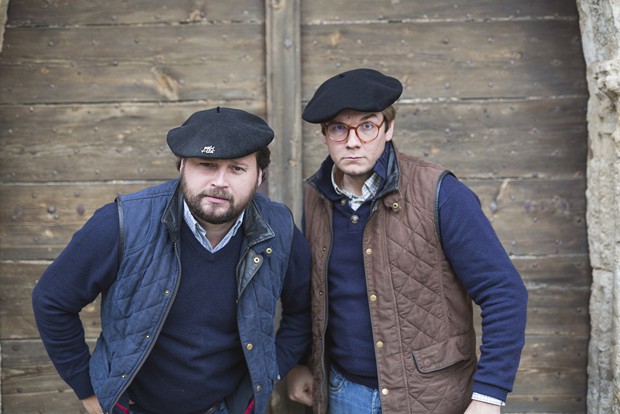 The invigorating stopover was planned for a long time, the hoped-for base like a Grail. To realize their dream of good franquette and sit down at “Gueuleton” in Bordeaux, four thirty-something Norman first had to swallow kilometers. Belly skin tight after opulent feasts based on prime rib and grenaille potatoes, Dieppois do not regret having crossed the toll, nor put down a day of RTT. The icing on the bone marrow: as a happy coincidence, the owners of the “Repaire des Bons Vivants” – the subtitle of the sign – are present.

Taps on the shoulder, smiles filled with sincere gratitude: confronted by their admirers, Arthur Edange and Vincent Bernard-Comparat lend themselves with good grace to the game of selfies. These clients could be their brothers but will take to the road again with the fleeting pleasure of having shaken hands with their idols. On the other side of the Place du Palais, the Bar des Vedettes has never worn its name so badly: it is indeed at n ° 5 that the real stars have taken up their quarters.

The logo – a white “G” on a black background and a half-glass, half-fork design – cannot however sum up the Gueuleton galaxy on its own. If it is today structured around fourteen restaurants scattered between Reims and Lyon, twelve caterers and as many mobile rotisserie, a showroom and a pantry, it is above all the reflection of a philosophy. An art of living in its own right, a vision of good food that is both rejuvenated and uninhibited, where the counter holds a prominent place and where the pan-fried porcini mushrooms automatically prevail over the quinoa. “They advance as they would cook, admits Patrick bertossi, historical wine merchant of the company. And only they found the recipe. “

The tandem with heavy caloric liabilities was made to get along. Otherwise, he would never have lived in a shared flat for seven years. Formerly a student at the hotel school in Talence (Gironde), Vincent Bernard-Comparat abandoned the management option to do all his cooking courses; Son of producers of armagnac and prunes from Agen in the Gers, Arthur Edange for his part is destined for accountancy, a discipline regularly eclipsed by the meticulous restoration of a beige 2CV belonging to his great-aunt. In their apartment near the Chaban-Delmas stadium, country habits take pride of place and, once a week, the friends come out the big game for their epicurean friends.

During gargantuan banquets, stuffed wood pigeons and stewed dishes rub shoulders with preserves and pâtés slipped by the mother’s hand into their student suitcases. “It has happened that we end up with a wild boar thigh thawed by mistake, Arthur says. We ate it all over the place for three weeks! “

By the enticing smell, a son of an Italian winegrower proposes to add authentic pasta to it; Never mind, he will hang his tagliatelle in the living room to dry them. At the time, already, we court them as we find them “A bit old-fashioned, on the fringes”. But Arthur and Vincent do not budge: they want “Put a word” and a destiny on what they love (family meals, large tables in the open). So it will be “Gueuleton” and nothing else.

Themed evenings that make the buzz

A perfect subject for the final thesis of the more bearded of the two who, in 2011, first imagined the concept as an online sales site for local products. To measure the appetite of their target, the two Gascons address their stomachs and invite them to feast on themed evenings in private places. Snail, suckling pig, truffle or even seafood evenings follow one another, each time gathering a little more amateurs, galvanized by the start of a buzz on social networks. They register the mark even before having created their company, and get a first loan of 15,000 euros from a banker in Lot-et-Garonne. “He hadn’t understood anything about the project … but trusted us”, remembers Arthur Edange.

In the summer of 2013, there was a boost: the father of a friend offered to transform his premises, located in the heart of Sarlat (Dordogne), into an ephemeral wine bar. In a hurry, we set up on the terrace “A plancha made of odds and ends” ; two months in a row, the corkscrew is running at full speed, like grilled duck breasts and hearts. Against all expectations, tourists go their way … but the locals fall in love. Thus, the first “real” “Gueuleton” saw the light of day in Agen six months later, on the Place du Marché-Couvert. Forty thousand euros of loan and, at the very beginning, not the shadow of a cash register so that this old sandwich shop comes back to life in the guise of a 100% South-West counter.

In their drive, the founders are working hard on the communication. On YouTube, their web series entitled “Terroirs de gueuletons” has thus accumulated 140,000 subscribers, all keen on the duo’s wanderings on the most attractive lands of France. We saw them devouring beef in Bazas, hunting thrush in the Corsican mountains, kissing the best pies in the Médoc, delighting in pork, aged cheeses, wines, cognac, walnut oil, raclette , spit-roasted chicken, oysters, steaming duck breasts and artisan sausages brushing against a glowing embers. Brief and salivating extracted from their vital appetite. Take away these invigorating pleasures, and the flame is extinguished.

” Their strength, observes Rémi Barranger, at the head of the Pau den serving garbure and hen in the pot, it is truly embodying their passion to the end. I was 22 when I left the architectural firm in which I was about to invest for the restoration. Of course, it was Gueuleton who pushed me to seek out this love of taste. “

Travel to the land of the good

Soon, it will be possible to afford a weekend like the founders of Gueuleton. Short tailor-made stays including the services of a beret guide, to meet artisans, producers, breeders and winegrowers from the finest regions. “It will be like our videos… but without the cameras! “, promises Vincent Bernard-Comparat.

A similar quest animates the million followers subscribed, cumulatively, to the Facebook, Instagram and TikTok accounts of the troublemakers of the good fat. A freshly cut Bayonne ham or a glass of digestif posted in full confinement, and it is the absolute turmoil within the community, which begins to fantasize about the “G-spot” of good food located at the four corners of France. “We unwittingly made ourselves the spokespersons of the older generation, Arthur Edange analysis. Nowadays, people find themselves stunned with advice on what to do and what not to do, to eat or not. There comes a day when they see Gueuleton pass by and say to themselves: ‘There you go, that’s exactly what I need!’ “ A starter, a main course, a dessert. Belly, foie gras, Salers entrecote, duck chest.

“We’re not here to please everyone, adds Vincent Bernard-Comparat. Our movement is concomitant with an era, without being a reaction to veganism. “ So it is not rare that the youngest customers – majority adherents to this awareness of good things – break the piggy bank to invite their grandparents, making “Gueuleton” rhyme with “transmission”. “Arthur and Vincent were able to return to basic values: those of our fathers and of the elders, notes Patrick Bertossi, linked to them as if by evidence. Their banter and simplicity do the rest. “

On the pure and hard business side, the brand’s “ambassadors” – Angers, Brive, Castelnaudary, Lyon, Aix-en-Provence, Segonzac soon… – are handpicked for “good taste”… and solvency (count in average between 150,000 and 200,000 euros for a turnkey installation). To spread everywhere in France, the inexhaustible leaders of Gueuleton have made the choice not of the franchise system, but of that of affiliation. “We transmit above all a network, not a know-how, explains Arthur Edange. This avoids the standardization of dishes, since each chef is free to choose his menu, his suppliers and even one of the two cutlery knives. “

A concept that is exported

The two partners donate 5% of the turnover of each bar or restaurant, where wood, stone, metal and cast iron predominate. 70% of the wine references are provided by Plaisirs du vin, Patrick Bertossi’s company. A way to give customers some benchmarks, at the same time as a margin of maneuver for the “tauliers”. Among the 700 membership requests received each year, some come from abroad; Belgium, Luxembourg, Switzerland and even Singapore in turn dream of tying their napkins around their necks and adopting, like a profession of faith, the motto of these kind ogres, “A healthy spirit in a pig”.

Not content with making salivate beyond the borders, the former roommates already have other pots on the fire. After their own breeding of black Gascon pigs, a distillery, a documentary, a magazine with ultra-polished iconography (6,500 subscribers) and a book in preparation with Hachette, Arthur Edange and Vincent Bernard-Comparat are working on creation, in Pau , a training center for Gueuleton teams (240 people).

Indeed, “Beyond the bottle of crozes that we put on the table, there must be substance, justifies one of them. A Meilleur Ouvrier de France who introduces you to the art of cutting is immediately more immersive and unifying. “ The meat, again and again, even on the right forearm of Emeric, the chef of “Gueuleton” Pau, tattooed with a prime rib. In two months, it will be a left side butcher’s leaf, stamped with the famous “G”. “Gueuleton, we have it in our blood! “