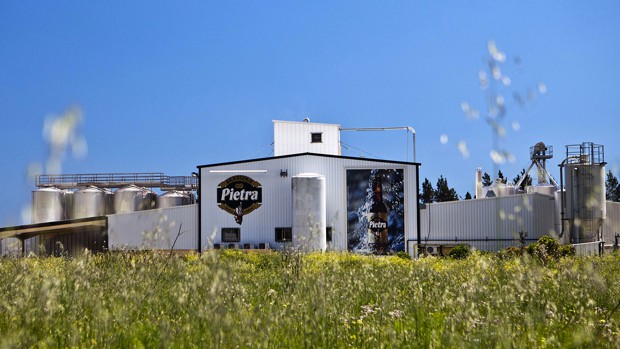 Behind the doors of the Brasserie Pietra, in the town of Furiani, in Haute-Corse, the machines are already on the way to ecological transition. Founded in 1996 by Armelle and Dominique Sialelli, the company began its ecological shift more than ten years ago. In 2010, the Corsican SME won the environmental label EnVol.

“The ecological transition is in the DNA of the brewery, for a very simple reason: we work on the water table”, notes Hugo Sialelli, Director of Development, and son of the two founders, who is one of the first thirty leaders to have signed the Business Climate Agreement which will begin in July 2021. The Pietra brewery achieves a turnover of 20 million euros. business, produces 100,000 hectoliters per year of a beer renowned for its blend of malts and chestnut flour, and employs 47 people.

In terms of the environment, the new roadmap for the family business is to obtain ISO 14001 certification, which is based on the principle of continuous improvement of environmental performance. It guides the fair use of water as much as the choice of packaging, with a double promise: more than three quarters of ISO 14001 certified companies report making a financial gain linked to the certification of their environmental management system. The 5,000 euros obtained at Ademe for the implementation of the standard will not cover the cost of the support invoiced. But they will help.

The Pietra brewery has already created an environment center to study energy consumption reduction projects, and to control and recover its waste. And, in the Furiani plant, UV sensors were installed at the outlet of the cleaning tanks to measure the quantity and quality of the water. The technology makes it possible to reduce the volumes consumed by 20%.

Installed at the end of 2020, for 350,000 euros, a energy recuperator must also reduce consumption by 30 to 40%. A biomass boiler, making it possible to produce energy using homemade organic waste, is also under study. The operation is estimated at 2 million euros.

Finally, for her supplies, Pietra is betting on the short circuit. For three years, it has launched tests on the creation of an agricultural sector: 60 hectares of malting barley have already been planted; the beginnings of a malt house are announced.