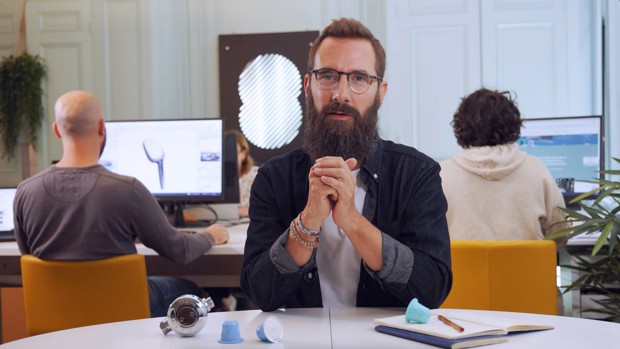 By leaving school at the age of 16 and deciding to join Canada without a work permit, it was truly self-taught that Nicholas [Pasquier] will form. He enters the world of work and then quickly climbs the ladder, from odd jobs in IT to management positions in the United States. On the strength of this experience, he launched into entrepreneurship in 1998 with 7èmeZone.com (a site to overcome geographical restrictions on DVDs), a success until the internet bubble burst in 2001. After a second adventure, punctuated by a takeover and a return to large groups, Nicolas discovered the world of luxury, which intrigues him by its ability to survive and increase in value whatever the context, in particular that of the 2008 crisis. (…)

It was in April 2012, while taking a “pleasant-tasting” shower after eating a macaron in a hotel in Toulouse, that he realized how well-being can have a positive impact in our stressful and hyper-connected daily lives. Back home, he tries to improve the shower experience and makes a first prototype built with a Kinder egg, to beautify the water in his shower for one minute by inserting food coloring into the flow of water. ‘water.

Today, that idea has evolved into Skinjay, a product released in March 2015 to the high-end hospitality industry. After four fundraisers and a strategic partnership with the leader in faucets in the United States, the product is used by 300 luxury hotels and 40,000 households around the world. Passionate about the human adventure represented by modern entrepreneurship and the values ​​that flow from it, Nicolas, now CEO, was kind enough to testify about his way of building his collective over the years.

Formalize the ideal so that it takes shape

From the beginning, my mission with Skinjay was to create a “family” in which everyone could express themselves freely and be aligned with themselves, without making up or forcing yourself. My philosophy: allow each member of the team to evolve in a work environment that allows him to be happy and fulfilled to give the best of himself. My first conviction as an entrepreneur is that if we don’t like working together, if we don’t like exchanging, we are unhappy in our work. Working well with others can only be done sustainably if the environment allows us to be ourselves!

To achieve this, the real complexity was to conceptualize and then rationalize the relationship to work, to hierarchy, to responsibility… then to test the receptivity of employees and the quality or deterioration of their interactions. At the very beginning, it was done by feeling. In my recruitments, for example, I based myself on intuition and feelings, relying on my many years of experience. As the company grew, we needed to write and formalize this “dream” professional relationship. At the end of our first year, I had already described elements, such as sharing, respect and listening, which governed our daily lives and our recruitment interviews. Moreover, the candidates were sometimes surprised by the content of our discussions during which we asked them who they were, what they wanted to do with their lives and what made them vibrate on a daily basis.

Erect values ​​as a backbone

My second conviction as an entrepreneur is that a company doesn’t exist: it’s simply a community of human beings who, beyond daily life, share a common goal and objectives. Each employee arrives in the company with his baggage and his educational straitjacket. You may be the most humanistic and open person there is, you may try to change in a benevolent way the way in which employees apprehend work, at the beginning, you feel a little alone and against everyone.

Managing a business and changing the work paradigm can be initiated by the business manager but will require team support and investment in the change. When we went from five to fifteen people, it seemed important to me to go further in describing our mission as a team and the values ​​that drive us, both by involving everyone in this work , and also by having us accompany. The motivation was to ensure that everyone could finally be themselves and bring the best to the company. (…)

A company on a human scale

Throughout our history, there have been significant frictions with certain employees, and we have messed up recruitments which may have affected the team. We then understood that this work of reflection on what we want to do together and on what we are as individuals and as a group was a daily task. Today, we don’t wait long months to talk about our values ​​and what unites us. Every Monday, we have a steering committee to make decisions on all cross-company topics.

We have now reduced the size of the team, so that everyone is fulfilled to be at 150%. If we recruit someone within the company, we are extremely attentive to their values ​​and their adequacy with the values ​​of the company because, with this long-term work, we have the feeling of having arrived at a ideal situation. Even if we are and we will always be “under construction”, we cannot take the risk of failing with the wrong person.

Fly The Nest supports entrepreneurs to succeed in their change of scale. This text is taken from their book, “Fly. The practical guide to a successful collective adventure”, published by Editions Dynamique Collective in May 2021, 400 pages, 19 euros.