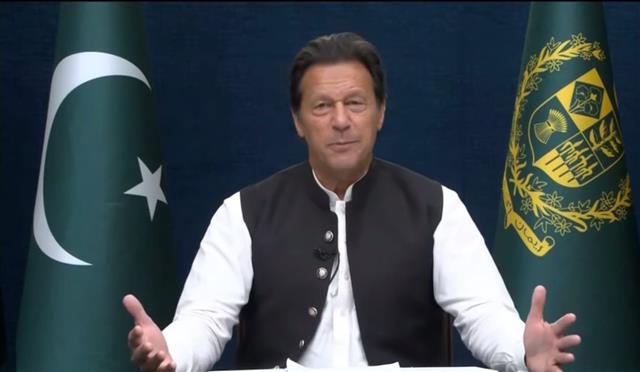 A defiant Pakistan Prime Minister Imran Khan said on Thursday that he will not resign despite losing the majority and insisted that he will play till the last ball and face the vote of no-confidence in the National Assembly on Sunday which will decide where the country will go.

In a live-address to the nation, the 69-year-old Khan also discussed a ‘threat letter’ and termed it as part of a foreign conspiracy to remove him as he was not acceptable for following an independent foreign policy. He named the US as the country behind the threat letter in what appeared to be a slip of tongue.

Khan’s address came at a critical juncture of his political career when he lost majority after defection from his Pakistan Tehreek-e-Insaf (PTI) party. Two of his allied parties also withdrew their support and joined the ranks of the opposition.

“The nation should decide where the country should gohellip;I always played until the last ball. I will never resign,” he said. “Those against me should have resignedhelp;they should not have sold themselves for money.”

Calling the rebel lawmakers as “traitors”, Khan said that they will be branded as such for the rest of their lives as he pleaded them to come back and foil the attempt topple his government.

“I will fight against the conspiracy and will never let it succeed,” Khan said as he vowed to face the no-trust vote in the assembly on Sunday.

The resolution against the embattled premier was tabled by the Leader of the Opposition in the National Assembly Shehbaz Sharif on March 28.

Khan needs 172 votes in the lower house of 342 to foil the Opposition’s bid to topple him. However, the Opposition claims it has the support of 175 lawmakers and the prime minister should resign immediately.

No Pakistani prime minister has ever completed a full five-year term in office. Also, no prime minister in Pakistan’s history has ever been ousted through a no-confidence motion, and Khan is the third premier to face the challenge.

Khan talked at length about the ‘threatening letter’ which he said was an official communication by Pakistan’s ambassador and showed that the opposition leaders were in contact with that country as it was written before the no-confidence move.

“They (officials of other country) said that if no confidence succeeds then things will be finehellip;but if Imran Khan remains in power, relations will deteriorate and you (Pakistan) will have to face problems,” Khan said, quoting from the document .

Khan said the foreign official knew that the ones who would come into power after him would have no issues taking orders from the external forces.

“But what is most disturbing is that our people, who are sitting here, are in contact with foreign powers,” he said, as he referred to the “three stooges” — Pakistan Muslim League-Nawaz president Shehbaz Sharif, Pakistan Peoples Party Co-chairman Asif Ali Zardari and Jamiat Ulema-e-Islam Maulana Fazlur Rehman.

Khan accused the trio of involvement in corruption and asked if that country would allow someone to become its leader if involved in corruption.

“Will foreign countries want such corrupt people in power in their states? They are ready to accept such corrupt politicians, but I am not acceptable to them,” Khan said.

Khan said he came to politics after he had everything including money and fame, and “I need nothing even today”.

He said one of his objectives to join politics was to give a sense of honor to his nation and bring it out of slavery.

“When I started politics, I included three things in my party’s manifesto. Justice, which means law is the same for the powerful and the weak. Humanity because there is kindness in an Islamic state, and third, self-reliance (khuddari) because a Muslim nation cannot be a slave,” he said.

Khan reminisced about attending a meeting chaired by former military leader Pervez Musharraf who said that it was important to join the US war on terror, as Musharraf said that “US was like a wounded bear” and could attack Pakistan.

The support was acceptable to the extent that “we all are against terrorism” but to support it militarily cost Pakistan 80,000 lives. No other state and ally of the US suffered like Pakistan, he said.

He said Pakistan got taunts from the US, drone attacks and mantra of “do more” instead of appreciation for its role in the war on terror. He said all politicians were afraid of America and never said anything against drone attacks.

“I said from day one after getting the government that our foreign policy will be for Pakistan and not against any other country,” he said.

“…Our policy was not anti-US, -Europe, or even India […] it became anti-Indian after New Delhi revoked the special status of Kashmir and broke international law in August 2019,” said Khan, who insists that the Kashmir dispute remained a big issue between the two countries.

India has repeatedly told Pakistan that Jammu and Kashmir “was, is and shall forever” remain an integral part of the country.

Earlier, Khan chaired a meeting of the National Security Committee which decided to issue a strong demarche to a country, that it did not name, over the “threatening letter”.

“The committee expressed grave concern at the communication, terming the language used by the foreign official as undiplomatic,” according to a statement issued by the Prime Minister’s Office.

“The Committee concluded that the communication amounted to blatant interference in the internal affairs of Pakistan by the country in question, which was unacceptable under any circumstances.”

Meanwhile, a highly placed source in the federal government told PTI on Thursday that backdoor talks between the government and the joint opposition are underway on the issue of no-confidence motion against Khan.

“Talks are focused on one-point – the joint opposition withdraws the no-trust motion against Khan and in return he dissolves the National Assembly calling for fresh elections,” the source said, adding that the “top man in the establishment may be a guarantor” if the understanding between the two reaches.

Khan came to power in 2018 with promises to create a ‘Naya Pakistan’ but miserably failed to address the basic problem of keeping the prices of commodities in control, giving air to the sails of opposition ships to make war on his government. PTI