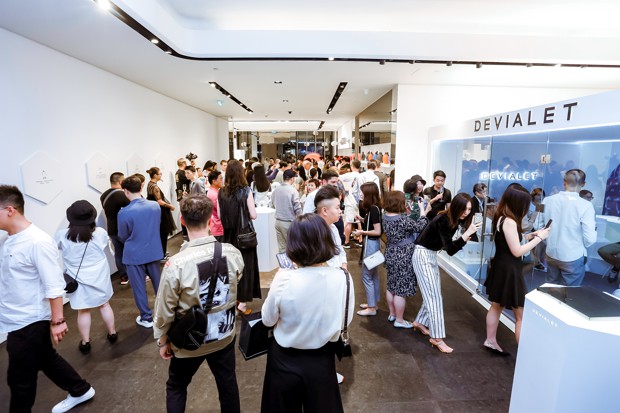 It was not won. By wishing to attack the Chinese market in 2016 with the installation of several dozen stores, Devialet wanted to deploy its strategy already at work in France and the United States. But faced with its failure, management opted for a less direct approach and in partnership with local actors. Five years later, China has become the third market for the French brand, generating 10% of its turnover, and should overtake France, the main source of income from 2024.

“We understood that we had to work with distributors to get the business off the ground there”, explains Franck Lebouchard, CEO of Devialet. The pivot began in 2019 and the company now has a presence in 140 stores, of which only 7 are owned. “We first identified the dealers who reached audiophiles with brands in our sector, and we signed agreements with them,” explains the manager.

Calls to the switchboard

But that’s not all. To successfully establish itself in China, Devialet literally knocked on the doors of industrial giants to offer them the opportunity to implement its technology in their products, continues Franck Lebouchard: “We started quite simply by calling the switchboard of these groups and asking talking to those in charge of R & D. Little by little, we had access to these people and we were able to show what we had already achieved with Free, Sky Where Belkin. “

Quickly, the French scale-up signed two decisive partnerships for its future in the country: first with Huawei, to launch a television, then another with Tencent. “These two operations have done a lot for our notoriety,” continues the CEO. We were also lucky to arrive at a good time, where French luxury is prized and where antagonism with the United States creates space for European brands. “

It is Martin ku, GoPro’s former sales manager in China, who took over as head of operations for Devialet there. He leads a team of ten people who will double in the next three months, but which also requires a special approach, explains Franck Lebouchard: “They are all Chinese, it is essential to succeed. You have to understand social networks, be agile on WeChat. On the other hand, for very large operations, I have to get involved. As long as our potential partners have not negotiated directly with me, they consider that this is not done. The human relationship is essential there, and we talk to each other every two months to maintain this relationship. “

With a growing wealthy class, Devialet has found a playground that he will nurture with great care over the next few years. Households earning more than 50,000 euros per year are its prime target and buyers of its speakers prefer the most expensive products such as the Phantom Gold.

To fuel this growth, the company is now working with local influencers and continues to work on new partnerships to integrate its techno. Three have already been signed, and a handful more are said to be in the works.