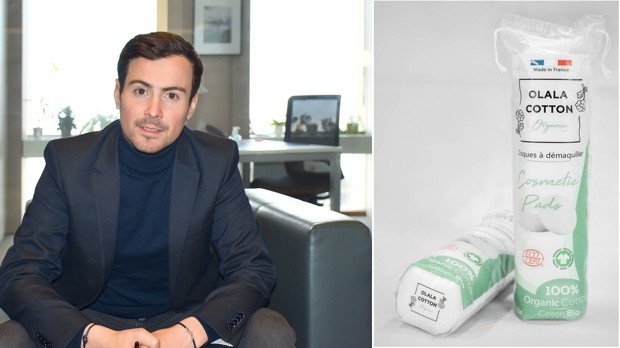 The export of Made in France hygiene and care products is the main activity of this Lyon very small business, around 70% of its turnover. Starting with organic cotton discs and make-up removal treatments made in Alsace by a private label specialist.

Imex-Co markets them under the Olala Cotton brand internationally, in Asia and the Middle East in particular. “In these countries, our everyday products are financially accessible to a large part of the population who can afford Made in France, an attractive label for Asian consumers”, argues the 30-year-old entrepreneur who employs a sales assistant. Together, they redoubled their efforts to succeed in making themselves known.

In drugstore in Dubai

No trade shows to promote the products? Imex-Co then turned to French chambers of commerce abroad. The French Business Council Dubai was thus responsible for identifying relevant contacts to approach, such as retail group buyers. The most powerful structures have their headquarters in the United Arab Emirates to shine throughout the Middle East.

Convincing these remote local buyers for a brand with few references is not easy. “We need to be very flexible, for example to facilitate testing”, admits Corentin Lupiéri. The French brand Olala Cotton should nevertheless debut in a Dubai drugstore chain within a few weeks. A significant gain in credibility to hope to open the doors of supermarket chains in the region.

Asia is the other major target region. A few containers have been shipped to South Korea and the first serious contacts have been made in Singapore, Thailand and Indonesia. Cédric Lupiéri knows these environments well. For four years, the young graduate of the IDRAC business school in Montpellier, carried out marketing missions for a real estate group in Bangkok. A period used to build a first professional network which is now proving very useful. Returned to France in 2018, he then managed the export to Asia and the Middle East of an industrial group of 600 people.

Not having been able to travel to Asia in recent months, the entrepreneur relies locally on independent agents. In Bangkok, one of these representatives carried out a field marketing study: price survey, state of competition, merchandising… Very concrete information to understand trends and prepare a commercial action plan.

While waiting to catch the plane, Corentin Lupiéri plans to take part in the “French Beauty Tour Southeast Asia” organized by Business France. Successively affecting several countries from July 1 to 9, 2021, this series of virtual events will allow French companies to identify and discuss with potential partners. The prospect of an imminent exit from the crisis now makes it plausible to participate in traditional demonstrations from next fall. Also, Imex-Co hopes to participate in the international Cosmoprof Asia fair from November 17 to 19 in Hong-Kong.