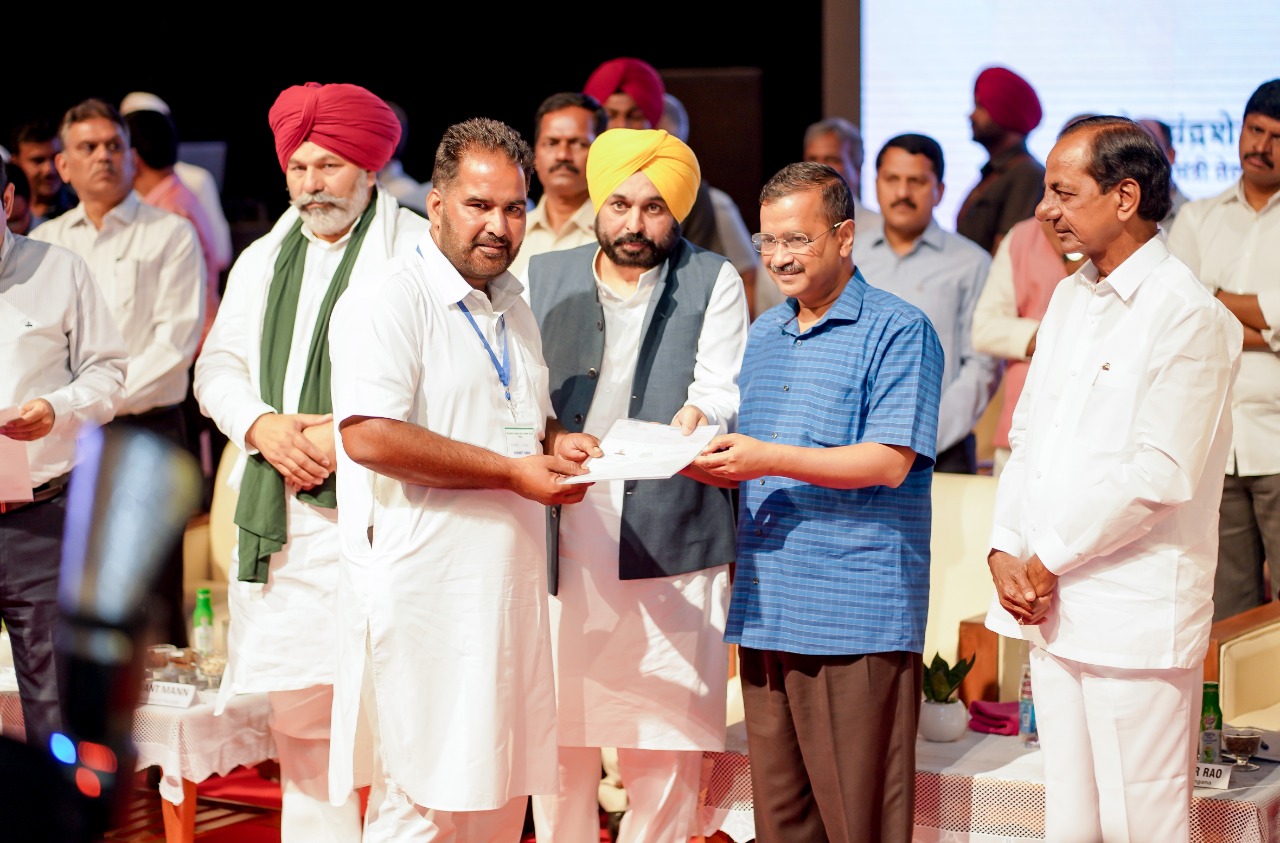 The political message is clear behind the getting together of three non-BJP Chief Ministers– Telangana’s K Chandrashekhar Rao, Delhi’s Arvind Kejriwal and Punjab’s Bhagwant Mann- on a common platform here to honor two segments of the society – martyred farmers of the year- long farmers struggle and the martyrs of Galwan Valley.

Not only is this “union-in-works” challenging the political might of the ruling BJP at the Centre, but also seeks to cater to the aspirations of two major “politically sensitive” segments. Since “nationalism” has been a majority political plank of the BJP, these non-BJP CMs today chose to woo these two segments that resonate with the “nationalism agenda”.

Not only did K Chandrashekhar Rao (KCR) tell the gathering of families of martyred farmers and soldiers here this afternoon to launch a farmers’ agitation across India, demanding a constitutional guarantee for MSP of all their crops, but slogans against BJP were also raised at the event, as the three Chief Ministers looked on. Rao told farmers that if they unitedly fought against the “dictatorial policies of Delhi sarkar (referring to Centre)” they could overthrow the Delhi government.

“We are with you in this struggle,” he said, while reminding Punjab farmers that they were referred to as terrorists and Khalistanis by the BJP leaders. He also openly challenged the decision of the Centre, asking for prepaid smart meters to be put up for agriculture consumers. This has also been a simmering issue in Punjab.

Earlier in the day, Rao and Kejriwal held meeting in Delhi “to discuss federal spirit and national politics”, said a message circulated from the office of the Telangana CM. At the event here today, Kejriwal also played along with Rao and said that since the farmers were protesting on the borders of Delhi, his government was under immense pressure from the Center to convert stadiums to jails, and send the protesting farmers there. “But we withstood this pressure to side with you,” he told the farmers.

Sources say that this initiative by Telangana’s KCR and AAP national convenor Arvind Kejriwal happens to be just ahead of the elections for the President of India. AAP does not have any Lok Sabha members (since Bhagwant Mann resigned, after becoming CM of Punjab), but has eight members in the Upper House and two more are to be elected now, taking the total rally of AAP to 10. Rao, say sources in AAP, is believed to be trying to build a national consensus on a non-BJP and non-Congress alternative for the President polls due in July, and also for the 2024 general elections. He is presently visiting non-BJP and non-Congress ruled states.

Speaking on the occasion, KCR thanked his “friends Arvind Kejriwal and farmer leader Rakesh Tikait” for joining him in extending some relief to the families. “It is a sad occasion. It’s a shame that even after seven decades of Independence, we have to have such events. There should be a national debate on where the problem lies. We are here only to express our sympathy with bereaved families, and tell them that we stand with them in their hour of need. I had spoken to Kejriwal when his party won elections in Punjab. He agreed to come here with me for this event,” he said.

Both Punjab CM Bhagwant Mann and Delhi CM Kejriwal, were met with a resounding applause when they got up to address the gathering. Mann told the farmers that his government would always stand by farmers. “The year long struggle was the biggest ever resistance against the tyranny of the Centre. But you braved all weathers and did not budge till your demands were met. Now that you have voted for us, I am striving to make you “karza mukt” , more important that “karza maafi”, he said, in an apparent jibe at the previous Congress government’s debt relief scheme.

Kejriwal said that though no price can be given for the immense struggle of farmers. “But please accept this to honor for their sacrifice. Now, our party is doing all within its powers to increase the income of farmers. Punjab government has announced to purchase moong on MSP and announced financial relief of Rs 1500 per acre for those going in for DSR. We will continue to take such farmer friendly decisions and establish a farming model here. Kisan ka beta kisan nahin banna chahta kyonki kisani fayda ka kaam nahin hai. I assure you that we will show how to make agriculture profitable, and change this trend,” he said.