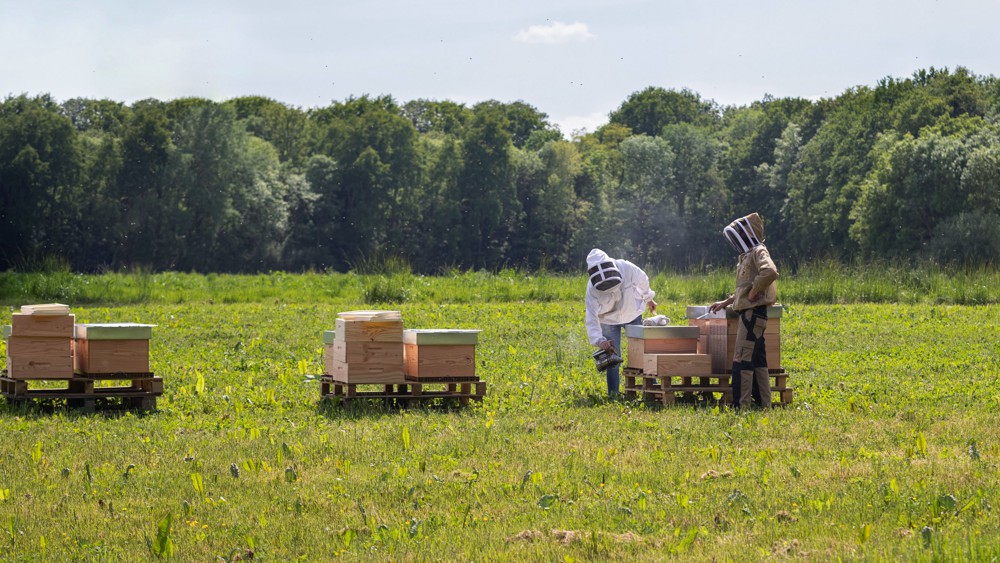 When you get off the train at La Verrière (Yvelines), you wonder how “the largest agricultural campus in the world” can be there, not far from a faded commercial area. And yet, after about ten minutes in one of the electric shuttles chartered by Hectar each morning, the landscape changes radically. Meadows, forests, herd of cows… In the village of Lévis-Saint-Nom, on 600 hectares of the Haute Vallée de Chevreuse regional nature park, you will find a farm at the end of the road.

But we quickly notice that the building, refurbished two years ago, is not an operation like the others. Once inside, when you push open the doors of the “stabulation” or the “menagerie”, you will find meeting rooms, conference rooms, coworking spaces or even offices, some still under construction.

Welcome to the headquarters of Hectar, the project of a woman named Audrey Bourolleau. After a career in wine, a stint in the campaign team and then in Emmanuel Macron’s cabinet, which she advised on agricultural matters, this forties decided to resign in July 2019. In December, she bought this farm with the financial support of Xavier Niel, boss of Iliad (Free) and founder of Station F, a Parisian start-up campus. “An investor in tune with the project, but who gives me total freedom,” emphasizes Audrey Bourolleau.

The goal for this busy and energetic woman, the granddaughter of farmers: “To respond to the great challenge of generational renewal in agriculture – 160,000 farmers will be missing by 2025 – and ecological transition. With the objective of carbon neutrality by 2050, there is no current agricultural model that will be profitable if it does not evolve. The common thread of the Hectar campus is therefore based on three pillars: sustainability, profitability and improving the lives of farmers to create vocations.

In the courtyard of the campus, about twenty young people discuss, who a beer, who a yogurt in hand. They are entrepreneurs from the first two promotions of the start-up accelerator, carried out in partnership with the HEC incubator. Although they evolve in a rather rural sector, they nevertheless have all the codes of startupers: anglicism in every sentence and familiarity in all circumstances.

With them, several farmers came to confront their daily reality with their entrepreneurial projects. This is one of the keys to the training envisaged by Hectar: ​​peer to peer. Randomly during a conversation, we thus hear a startuper rejoicing at going to do trials with one of the growers present, when another says, all smiles, having found by discussing a solution to a marketing problem that he had dragged on for several weeks.

Hectar’s managing director, Francis Nappez, explains that he wants to accelerate 80 start-ups in two years. “In respect with the three pillars of Hectar, we are looking for solutions accessible to farmers, which really change their lives”, explains the co-founder of BlaBlaCar. There are start-ups working on the reduction of chemical inputs or plant alternatives to meat.

“La ferme des Godets is about applied research, boots on your feet”.

Support for entrepreneurs is done individually, with a mentor and connection with partners who are specialists in each question that arises. On campus, events are regularly organized with actors from the agricultural world or more seasoned entrepreneurs. “We really want to create decisive meetings and allow discussions that would not take place without us”, explains Francis Nappez.

That’s what came for Simon Denonnain. With two former engineering school friends, he launched at the end of 2018 Aptimiz, a start-up that promises farmers to optimize their working time thanks to a smartphone application that analyzes their professional actions. “Hectar corresponded to our model and our growth challenges,” he explains. The accelerator gave us access to an ecosystem, a team and investors in tune with our start-up. »

A source of pride for this farmer’s son, Aptimiz is the first start-up accelerated by Hectar, which equipped the Godets farm, the other campus site, the other pillar of the project. This is not an educational farm, but a working farm. “It’s applied research boots on the feet”, sums up the former Elysian adviser.

In old buildings which had not seen cows for thirty-five years, Audrey Bourolleau had a milking parlor installed – second-hand, she specifies – and a processing workshop which has been producing yogurts for some time. weeks and soon cheese. Today, sixty dairy cows – more hardy Normans – graze on sixty hectares of grassland to produce 200,000 liters of milk per year.

“The idea is to create a turnkey model. Not a model to be copied exactly, but which gives milestones with adjustable criteria according to the constraints of each farmer”.

On this basis, Audrey Bourolleau seeks to build a model that respects the three pillars of the Hectar project. With an initial investment of 1.4 million euros, the constraint of making the profession of farmer desirable – respect for 35 hours, work one weekend out of three -, the desire not to take into account public aid for measuring the profitability of the project, the ecological dimension, choices had to be made. The cows thus live outside all year round, a way of avoiding having to invest in buildings. In return, it was necessary to build paths in the meadows, to facilitate the movement of the herds. Another example, since there is only one employee on site on weekends, each of the three employees – including the cheese maker – must be able to do the milking. All the procedures have therefore been written to allow everyone to start up the milking parlour.

These experiments are carried out with a watchword that constantly recurs in Audrey Bourolleau’s demonstrations: “Document. Everything is dissected to be optimized from a social, environmental and economic point of view, and to be replicable. “The idea is to create a turnkey model: not a model to be copied exactly, but which gives milestones with adjustable criteria according to the constraints of each farmer”, defends the founder of Hectar.

For this, the campus can also rely on developers who work on data collected by collars worn by the herd. Eventually, algorithms could make it possible – in addition to the “irreplaceable” look of the breeder, we insist at Hectar – to detect the slightest change in the behavior of the animals to anticipate a calving or an illness.

This pilot farm is more broadly in line with Hectar’s desire to develop new models of entrepreneurship in agriculture. The “Tremplin program” which welcomes future operators to support them in their installation project. Here again, very few “common core” courses, but personalized support, with mentors, regular reports.

The stories are numerous, as these Istanbulites arrived with the objective of making beef, and finally came out with a project of laying hens and organic market gardening. Or that of Jacques Bentz, 23 years old. The young man with the cap backwards, who could be confused with a startupeur, has decided to replant 2.5 hectares of vines near Saint-Dié-des-Vosges. In the field, he plans to raise pigs, 24 per year.

All this is still only at the beginning: in a few weeks he should obtain the right to plant his vines, and the pig Achille is waiting in the barnyard of the family property with his two females to be able to go and enjoy the Vosges hillside. . With a background in wine, Jacques came to Hectar to find “a framework” to think about his project. With hindsight, he praises the “network” to which this training gives him access. “We are taught concrete things, like pitching, which I had never done before, whereas it is 90% of the work when you go to see a banker! he also explains.

The course includes only two days on campus out of the five weeks of training. The rest of the time, intensive project work is done remotely. For each problem encountered, the Hectar teams look for the right contact who can help the learner. All the keys to entrepreneurship are also given: business plan, market research, communication bases, etc. However, the campus does not provide any technical training.

Driving political change from the ground

This is not enough to reassure everyone in agricultural education. At a time of budget cuts in the public, Hectar remains frowned upon by some who denounce “a public-private competition” deadly. “We need peasant agriculture, which allows peasants to live off their income. Mechanization is digitized at Hectar, but it is the same process developed since the 1950s”, also criticizes Clémentine Mattei, co-secretary general of Snetap-FSU.

Fears based on a lack of knowledge of Hectar, says the campus. Funding is private, it is insisted, except for retraining funded by the personal training account. As for the vision of agriculture promoted, Audrey Bourolleau defends a “pragmatic” approach: “We don’t choose agroecological chapels. In the “springboard” projects, there are both micro-farms and large farms.

The one who took over the hat of adviser to candidate Macron for the time of the 2022 campaign does she pay for her commitment? In any case, it “fully assumes” the “political” dimension of Hectar. “Doing politics means committing to fights. I led that of the agroecological transition at the political level. I do it at Hectar in a different way,” says Audrey Bourolleau bluntly.

After two years of Hectar’s existence, the entrepreneur does not intend to stop there. After the dairy farm, she is considering launching new pilot workshops. Above all, it promises the launch in September of a “Doctolib for agricultural training”, that is to say a platform which would make it possible to amplify the linking of actors and to “move to a larger scale this that we do today manually.

Audrey Bourolleau thus intends to attract new audiences seeking to increase their skills. “Agricultural cooperatives, industrialists, advisers or agricultural salespeople, who could come on site for a day and then take a few hours of peer-to-peer training,” she explains. With a whole sector of the economy in need of transformation.