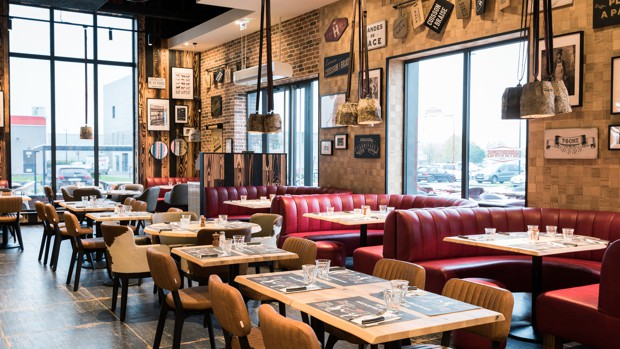 Opposite the Gare du Nord, in Paris, the fortieth Hippopotamus establishment displaying the brand’s new concept recently opened its doors after a renovation. This French-style steak house therefore offers charcoal cooking – a way of differentiating meat from the competition – and displays a friendly decor combining burnt wood panels and a brick effect on the wall, hanging lamps made of tree bark, and cutting boards playing small posters.

Taken over in 2017 by Groupe Bertrand when it bought Groupe Flo of which it was part, the brand wants, despite the Covid, not to weaken in its modernization. At the end of the year, 47 establishments will display its revisited face, i.e. just under 40% of a network shared equally between own and franchise restaurants.

And it won’t just be renovations. In Compiègne, a new Hippopotamus will be born at the beginning of November. Before openings by the end of 2020 in Eragny, Montauban and Le Mans.

For next year, 25 renovation projects are already on track. “The new concept represents a commercial success. Under normal operating conditions, it generates an average growth of 30% in turnover, due 25-26% to an increase in traffic and 3-4% to an increase in the average ticket. And even in a crisis never experienced like the one today, these restaurants continue to progress ”, observes the Managing Director of Hippopotamus Philippe Héry.

The brand, born in 1968, an emblematic year, also, despite the context, changed its menu on Thursday, October 22. In June, for the reopening of restaurants after confinement, a picked-up version was offered to customers. It is now possible to find rarer pieces of beef or sea bream. “By once again offering a very comprehensive menu, we hope to increase the frequency of visits”, explains Philippe Héry.

And everything is done to reassure customers, from disposable placemats indicating the menu, to cutlery neatly wrapped in a paper sleeve and glasses placed upside down.

A new loyalty strategy has also been put in place. Based entirely on digital, the program should help attract young customers with offers tailored to each one as well as discounts to encourage further exploration of the menu.

As with many actors, click & collect and delivery have also become new spearheads for the chain. They are available in almost all restaurants and represent, since June, 5% of turnover with an average basket of 31 euros, higher than that achieved in the dining room.

The curfew has of course already had consequences. After the first wave of announcements, the company has decided to close a dozen restaurants in the evening, from Monday to Thursday. They of course remain open for lunch and all day the rest of the week. Others could follow after the expansion of the number of departments concerned.

In January, the year promised to be even more promising than 2019 when the brand had generated a turnover excluding tax of 206 million euros, up 8.5%. Even if it is pleased to have resisted better than the market, the Covid caused sales to fall by 52.5% in the first half of 2020 when the impact of the closure lasting up to three months in the Paris region was made feel full.

But Philippe Héry is already planning for the next few years. By the end of 2022, the entire network should have been modernized. And the leader wants that by this time the share of the franchise increases to 70% instead of the current 50%. He also estimates that in the longer term, even though the grill market is very competitive, the brand has the capacity to more than double in size with 150 to 200 more establishments.