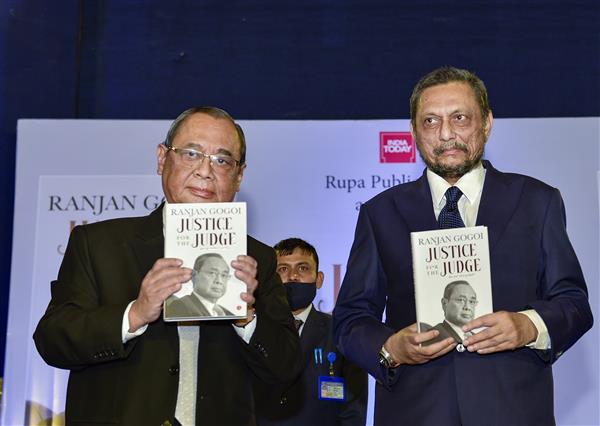 More than two-and-a-half years after he was exonerated by an in-house panel of sexual harassment charges leveled by a Supreme Court employee, former Chief Justice of India Ranjan Gogoi on Wednesday admitted that it was a mistake on his part to be on the Bench in the case.

“In hindsight, I should not have been a judge on the Bench. It might have been better if I was not part of the bench. We all make mistakes. No harm in accepting it,” Justice Gogoi told India Today TV after being asked if it was wrong for him to be a part of the Bench which took up the matter regarding of sexual harassment against him.

Speaking at the launch of his autobiography ‘Justice for the Judge’, Justice Gogoi said it happened because 45 years of his hard work in the Bar and Bench was being spoiled. The book was launched by former CJI SA Bobde, who described Justice Gogoi as “a reluctant man of destiny”.

“Why I said justice Gogoi is a reluctant man of destiny?…there is a story in Assam that his father’s law minister asked if his son would become chief minister like him, he said no but he added that he had the potential to become the chief justice of India,” Justice Bobde said.

Talking about the Ayodhya case, he said, “I didn’t bring Ayodhya out of the cold storage. My predecessors left that for me. So, I had only two options to either fight or flight. And as Justice Bobde mentioned, I come from a family of warriors. So, of course…I fight.”

Asked why Kashmir related cases were not taken up expeditiously, Justice Gogoi said, “I didn’t let the Kashmir cases hibernate. I assigned it to the alternate bench because I had the Ayodhya case to look at. But on my watch, the Kashmir case was not hibernated or shelved. It was assigned to a bench of reputed senior judges…We don’t monitor the work of our brother judges in the judiciary.”

“What was right was not said. What was said was not right,” he said, “I am least convinced about the Rajya Sabha seat offered to me as quid pro quo for the Ayodhya judgment. These are all made up by the media and newspapers.”

He asserted that there was nil interference by the Executive in the Judiciary.