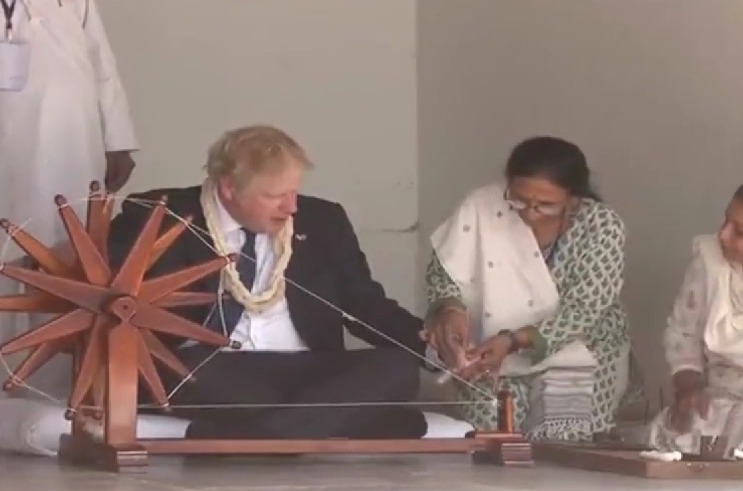 British Prime Minister Boris Johnson will announce a raft of commercial agreements and hail a “new era” in bilateral trade and investment ties during his visit to India, the UK High Commission said on Thursday shortly before he landed in Gujarat.

It said the UK and Indian businesses will confirm more than one billion pounds ((1 GBP= Rs 99.63) in new investments and export deals in areas from software engineering to health, creating almost 11,000 jobs across the UK.

“As I arrive in India today, I see vast possibilities for what our two great nations can achieve together. From next-generation 5G telecoms and AI to new partnerships in health research and renewable energy — the UK and India are leading the world, ” Johnson was quoted as saying by the high commission.

“Our powerhouse partnership is delivering jobs, growth and opportunities for our people, and it will only go from strength-to-strength in the coming years,” he said.

Johnson will hold talks with Prime Minister Narendra Modi in New Delhi on Friday after concluding his engagements in Gujarat on Thursday.

The two leaders are expected to delve extensively to further expand ties in various key sectors, including defense and trade besides exchanging views on the crisis in Ukraine.

In a statement, the high commission said Johnson will use his visit to India to “boost our collaboration with one of the world’s fastest growing economies, slashing trade barriers for UK businesses and driving jobs and growth at home.”

It said the UK will confirm major new science and tech collaboration, including a digital health partnership and a joint investment fund for Indian deep-tech and AI start-ups, supported by the UK and Indian governments.

“As he moves on to New Delhi on Friday, the prime minister will also use this week’s visit to drive progress in negotiations on the landmark UK-India free trade agreement, which is expected to help double our trade and investment by 2030,” the high commission said.

“Negotiating teams will hold their third round of formal talks in India next week,” it said.

“And today our governments will announce new measures to make it easier to export UK-made medical devices to India. This will support UK jobs and create opportunities for British med-tech companies like Redcar-based Micropore Technologies to sell their lifesaving products in India , an import market worth 2.4 billion pounds,” it said.

In Gujarat, the British prime minister is scheduled to visit a new factory being opened by a top British firm as well as a biotechnology university working in collaboration with the University of Edinburgh.

The new investments worth one billion pounds will include setting up of a new Switch Mobility electric bus Ramp;D center in the UK and the opening of their Asia Pacific headquarters in Chennai.

The new initiatives also include Indian firm Bharat Forge and electric truck maker Tevva Motors expanding to a new site in the south-east and creating 500 new jobs and Indian software company Mastek investing 79 million pounds to create 1600 jobs over the next three years all over the UK, according to the high commission.

It said the new investments will also include business consultancy FirstSource opening new offices in South Wales, the Midlands and cities in the North-East and North-West and Hertfordshire-based firm Smith amp; Nephew agreeing to a major export deal to sell robotic surgical systems in India.

The India-UK relationship was elevated to a Comprehensive Strategic Partnership during the India-UK virtual summit held between Modi and Johnson in May last year.

At the summit, the two sides adopted a 10-year-roadmap to expand ties in key areas of trade and economy, defense and security, climate change and people-to-people connections among others. PTI