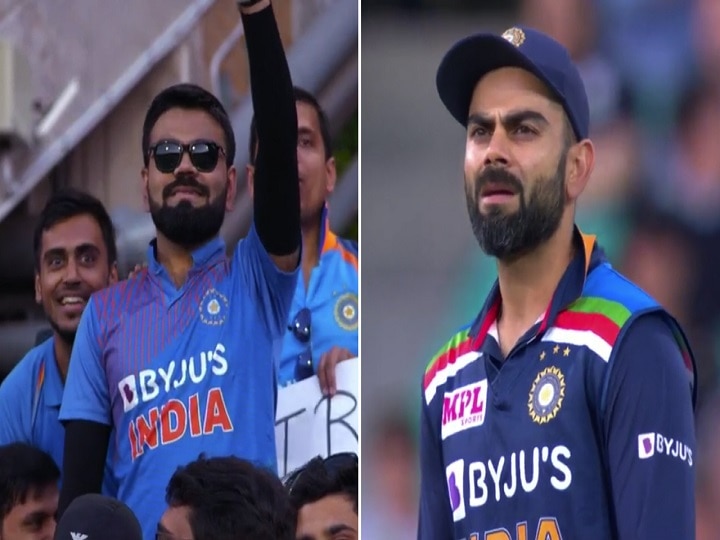 India lost by 12 runs to Australia in the third T20 match played at the Sydney Cricket Ground. But there was an interesting sight in the third T20. In the audience gallery, Team India captain Virat Kohli was seen enjoying the duplicate match. The real Virat Kohli was also surprised to see his duplicate. The picture and video of duplicate Kohli is becoming quite viral on social media. People are also sharing different types of mimes.

What you what you get
Order pic.twitter.com/GiloH9Dzps

2. Picture of the real person at the end of movie. pic.twitter.com/zhFi5ySO1Q

India loses despite Kohli’s 85 runs
Despite losing by 12 runs, India won the three-match series 2-1. India had a target of 187 runs to win, but despite the captain’s brilliant innings, he could only score 174 runs for seven wickets in the prescribed 20 overs. The reason for this is that only Kohli can walk towards India. Shikhar Dhawan scored 74 runs for the second wicket with Kohli scoring 28 runs while Hardik Pandya (20) shared 44 runs for the fifth wicket.

Kohli hit four fours and three sixes in his 61-ball innings. In the end, Shardul Thakur tried his best to cross India’s naya by scoring 17 not out with the help of two sixes on seven balls but he could not succeed. Australia’s Mitchell Swepson, who took three important wickets in this match, was adjudged Man of the Match, while Hardik Pandya of India, who played many excellent innings, received the Man of the Series award.

read this also-
IND vs AUS: Test series begins from December 17, know where and when the match will be played

IND vs AUS: David Warner wrote a touching message, said – T is happy for Natarajan even after losing the series