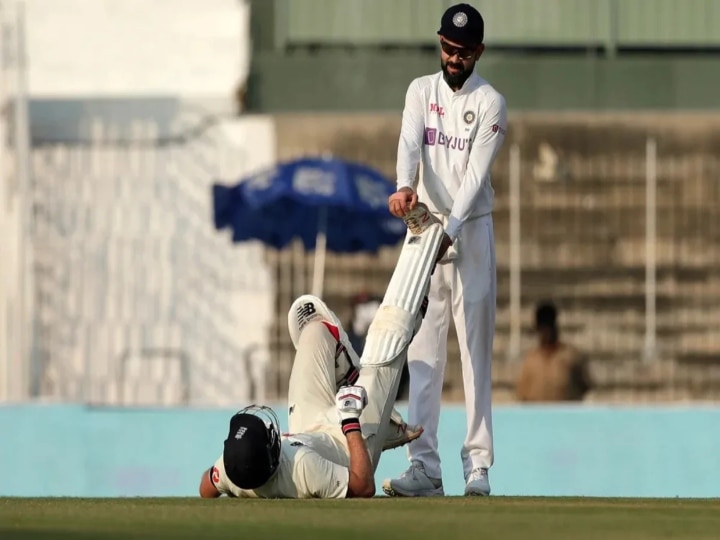 India vs England: Sports spirit is very important in cricket called ‘Gentleman’s game’. Its example was also seen on the first day of the first Test being played on the Chepauk ground between India and England. Actually, after hitting a six in Chepauk, the century which fell due to root cramp, Virat Kohli came forward to help him and worked as a physio. Everyone has admired Kohli’s sporting spirit.

This incident is of the 87th over of England’s innings. When Joe Root played a slog sweep off Ashwin, he fell on the ground due to cramp. After this, Root hinted to send physio to England’s dressing room. But before Physio, Indian captain Virat Kohli reached out to help him. Kohli held Root’s leg and stretched him, after which Fyzio did not have to come to the ground. This picture of Kohli is becoming increasingly viral on social media.

The International Cricket Council (ICC) shared the video of the incident on social media and wrote, “Virat Kohli has shown heart-warming sportsmanship.”

Virat Kohli with a heart-warming Spirit of Cricket gesture 👏pic.twitter.com/aFFV1RoGpb

Captain Joe Root, playing his 100th Test, hit a brilliant century. He has become the 9th cricketer in the world to score a century in the 100th Test. This is Root’s 20th century in Test cricket. He returned unbeaten after scoring 128 runs. During this, he hit 14 fours and a six.

Before the rout, Colin Cowdrey, Javed Miandad, Gordon Greenidge, Alec Stewart, Inzamam-ul-Haq, Ricky Ponting (centuries in both innings), Graeme Smith and Hashim Amla have scored centuries in their 100th Test match, with Root off Ravichandran Ashwin. He completed his century with a single.

Significantly, thanks to Joe Root’s brilliant century, England have scored 263 runs at the loss of three wickets till the end of the first day of the first Test being played at the MA Chidambaram Stadium. Root returned unbeaten after making 128 runs. At the same time, opener Domnik Sibley scored 87 runs in the last over of the day and was dismissed by Bumrah.

IND vs ENG: Joe Root, who scored a century in Chepauk, told how much English team wants to score in the first innings