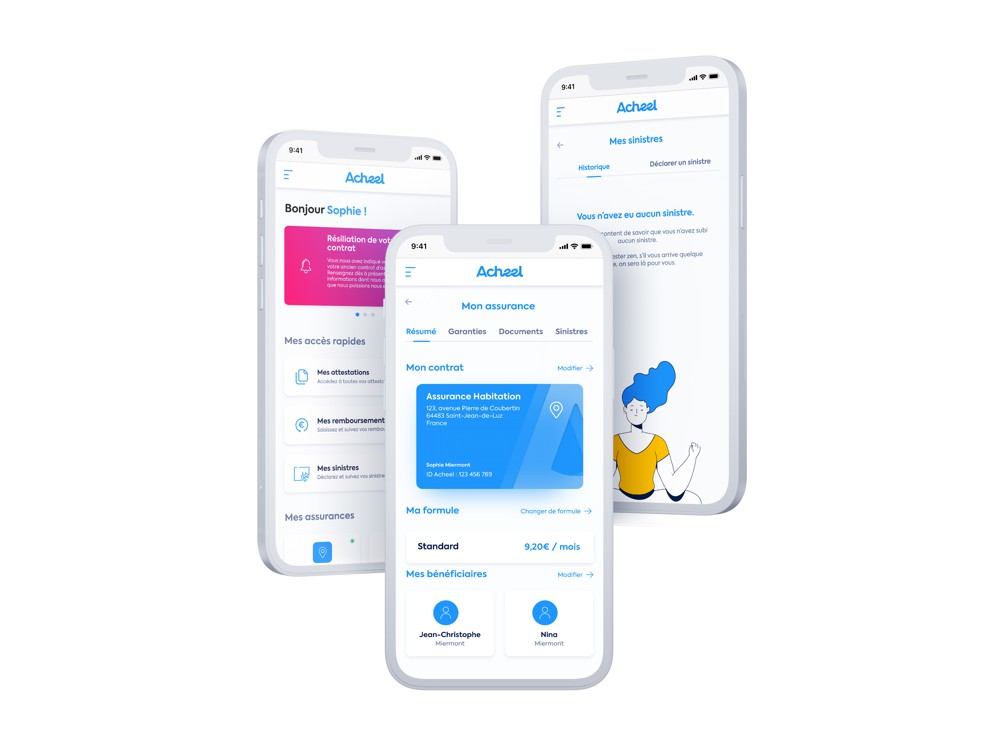 There are symbolic thresholds that mark the life of a start-up. The insurtech Acheel, which launched a year ago on the home insurance and health insurance markets, has already passed the bar of 100,000 contracts signed. The unicorn Alan, positioned only on health, took three and a half years to reach this amount while Luko, specialized in housing, had it for eighteen months.

About 50% of the contracts come from its direct insurance sales activity, with a strong dominance in housing and dog-cat. The other half comes from partnerships – mainly in health – forged with brokers and wholesalers like Santiane and Meilleurtaux. “We now sign several thousand healthcare contracts per month, which is rare in this sector”, welcomes Ralph Ruimy, co-founder and CEO of Acheel. A beautiful cash cow since the premiums in health are high.

A model that mixes B to B and B to C

This B to B activity, which is similar to that of Wakam (formerly Parisienne Assurances), consists of building tailor-made products for third parties. “Usually, a player will take twelve to eighteen months before making a product available to an insurer. At Acheel, we do it in two months,” assures Ralph Ruimy. In twelve months, the insurtech, which has an insurance license, collected 35 million euros in premiums.

“When you rely on brokers and wholesalers, you quickly gain volume. It’s very interesting to have immediately worked in B to B when most insurtechs only do B to C”, underlines Florian Graillot, founder of Astorya Ventures, a venture capital fund specializing in ‘insurtech, which refers to the French start-ups Luko, Leocare or even Lovys.

Its acquisition cost, all products combined (health, housing, dog-cat and non-occupant owner) amounts to 70 euros and that of housing is around 50 euros. About 30% less than traditional insurers. Nothing surprising for the two co-founders of Acheel who both come from the world of acquisition (one in insurance and the other in digital).

Acheel is rather one of the start-ups that watch their expenses. In particular, it has automated many processes such as claims management, a major cost center in insurance. To reimburse a dog-cat claim, for example, at no time will a manager take charge of the file.

“They are very pragmatic entrepreneurs who have a culture of profitability. They burn three to four times less cash than other insurtechs at their stage of maturity”, notes Jean de La Rochebrochard, partner at Kima Ventures, which is also in the capital of Alan and Luko. “We have already refused B to B contracts because we knew it would not be profitable”, illustrates Francky Défossé, another co-founder of Acheel.

For the moment, the insurtech does not yet have too many claims (because it is very young) and therefore does not yet lose a lot of money. The two founders even claim to have spent “only” 5 million of their 29 million euro fundraising – part of it having to be blocked anyway for regulatory reasons.

This management as a good father does not prevent them from having an ambitious growth plan: 200,000 contracts and 70 million euros in premiums by the end of the year. To achieve this, Acheel will notably launch car insurance at the end of the month, a product which has a high premium and which drains volume online.

“We already have thousands of pre-registrations”, slips Ralph Ruimy. Unlike their other products, car insurance rates will not be cheaper than those on the market, but it will be tailored for all types of drivers, even those with large penalties. Acheel plans to expand into Southern Europe in 2023…as competitors Luko and Leocare have done in recent months.