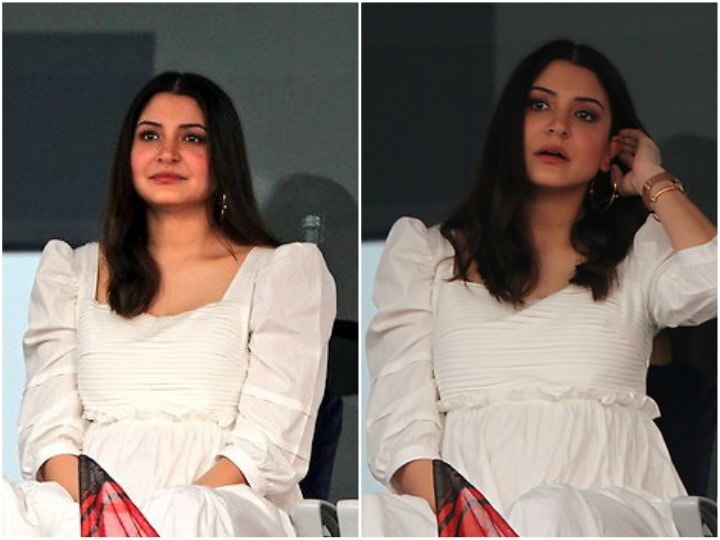 IPL 2020: The 55th match of IPL 2020 between Delhi Capitals and Royal Challengers Bangalore was played on Monday at Sheikh Zayed Stadium in Abu Dhabi. Delhi qualified for the playoffs for the second time in a row by defeating Bangalore by six wickets. However, even after the defeat, the Bangalore team qualified for the playoffs. During this match, husband Virat Kohli’s team reached Anushka Sharma Stadium to support RCB. Anushka was seen wearing a white color dress during this time.

In this dress, the baby bump of the actress can be seen clearly. Anushka looked very beautiful in this dress. Anushka Sharma’s pictures during the match are becoming fiercely viral on social media. People are giving different reactions by commenting. Please tell that Anushka is in Dubai at this time.

During the match, Anushka was seen sitting in the spectator stand with Yuzvendra Chahal’s fiance Dhanshree. Recently, a romantic picture of Anushka and Virat went viral on social media. This photo was posted by Virat Kohli on his Instagram account. This picture was clicked by AB de Villiers.

In this match, the RCB team came out to bat first after losing the toss and scored 152 runs in the prescribed 20 overs at the loss of 7 wickets. Chasing 153 runs, the Delhi team achieved the target by losing 4 wickets. In this match, Virat Kohli scored 29 runs from 24 balls. During this innings, he hit 2 fours and 1 six.