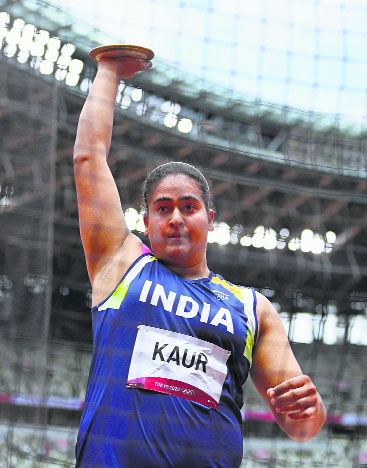 Kamalpreet Kaur , of Kabarwala village in Punjab’s Muktsar district, produced a top performance in women’s discus throw to qualify for the final in second position, ahead of defending champion Sandra Perkovic (63.75m) of Croatia and current world champion Yaime Perez (63.18m) of Cuba.

Kamalpreet’s best effort today, 64.00 meters, is 2.59m short of her national record of 66.59m, which she set in Patiala in June. Five years ago at Rio 2016, bronze went to Denia Caballero in 65.34m. If Kamalpreet equals her national mark in the finals on Monday, there’s every chance that she would return to Kabarwala with a medal.

The 25-year-old Kamalpreet, who took to sport in order to get a job and avoid an early marriage, was one of two automatic qualifiers for the final, the other being American Valarie Allman in 66.42m. Olympics is a big occasion. I was feeling nervous before the throw. But after the first throw I felt better. By the third throw I was confident and that is why I touched 64m mark,” Kamalpreet said later. “I think I will be confident during the final. I feel I can better my personal best and win a medal for the country. That is my sole target now.”

Incidentally, Perkovic qualified at third and Perez at seventh.

Veteran Seema Punia exited after finishing sixth in qualification A and 16th overall with a below-par 60.57m. In men’s long jump, national record-holder M Sreeshankar had a bad day as he finished 13th in his group — and 25th out of 29 competitors overall — with a day’s best of 7.69m.

Reigning world champion PV Sindhu’s hopes of securing India’s first-ever Olympics gold in badminton came crashing down as she slumped to a straight-game defeat to world No.1 Tai Tzu Ying of Chinese Taipei in the women’s singles semifinals here today. The 26-year-old silver medalist from the Rio Games, however, remained in the hunt for a bronze and will be competing against China’s He Bing Jiao in the third place playoff at the Musashino Forest Plaza tomorrow.

One of the most consistent players, who has claimed medals at all big events in the last five years, Sindhu couldn’t counter Tai Tzu’s deception with her aggressive game, going down 21-18 21-12 in the 40-minute clash.

“I’m a bit sad because it’s the semifinals, but I tried my best, it’s just not my day. I fought until the end,” said Sindhu after the match. “I was prepared for her skills, so I don’t think that troubled me a lot. At the end of the day the level of the semifinals is going to be really high…you can’t expect easy points. I just couldn’ t be on the winning side.” — TNS, Agencies

Caeleb Dressel and Katie Ledecky added to the US gold medal, while Australia picked up an incredible seventh swim title and Britain won the Olympics’ inaugural mixed 4×100 medley relay for their fourth swimming gold.

Belinda Bencic became the first Swiss woman to win a tennis gold medal at the Olympics with a victory in the singles final on Saturday, while Novak Djokovic went home empty-handed for the third successive Games. Djokovic withdrew from his mixed doubles contest with a shoulder injury shortly after being beaten 6-4 6-7(6) 6-3 by Spain’s Pablo Carreno Busta in the singles bronze-medal match. World No. 12 Bencic outlasted Marketa Vondrousova of the Czech Republic 7-5 2-6 6-3 in a nervy final to become the first Swiss to win an Olympic singles title since Marc Rosset won the men’s event in 1992.

Nigerian sprinter and 2008 Olympics long jump silver medallist Blessing Okagbare’s Tokyo Games ended abruptly on Saturday after she was provisionally suspended following a positive test for human growth hormone, the Athletics Integrity Unit said in a statement. The 32-year-old had comfortably won her 100m heat in with a time of 11.05s qualifying for Saturday’s semifinals. Agencies