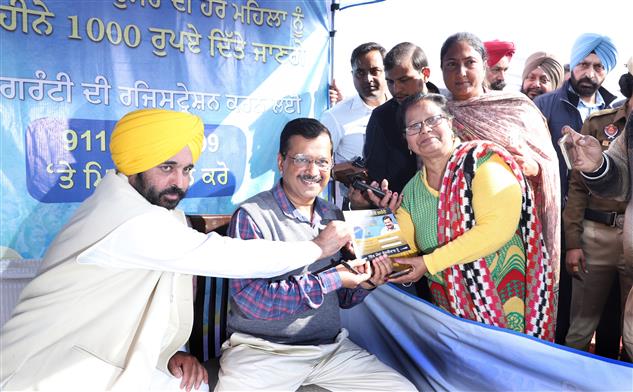 AAP national convenor Arvind Kejriwal started a registration drive in Punjab on Tuesday following his promise that Rs 1,000 would be given to women if his party comes to power in Punjab after the 2022 Assembly polls.

Kejriwal, who was on a daylong visit to Punjab, launched the drive from Sarai Khas village in Kartarpur here.

The Aam Aadmi Party (AAP) released a mobile phone number on which women have to give a missed call for registration.

Kejriwal said women just have to give a missed call on the number and they will get Rs 1,000 per month after the formation of the AAP government in the state.

The Delhi chief minister had earlier promised to give Rs 1,000 to women every month if his party forms the government in Punjab.

Seeing to give a reply to his political opponents who questioned him over the funds needed to honor the promise, the AAP leader said he will stop the Rs 20,000 crore illegal sand mining activity after his party comes to power and fund the scheme with that money.

“We will stop the theft of Rs 20,000 crore through illegal sand mining and arrange Rs 1,000 to be given to women from that money,” he said.

Kejriwal said the women of Punjab are very hard working and the sum of Rs 1,000 per month is for their empowerment and to make them financially stronger.

Meanwhile, Punjab Congress chief Navjot Singh Sidhu asked Kejriwal how he would fund the “freebies” that he has been announcing for the people of the state.

“Punjabis want to know @ArvindKejriwal Ji, How’ll you finance freebies you announce daily? Stop fooling People, if you can’t provide basic economic backing for promises. Punjabis deserve Income not Bheekh—Punjab Model is Model to provide income & opportunities for all Punjabis,” he said in a tweet. —PTI