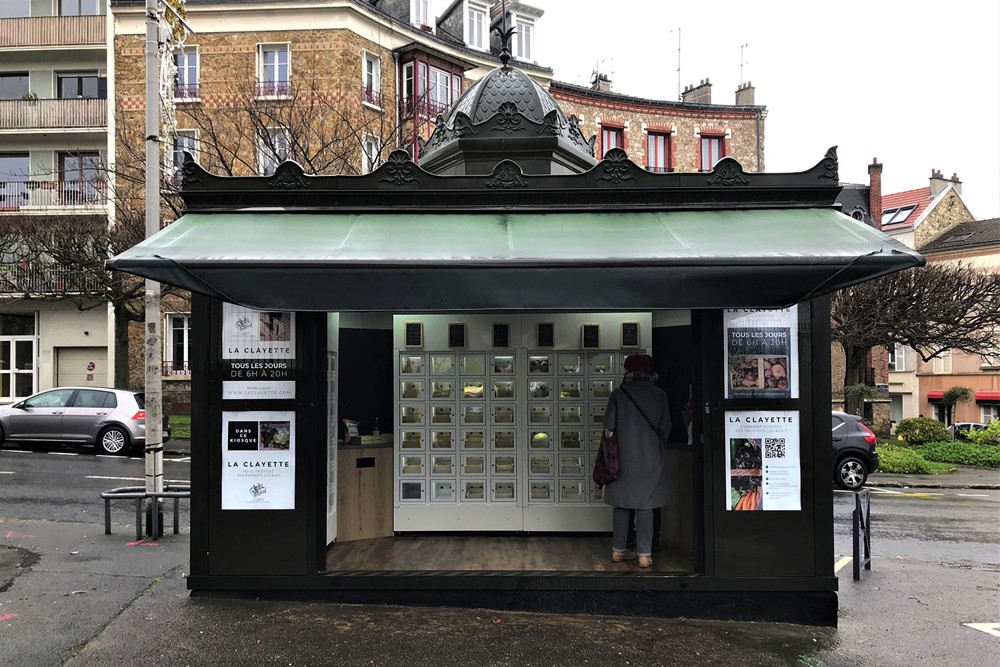 At the kiosk in Place Aristide-Briand, in Meudon (Hauts-de-Seine), passers-by no longer come to buy their newspapers. Since January 10, they have been lining up to buy farm products. This transformation is the work of Médiakiosk, a subsidiary of JCDecaux, owner of the kiosk, in association with the start-up “La Clayette”.

The kiosk now houses 76 refrigerated and connected lockers that offer a wide choice of fresh products: fruits, vegetables, eggs, but also “aperitif” baskets with sausage, apple juice and crisps. In all, a dozen formulas between 4.90 euros, for the box of twelve eggs and 12 euros for the aperitif basket.

An idea from the founder of La Clayette

Use is simple: consumers select and buy the basket they are interested in using a payment terminal. The chosen locker opens and they can retrieve their contents. They are simply asked to leave the “shelf”, a sort of crate that contains the vegetables, to stay in a zero waste approach. The kiosk is open every day and has adapted to the curfew hours: it is operational between 6 a.m. and 6 p.m.

The founder of the start-up La Clayette, a young engineering school graduate, Nicolas Drique, invested 40,000 euros in the project after a market study. Convinced that it was possible to develop an offer of short-circuit products at reasonable prices, he contacted Mediakiosk, which offered to rent the Meudon kiosk. “Since the start of confinement, we have seen a paradigm shift. People want more in short circuit ”, assures Marc Bollaert, director of Mediakiosk

The company has also been seeking for several years to diversify its activity. Of the 780 kiosks it manages in France, 647 sell newspapers. The 133 others offer different services: neighborhood concierge, fast food, florists, roasters … La Clayette is the first fruit and vegetable distributor kiosk.

Short circuit: a single intermediary between producers and consumers

And it’s a success: since it opened on January 10, 900 customers have come to shop at La Clayette. It is therefore urgent for Nicolas Drique to find an employee to support him. For the moment, he is responsible for supplying La Clayette, three times a week. It moves itself up to producers, mostly located in Eure et Loire, or in the Somme.

One way, according to him, to recreate the link, despite the disembodied aspect of the vending machine: “We remove the proximity between consumer and trader, he admits, but we create a new one with the producer by removing intermediaries”. If the success of the Clayette de Meudon is confirmed, the entrepreneur hopes to open other kiosks on the same model.