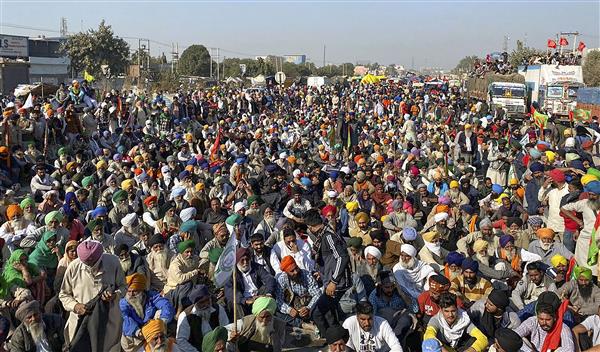 The cyberspace is abuzz with links for protests petitions being shared not just here but in the UK, Canada, Australia and the US in favor of the farmers’ agitation against three recently passed farm laws.

Over the last two days, over two lakh people have signed petitions demanding justice for the farmers. The rapidly growing petitions have in fact been started by Indian nationals living in the UK, Canada and the US.

A large part of Indian diaspora in these countries comprises Sikhs from India’s Punjab province, which also happens to be the hotbed of the ongoing farmers’ agitation.

The biggest petition among these was started by the American Sikh Council, and has been signed by over 50,000 people over the last three days. Like, a petition by Prabhjot Bath, a resident of the UK, has received over 50,000 signatures.

Another rapidly growing petition, titled ‘Justice for farmers of India’, was started by Canada-based Gina Takhar on Saturday. “My grandfather used to say that once in your life you need a doctor, a lawyer, a policemen and a preacher, but everyday, three times a day, you need a farmer,” she said quoting motivational speaker Brenda Schoepp.

Mindy Athwal’s petition, started from Wolverhampton in the UK, has been signed by over 30,000 people, while a similar number of people have signed another petition by Parminder Brar, a resident of Canada.

A petition by Ravinder Uppal from Birmingham in the UK has been signed by almost 10,000 citizens, while another one started by US-based Kiran Badesha has received over 4000 signatures.

“The backbone, sweat and tears of our farmers have fed millions and raised generations of Indians. Without whom, millions would have starved and generations would have never left the country. We need them, and they need us more than ever, today, ”says Kiran in the petition.

Most petitions seek a rollback or rethink on the new farm laws. However, some like Chandigarh resident, Shubh Karman wants Navdeep Singh, the son of a farmer to be acquitted in his petition. Navdeep shot to fame on Friday after images of him climbing atop a water cannon being used on the farmers to turn off the tap went viral. Navdeep was charged with attempt to murder.

Shubh writes, “Authorities could have avoided all this through a peaceful dialogue which is being demanded by the protesting farmers from the very first day. Please sign my petition to bring the government’s attention towards the much needed peaceful dialogue, establishment of grievance redressal mechanism along with the inclusion of the MSP clause in writing by the government. Also, all farmers forcefully arrested and booked should be released and acquitted. “

Another Chandigarh resident, Harman Singh Siddhu has petitioned the PM, raising several concerns via his petition.

This has shaken the national consciousness. Let us raise our voices in support of these farmers so that it reaches the top echelons so they do not mistreat our hardworking farmers instead agree to their genuine demand, ”says Siddhu.

Nida Hasan, country director of Change.org, hoped the situation would be resolved soon.

“Change.org as a people’s platform consistently concerns concerns of citizens, which is true of the farmer’s stir as well. I really hope that the standoff is resolved peacefully through mutual dialogue, ”she said.