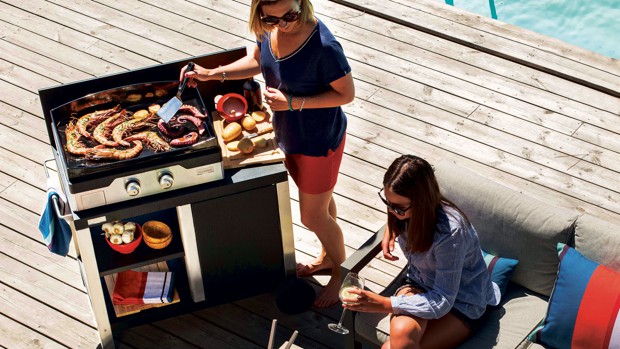 The company Le Marquier, at the origin of the first planchas in France, took advantage of the sparks of the market in 2020. Confined to the beginning of spring, the French with a garden or a terrace cooked outside. As a result, the Bayonne SME, which is celebrating its 50th anniversary, saw its turnover soar by 20% in the midst of a pandemic to 10.6 million euros, after two months of closure. And it returned to profitability.

“Our volumes have doubled in one year, it’s great, but at the same time, it creates tensions in the manufacturing”, indicates Régis Flusin, a former giant Weber, who bought Le Marquier with his partner in 2017. To cope with the explosion in demand, the teams (75 employees) have been working in three out of eight since October and on weekends. end since February. Barbecues and planchas represent 70% of their activity.

Made in France product

“For the past five years, there has been a planchas phenomenon that has been pulling the sector, indicates the leader. It is its cooking system with an effect of caramelization of the cooking juice, without contact with a flame, and which makes it possible to cook meat, fish and vegetables that appeals. “

To make a difference in the face of giants like Weber or Camping Gaz, and Chinese competition, Le Marquier highlights its made in France know-how. All its products are certified Origine France Garantie. Since January, the house has even offered a lifetime warranty on its enamelled cast iron plates and stainless steel burners. Manufacturing is more than 90% locally integrated (enamel, steel), only stainless steel comes from Germany and Italy. As a result, the SME did not have any difficulties in sourcing raw materials.

For design, the SME has established partnerships with big names in France. In 2018, it called on the Peugeot Design Lab studio. A work that gave birth in 2020 to the Allure planchas. To conquer women, in search of “healthy” food, but also young customers, Le Marquier has decided to enter the field of his Asian rivals. Private labels and unbranded devices represent 23% of sales by value, according to GfK. The SME will launch this year planchas at affordable prices to get out of its high-end niche (with models between 400 to 1,500 euros).

Partner of the American leader Traeger

“We are targeting in particular the clientele of first-time buyers and young people in urban areas, with a gas or electric model at 299 euros, Régis Flusin announces. We want to move the lines with this product, on which we have not made any compromise on quality, and expand our market. “ In fact, 75% of purchase intentions relate to an electric plancha in built-up areas, to be installed, for example, on a balcony.

To optimize costs, the manufacturer has developed with a partner, a mold capable of making two enamel plates instead of one. A technical challenge that allows it to lower its prices. Since 2019, Le Marquier has also been the distributor in France of the American brand Traeger, a success story in the United States. The company has just overtaken its rival Weber in the United States, thanks to the use of wood pellets. A revolution in the barbecue market.