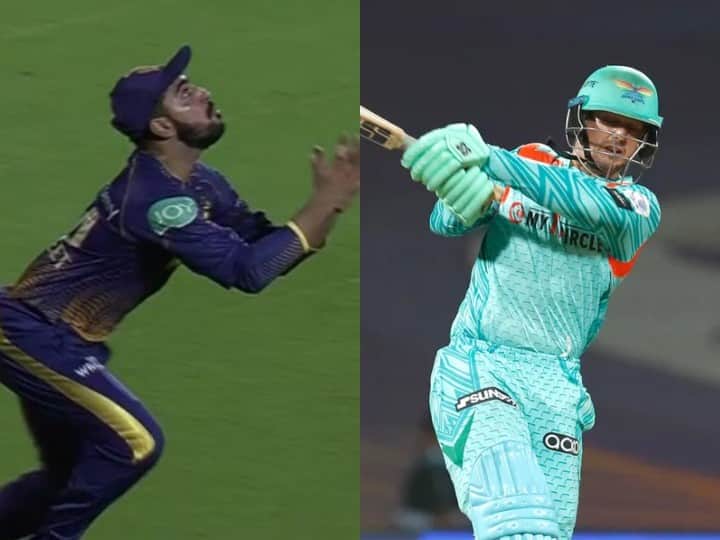 Quinton De Kock Abhijit Tomar KKR vs LSG IPL 2022: There is a saying about cricket, ‘Catch win match’. This saying fits perfectly on the match played between Kolkata Knight Riders and Lucknow Super Giants. In this match, leaving a catch to Kolkata became so heavy that he paid the price by losing the match. During the innings of Lucknow in a match of IPL 2022, Abhijit Tomar dropped the catch of de Kock in the third over of the innings bowled by Umesh Yadav. After this, de Kock played a long innings and helped to increase the team’s score.

The left-handed opener hit an unbeaten 140 off 70 balls and captain KL Rahul’s unbeaten 68 off 51 balls helped Lucknow Super Giants score 210 runs in 20 overs without losing a wicket. De Kock registered the third highest score in IPL after Chris Gayle (175 not out off 66 balls) and Brendon McCullum (158 not out off 73 balls).

After receiving the Player of the Match award, de Kock said, “I liked that I scored an unbeaten century. Also sad that this century should have been scored at the beginning, which was done before the end of the IPL. When I came out to bat, I resolved to play a long innings, which came true. In the third over, I got a life. Also the team’s score was very low till the 12th over, but the way I and Rahul managed the score. Has been carried forward, it has been beneficial for the team.”

Meanwhile, there was another catch, which completely turned the match in favor of Lucknow at the crucial juncture. Chasing a huge target, KKR needed 21 runs for the last over with Rinku Singh and Sunil Narine at the crease. In the first three balls, Rinku hit Marcus Stoinis for four on the first ball and six on the second, third ball, which took the score to the need of five runs in three balls. After this, Singh took 2 runs while hitting the ball, but Rinku lost his wicket on the fifth ball, which changed the course of the match. Singh handed the catch to Avon Lewis. Lewis took a brilliant catch, in which he caught the ball with one hand, which was a brilliant catch of the IPL.

Also read: IPL 2022: When Rinku Singh was injured, his father did not eat food for 2-3 days, know after how many struggles he got a place in the team

Rinku Singh Profile: Know who is Rinku Singh, who scored 40 runs in 15 balls, played a heart-wrenching innings against Lucknow