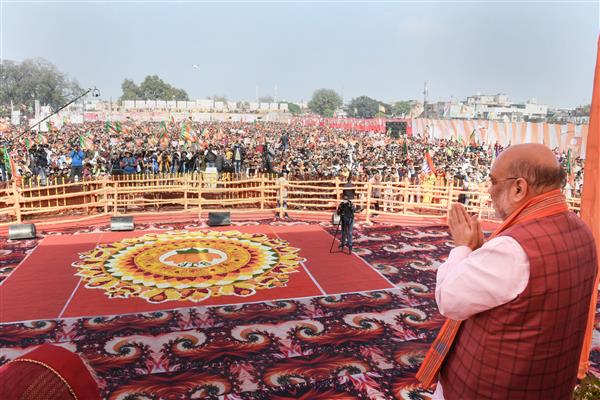 A massive political war has erupted in poll-bound Uttar Pradesh in the backdrop of IT raids on Samajwadi Party leader Pushpraj Jain in Kannauj.

While the Samajwadi Party is accusing the ruling BJP of “missing central agencies”, the saffron party leaders are using the development to take swipes at Akhilesh Yadav.

Home Minister Amit Shah, who was in Ayodhya to “take stock of the ongoing work at the Ram Temple”, took pot shots and targeted Akhilesh Yadav at his rally later.

“Can ‘bua-babua’ (Mayawati and Akhilesh Yadav) take UP forward? During their rule they stashed black money. Today the ‘durgandh’ (bad smell) of Samajwadi Party ‘ittra’ (perfume) is spreading. Today when raids are going on, they (SP) are getting worried,” Shah said addressing the public rally in Ayodhya.

He also asked people whether the enforcement agencies should not conduct raids on corrupt people who have black money.

“Do you have any problem or issues that people with black money are being raided,” Shah asked people at the rally, where he also targeted the Congress and other rivals in the poll-bound UP.

The Samajwadi Party, which is completely backing Pushpraj Jain, is claiming that now the BJP has gone after the “real target” after “mistakenly raiding Piyush Jain, their own man”.

The Income Tax Department today raided multiple premises linked to perfume traders and some others in Uttar Pradesh as part of a tax evasion investigation, including in Kannauj.

The Samajwadi Party tweeted from its official handle that the premises of its MLC Pushpraj alias Pampi Jain in Kannauj had been raided.

It claimed that the raids were launched by the “BJP government” after Yadav announced in the media conference there and dubbed the action as an “open misuse of central agencies by a scared BJP”.