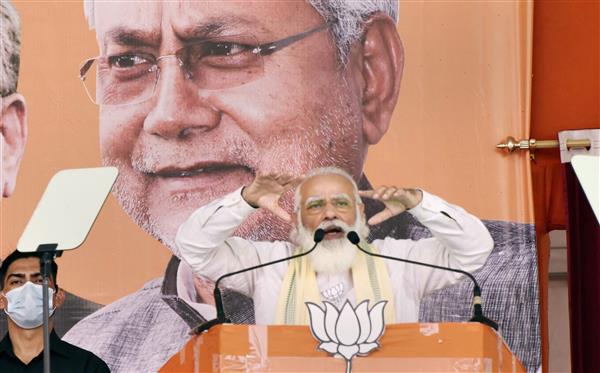 Launching a scathing attack against Opposition RJD and Congress, Prime Minister Narendra Modi on Friday said those who were trying to bring back Article 370 in Jammu and Kashmir are asking for votes from people in Bihar who send their sons and daughters to the front to protect the country.

“They can do whatever, India will not retreat from its stated position,” he said in his first election rally in poll-bound Bihar.

The PM also slammed those “supporting middlemen and dalaals openly” in Punjab.

“MSP ka to bahana hai, sachai ye hai ke inhone bicholiyon aur dalaloon ko bachana hai (MSP is an excuse, the fact is they want to protect middlemen). They don’t care about nation but middlemen …. whenever there are attempts to remove the middlemen, they get upset, “he said also referring to the Congress onslaught against the center on the Rafale jet deal.

Speaking several times in local dialect, the Prime Minister also remembered the Bihar soldiers who were martyred in the Galwan valley clash.

Praising Nitish Kumar for the work in Bihar, the Prime Minister said to keep the state on the path to the development of the people should vote for the NDA.

Modi began by greeting people of Bihar, praising them for fighting the COVID-19 pandemic and paying ‘shradhanjali’ to two top leaders from the state who passed away recently – LJP leader Ram Vilas Paswan and RJD leader Raghuvansh Prasad.

Speaking at Sasaram from a combined NDA platform, the Prime Minister called Bihar the bowl of rice and said the state was celebrating democracy while keeping in mind all precautions. Recounting various steps taken by the center and the state governments for uplift of the poor and the backward in the state, he outlined the plans for generating jobs and also promoting Hindi as a language in technical education like medicine and engineering.

“All surveys analyzing abki baar NDA sarkar. This even as some people are trying to confuse by projecting some faces, ”he said in obvious reference to RJD’s Tejashwi Yadav, who reports claim is drawing lot of traction.

“Bihar is no longer a ‘bimaru’ state and people will reject those who made it one, he said.

The Prime Minister also spoke about the improved law and order situation in the state.

“Bihar has got the power of double engine and it is progressing,” Modi said, recounting the pro-poor measures by the center during the pandemic.

Speaking about the long-pending schemes in Bihar, he said the NDA was completing the projects.

“We fulfilled the promises made by the Opposition which used Bihar only to fill their coffers. He wasted 10 years of Nitish Kumar and you are all aware what they did in the state, ”he said slamming Lalu Prasad-led RJD, without naming it.