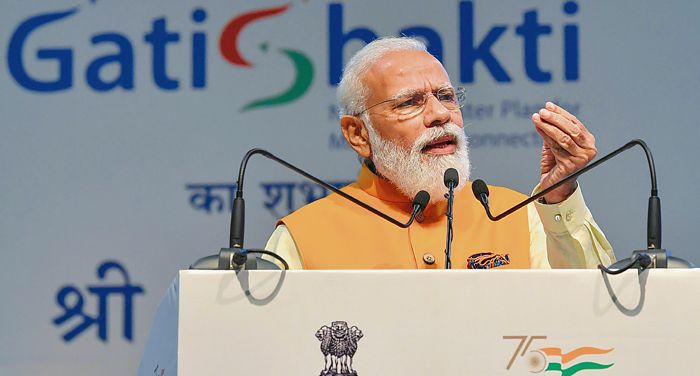 Noting that taxpayers’ money was wasted in the past by way of delayed projects and lack of inter-departmental coordination, the PM said the government was now nurturing a work culture of completing projects “in time and ahead of time by bringing departments together”.

“Over the years, the signage — work in progress — became a symbol of distrust in the government. Today 21st century India is leaving behind old practices. The Gati Shakti Plan will give impetus to 21st century India and remove obstacles from its path,” the PM said.

He said the subject of infrastructure was not even visible in political party manifestos.

Citing a study showing logistics cost in India at 13 per cent of the GDP, the PM said the plan would reduce these costs and lay the foundation for a self-reliant India over the next 25 years. He said people, industry, manufacturers and farmers were at the heart of the plan, which would bring government departments on one platform, enhancing efficiency.

“Gaps between macro planning and micro implementation, lack of coordination between departments and advance information to the industry, an approach of working in silos were all hampering infrastructure development and leading to budget wastage. Such an approach dissipated energies instead of harnessing them. The new plan will change this and lead to optimum utilization of resources,” the PM said.