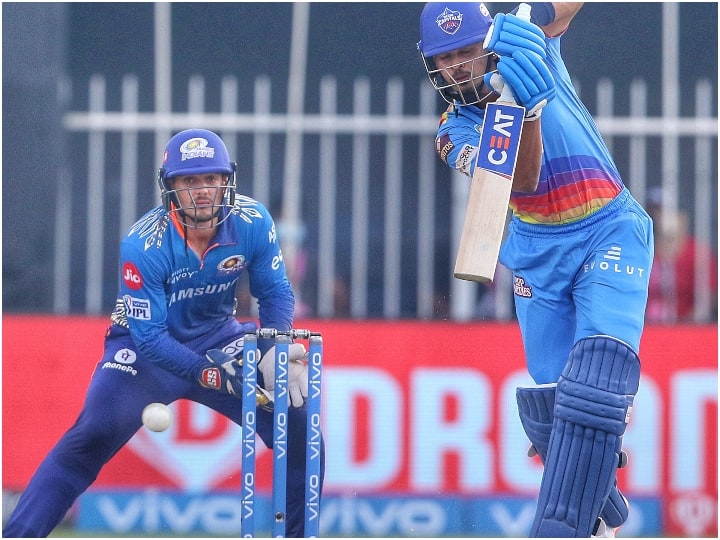 Mumbai vs Delhi: Rishabh Pant-led Delhi Capitals defeated Mumbai Indians by four wickets in the 46th match of IPL 2021 played in Sharjah. Playing first, Mumbai had scored 129 runs for eight wickets in 20 overs. In response, at one point Delhi lost their six wickets for 93 runs, but after that Shreyas Iyer and R Ashwin played with restraint and gave their team victory in the last over. With this defeat, the path of Mumbai to reach the playoffs has become very difficult.

This is Mumbai’s fifth defeat in 12 matches. He is currently at number six in the points table with 10 points. Although the fourth and fifth places Kolkata Knight Riders and Punjab Kings also have 10-10 points, but their net run rate is better than Mumbai. Mumbai will now have to rely on the results of Kolkata and Punjab to reach the playoffs. Also, you have to win both your remaining matches.

Chasing the simple target of 130 runs from Mumbai, the start of Delhi was not good. He had lost the wickets of Shikhar Dhawan, Steve Smith and Prithvi Shaw in the first five overs itself. After this, captain Rishabh Pant attacked the bowlers of Mumbai. But he too got out in an attempt to hit a six. He scored 26 runs in 22 balls with the help of three fours and one six. After this, Akshar Patel 09 and Shimron Hetmyer 15 were also dismissed cheaply. But Iyer held one end and did not let his team come under pressure.

Iyer scored 33 not out off 33 balls. He hit two fours in this innings. Apart from this, Ashwin also played an important innings of 20 not out in 21 balls with the help of a six. Both of them shared an unbeaten 39 runs for the seventh wicket. Ashwin won the match for his team by hitting a six.

Losing the toss and opting to bat first, Mumbai Indians did not have a good start. In the second over, captain Rohit Sharma returned to the pavilion after scoring seven runs. He was dismissed by Avesh Khan. After this Quinton de Kock and Suryakumar Yadav shared a 31-run partnership for the second wicket. But dekock got out in the affair of playing a big shot on the ball of Axar Patel. He scored 19 runs in 18 balls with the help of a four and a six.

After this, Suryakumar Yadav, who was seen in great rhythm, also became a victim of Axar Patel. He was dismissed for 33 runs in 26 balls with the help of two fours and two sixes. After this the team of Mumbai scattered like a pack of cards. After Surya’s dismissal, Saurabh Tiwary got out after scoring 15 and Kieran Pollard scored 06.

Half the pavilion was returned for 87 runs. After this it was the responsibility of the Pandya brothers to take the score forward. But Hardik could not live up to the expectations and got out after scoring just 17 runs in 18 balls with the help of two fours. Soon after, Coulter Knight returned to the pavilion for one run. However, in the final moments, Jayant Yadav made 11 off four balls and Mumbai’s team could score 129 runs due to a six by Krunal Pandya on the last ball of the innings. Krunal Pandya returned unbeaten on 13 off 15 balls. He hit a four and a six.