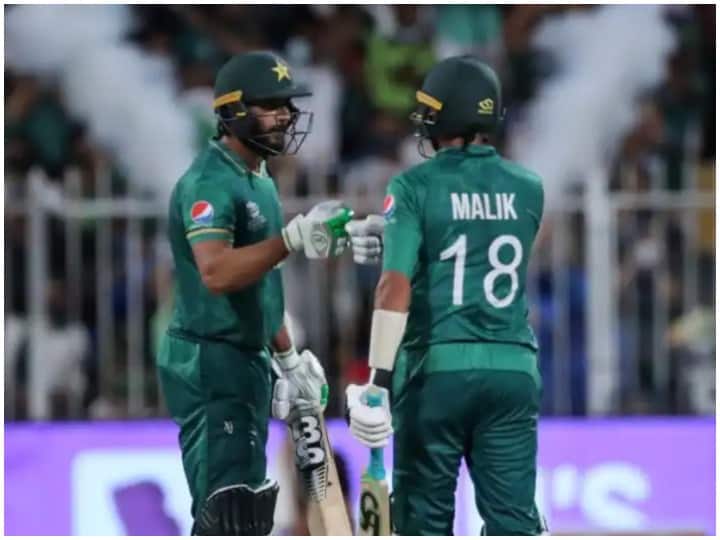 Pakistan vs New Zealand Highlights: Thanks to the career-best bowling of fast bowler Haris Rauf, Pakistan won the ICC T20 World Cup.ICC T20 World Cup) They beat New Zealand by five wickets on Tuesday to register their second consecutive win in the Group Two match of the Super 12 stage. Chasing New Zealand’s target of 135, Pakistan won by scoring 135 for five with eight balls to spare. Openers Mohammad Rizwan (33), veteran Shoaib Malik (26 not out in 20 balls) and Asif Ali (27 not out off 12 balls) played a key role in taking the team to the target.

Malik and Asif shared an unbroken 48-run partnership in 3.5 overs in extreme conditions. Asif hit one four and three sixes in his innings while Malik hit two fours and a six. In front of the stormy bowling of Rauf (4 for 22), New Zealand’s team could only score 134 runs for eight wickets. Spinners Imad Wasim (1 for 24) and Mohammad Hafeez (1 for 16) and pacer Shaheen Shah Afridi (1 for 21) also supported Rauf.

At the same time, New Zealand lost wickets at regular intervals and none of its batsmen could play. Openers Daryl Mitchell and Devon Conway were the team’s top scorers with 27 runs each while captain Kane Williamson contributed 25 runs. At the same time, Pakistan’s start was slow. The team scored 30 runs in the power play and lost the wicket of captain Babar Azam (09) who was bowled by Tim Southee.

Rizwan, who scored an unbeaten half-century in the first match against India, was once again in good spirits. Apart from hitting two fours on Trent Boult (one wicket for 29 runs), he also saw the ball of Southee (one wicket for 25 runs) for the boundary. However, Fakhar Zaman (11) was having trouble batting. He tried to ease the pressure with a six on Ish Sodhi (two for 28) but was caught leg-spinner off the same leg-spinner. Hafeez (11) took the team’s score past 50 runs in the 10th over with a six off James Neesham in the very first ball, but in the next over of left-arm spinner Mitchell Santner (1 for 33), Conway took his brilliant catch. .

Pakistan batsmen had to struggle to hit boundaries

After this, Sodhi made Rizwan leg before Pakistan’s score of 69 for four. In the middle overs, Pakistan’s batsmen had to struggle to hit boundaries. Although Imad Wasim (11) hit Boult for a four but got leg before the next ball. Pakistan needed 44 runs to win in the last five overs. The veteran Malik was standing at one end. Asif Ali bridged the gap between run and ball with two consecutive sixes off Southee. In the 18th over, Malik scored 15 runs including a four on Santner and then turned the match in Pakistan’s favor. The team needed nine runs in the last two overs, Asif gave Boult a six and then won the team with two runs.

Earlier, Pakistan decided to bowl first, after which Martin Guptill (17) and Mitchell (27), opening the innings for the first time in any format, gave New Zealand a cautious start. Guptill hit fours in successive overs off left-handed spinner Imad Wasim. Mitchell welcomes Hasan Ali with a six but Rauf bowls Guptill. New Zealand scored 42 for one wicket in the power play. Mitchell, hitting his second six on Wasim, completed the team’s half-century in the ninth over, but in an attempt to repeat the same shot on the next ball, he was caught by Fakhar Zaman at long on. He hit two sixes and a four while facing 20 balls.

In the next over, Hafeez caught James Neesham (01) at the hands of Fakhar to reduce New Zealand’s score to 56 for three. Amidst the dominance of Pakistani bowlers in the middle overs, Williamson tried to increase the runs by hitting fours and sixes in successive deliveries of Hafeez. Devon Conway also hit leg-spinner Shadab Khan for three consecutive fours. New Zealand suffered a major setback in the next over when Williamson was run out. He hit two fours and a six in his 26-ball innings. New Zealand’s 100 runs were completed in the 15th over. Rauf returned to the bowling, sending Conway (27) and Glenn Phillips (13) to the pavilion within three balls to break New Zealand’s hopes of reaching the big score. Conway faced 24 balls and hit three fours.

Shaheen got Tim Seifert (08) caught by Hafeez while Rauf got the fourth wicket by bowling Mitchell Santner (06) in the last over. New Zealand’s team could only add 44 runs in the last seven overs. New Zealand suffered a pre-match setback when in-form fast bowler Lockie Ferguson was ruled out of the tournament with a ‘grade II’ injury to his right calf.

Mohammad Rizwan on Shami: The voice raised in Pakistan in support of Shami, opener Rizwan stopped speaking to the trollers