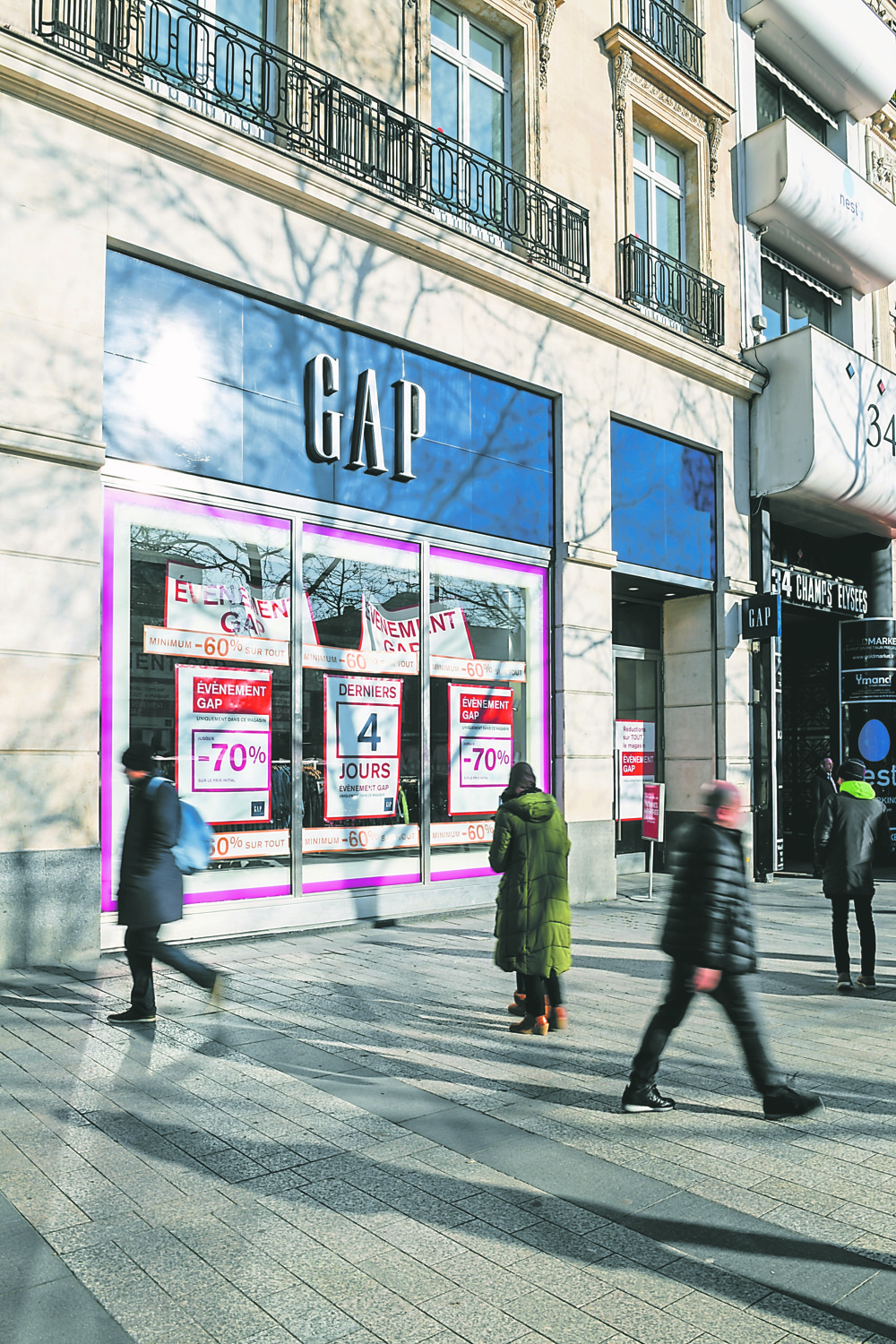 “They weren’t all dying, but all were hit. “ As in Jean de La Fontaine’s “The sick animals of the plague”, the French ready-to-wear brands have fallen one after the other since the spring confinement. Legal redress for Camaïeu, La Halle, André, Un Jour Ailleurs; safeguard procedure for Celio and Orchestra-Prémaman; finally change of shareholder for Naf Naf. And, for two days, the bad news has been linked: the 500 employees of Gap France have learned of the possible closure of 21 stores of the American brand by July 2021. While those of Kidiliz, leader in children’s fashion (Absorba, Catimini, Z, etc.) – 1,600 people in France – now know that, regardless of their buyer, a bleeding awaits them on the social level.

Clothing chains that employed 180,000 people have lost more than 4,000 jobs in France since April, says Clarisse Reille, general manager of Défi La mode de France, the professional committee for the economic development of clothing. Near 650 stores have already definitely lowered the curtain over the period. A massacre.

While luxury and the cheapest brands are doing relatively well, mid-range brands, weakened by their history and the financial logic of their shareholders, have been caught up in their past. In the mid-2000s, these channels attracted financiers. At the time, the latter saw them as ideal targets for successfully carrying out a leveraged buy-out (LBO), an arrangement which made it possible to buy out a company by indebting it then repaying it thanks to its cash flows. The situation is, it is true, favorable, with sales increasing steadily.

Founded in 1984 by four directors of the Mulliez group, the Camaïeu brand was taken over in 2007 by the British fund Cinven, which valued it 1.6 billion euros. For its part, Vivarte – the former André group, which has become a conglomerate of French brands (La Halle, Kookaï, Minelli, etc.) – is the subject of a first LBO. Two more will follow. The heavyweight of clothing, which continues to diversify its portfolio (Naf Naf, Chevignon…), found itself in a few years with a debt close to 3 billion. But, with the financial crisis, the tide is turning. “This is where everything goes wrong”, observes a good connoisseur of the market.

The flagship of Roubaix, Camaïeu, passes into the hands of its creditors from 2016, strangled by a debt of 1 billion. Its sales, which were crumbling over the years, are still down 9% over the 2019-2020 financial year, to 570 million euros. The northern brand cannot withstand the shock of the Covid. On August 17, it was transferred to the Financière immobilière bordelaise (FIB) at the bar of the commercial court. Amount of the transaction: 2 euros, “Barely the price of a metro ticket”, for 511 out of 634 stores. No solution has yet been found for stores abroad….

At Vivarte too, the urgency is declared. Renegotiating debt with creditors is no longer enough. Called to the rescue in the fall of 2016, Patrick Puy, an expert in business turnarounds, is embarking on a cut-sale sale. But the brands of the former fashion giant are losing ground. Naf Naf is sold 52 million – four times less than its acquisition price by Vivarte to Chinese La Chapelle, who dreams of developing the brand in his country. Kookaï is taken over by Magi, its Australian licensee. Finally, André, founded in 1896, came into the fold of the Spartoo shoe site. But to complete the transaction, it is Patrick Puy who must sign a check. Jean-Louis Alfred, CFDT delegate from Vivarte, does not hide his bitterness: “Since 2011, we have seen four CEOs pass, but we no longer had a strategy. “

Financial logic has pushed the fundamentals of commerce into the background. The results being less and less to go, the piloting concentrated on the repayment of the debt. On the other hand, investments in marketing, customer relations, information systems essential to analyze data and stick to customer expectations have been lacking. ” This has dug the grave of a lot of signs! In fashion, you have to stay connected to the market », Says Marie Dupin, fashion director at Nelly Rodi, a brand strategy consulting agency.

In fact, the real problem with ready-to-wear chains is that of exploitation. “Debt is just one of the evils of these companies. If we withdraw it, they still lose money ”, underlines Stéphane Cohen, co-founder of the Wingate investment bank, adviser to Naf Naf and the Bordeaux real estate company on the takeover of Camaïeu. Beyond the companies under LBO, those which have not modernized in time, like Celio, still in family hands, also experience reverses of fortune.

Excess supply, lack of product uniqueness, aging store base : the former success stories of affordable fashion have failed to maintain their desirability and have fallen behind new competitors: the Irish Primark, unbeatable on price; Zara, even H & M, at the forefront of creation, constantly offering new models to keep up with the trend.

In addition, in a context of slowing consumption, the organization of production and supplies is no longer appropriate.

” The supplies are too long and too expensive », Observes Stéphane Cohen. With the end of multi-fiber agreements in 2005, most of the manufacturing shifted to Asia, India and Bangladesh. To have your products made, you have to reserve production capacities one year in advance. And it costs more, because ” banks no longer lend to the sector “, explains Wingate’s boss. It is therefore necessary to resort to more sophisticated financing, and therefore more expensive.

For their part, retailers always order large volumes in order to obtain the best prices from their suppliers. Even if it means ending up with too large stocks and therefore difficult to sell. Hence the prices sold off to the detriment of their margin … An economic disaster aggravated by the race for square meters launched by many chains which hoped to amortize their fixed costs (head office, collection, etc.). But, for a decade, this strategy has not been profitable. “The traffic collapsed when the price of leases in the city center was soaring”, says an observer. And today, there is “Too many shops, too many square meters”. Even if the brands have started to rationalize their network.

In fact, the explosion of e-commerce has changed the situation. In ten years, the weight of the Internet in clothing sales has jumped from 3% to 15%, accelerating the decline of physical stores, including “Activity fell by 35% over the period”, calculates Frank Rosenthal, expert in trade marketing. Alas, the chains have underestimated the importance of digital. Thus, at Camaïeu for example, the website generates barely 7% of revenues. “More than sales, what is at stake is the use of data to understand your customer and have targeted exchanges with him ”, underlines Clarisse Reille, who regrets that ready-to-wear brands are not eligible for the digital transformation fund provided for by the government’s post-Covid recovery plan.

The strategy of winning back is only possible for those who have strong backs. ” It takes millions of euros to save a brand and transform its model “, considers Marie Dupin.

Spartoo and the La Chapelle group, respective buyers of André and Naf Naf, threw in the towel barely two years after their arrival. “The shoemaker knowing how to fit” – which lost 10 million euros in 2019 for revenues of 100 million – was sold in July to Francois Feijoo, its CEO from 2005 to 2013, who retains 55 out of 188 stores. While Naf Naf fell into the hands of one of its suppliers, the Turkish-born group Sy, based in Bondy, in the Paris region.

All the players are aware that the model, which is running out of steam, must be rethought. “It is the bases of the sector that are affected”, notes Pierre-François Le Louët, president of the French Federation of Women’s Ready-to-Wear.

Shorter production circuits to allow fast restocking and better responsiveness to the expectations of customers: it is Sy’s bet to relaunch the label created in 1973 by the Pariente brothers. “Thanks to its factories in France, Tunisia, Poland and Italy, stocks will be managed on a just-in-time basis. This should lead to cash savings ”, explains Wingate CEO.

The transformation process of mid-range brands is underway, analyzes a study on “New economic models of fashion” carried out at the request of the Challenge. But it will be ” slow and expensive “. Today, moreover, the sector is under no illusions. After a terrible comeback with a market decline of more than 7% in September, he expects the list of failures to grow even further in the coming months.

Decrease of more than 17% in 2020
The Covid-19 pandemic has accelerated these failures. With stores closed for more than two months, clothing sales plunged. In France and internationally. For La Halle, which operated 820 stores in France, on the outskirts of cities in particular, “This resulted in a loss of 30 million euros on turnover and 15 million on the margin”, says Patrick Puy, the earthy CEO of the parent company Vivarte, thus justifying his bankruptcy on April 21, which leaves 2,200 employees out of 5,400… Annus horribilis, the clothing market would fall by at least 17% in 2020, according to the French Fashion Institute (IFM). In fact, the sector has been sinking since the subprime crisis. Between 2007 and 2019, it lost 17% of its value. With an accelerated degradation for three years. “We have entered the era of frugality”, notes Gildas Minvielle, director of the IFM economic observatory.

In fact, customer behavior has changed. Sensitive to purchasing power, the budget dedicated to clothing now faces competition from other items such as mobile phones, leisure activities, etc. Otherwise, buying new makes you dream less. Today, more than 12 million French people say they buy on Vinted, the application for selling clothes between individuals. Hit hard by the movement of “yellow vests”, then by strikes linked to the pension reform between December 2019 and February 2020, ready-to-wear companies have approached the health crisis with very weak cash flows.