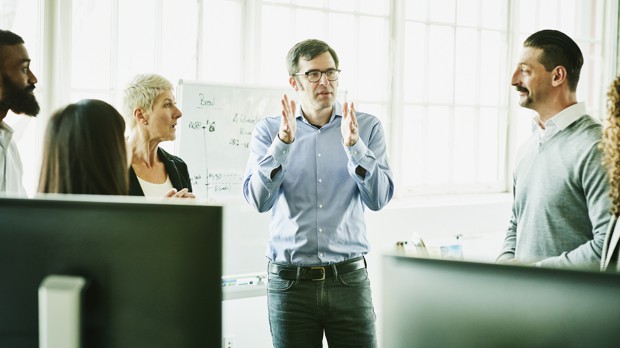 The definition of a raison d’être is an essential strategic decision which comes under an act of strong leadership; also, reflection must necessarily begin with the leaders. For the leader, this is about showing courage and daring, setting an example and daring to challenge established standards. When Emery Jacquillat, president of Camif, decides to close his site on Black Friday, he refuses to support the frenzy of irresponsible consumption.

Secondly, of course, it must extend to all employees, but we insist on this point: if the managers are not sincerely convinced of the importance of the process and they are not ready to rethink their strategy according to what they discover, the search for the raison d’être will only be a series of wishful thinking, without much use.

Go beyond the idea stage

The leaders are little accustomed and prepared for the exercise. If we admit that the raison d’être is the cornerstone of the company’s strategy, it goes without saying that it is up to them to carry out the archeology and projection work that makes it possible to achieve it, or at least to get strongly involved. It is through this commitment to the process that they will be able to gain scope and project over the long term the company for which they are responsible.

The expression then the revelation of the raison d’être constitutes for the leaders an act of sovereignty, with its share of daring and radical choices. It is only by carrying and embodying the management team that the raison d’être can go beyond the idea stage and become a reality infusing the entire organization.

It is therefore up to the leaders to initiate the reflection, to return to the intentions which animated the founders of the company. Indeed, a fundamental intention has always presided over the invention of the company. This is not a trivial act: it is rare that the only intention has been to make a little money. Of course, a company must be profitable: this is the way to guarantee its sustainability. But there is a bigger stake in the service of which this profitability is put.

Sometimes a business gets lost when other shareholders arrive, leaders change, or a misguided heir makes dangerous decisions by forgetting the company’s values. To return to long-term thinking, it is therefore necessary to anchor oneself in the past in order to better think about the future. An approach that mutuals and cooperatives have understood, as have family businesses.

What motivates the heirs of large family businesses? After all, since they are heirs, they could savor their wealth and retire early. But many of them feel more like custodians than owners of their business. They know they have to take it to the next generation, in good shape or, better, grown up. They did not receive a gift as an inheritance, but a responsibility.

A manager, however, told us about her battle with certain family shareholders, who would prefer to reap short-term profits: she fights for the sustainability of the company, and seeks added value in the broad sense of her company. The Pacte law now makes it possible to include the raison d’être in the articles of association, and thus to defend certain strategic decisions more easily.

The singularity of the raison d’être

From our experience, the leader’s motivation to initiate this transformation can come from three different factors.

1. A personal motivation, purely moral, resulting from a desire to do good because of his education, his personal convictions, a transformative element in his life: awareness, birth of children, etc.

2. A desire to leave a positive mark on the world. This lever may seem egocentric, but it is very powerful.

3. A wish to perpetuate one’s business, to ensure that it survives in the long term, beyond short-term results. This is the approach of Michel Leclercq at Decathlon, Pierre Bellon at Sodexo, Bouygues, and other family-owned companies.

To define their uniqueness, then their raison d’être, the company’s managers must take the time to think about it, and talk about it together. This approach is built during workshops and seminars, fueled by research on the foundations of the company. Once you have some key ideas, it’s time to expand them into increasingly larger concentric circles within the company.

Jean-Noël Felli is a teacher at Essec, founder of Republic Alley, one of the first Parisian incubators in 2001. He is the co-founder and director of Balthazar, a strategy consulting group. Patrick Lenain is an economist at the OECD, associate professor at the University of Paris-est. This text is taken from their book “The truly responsible company. The raison d’être: a lever for innovation and performance ”published by Vuibert editions, 224 pages, 24 euros.