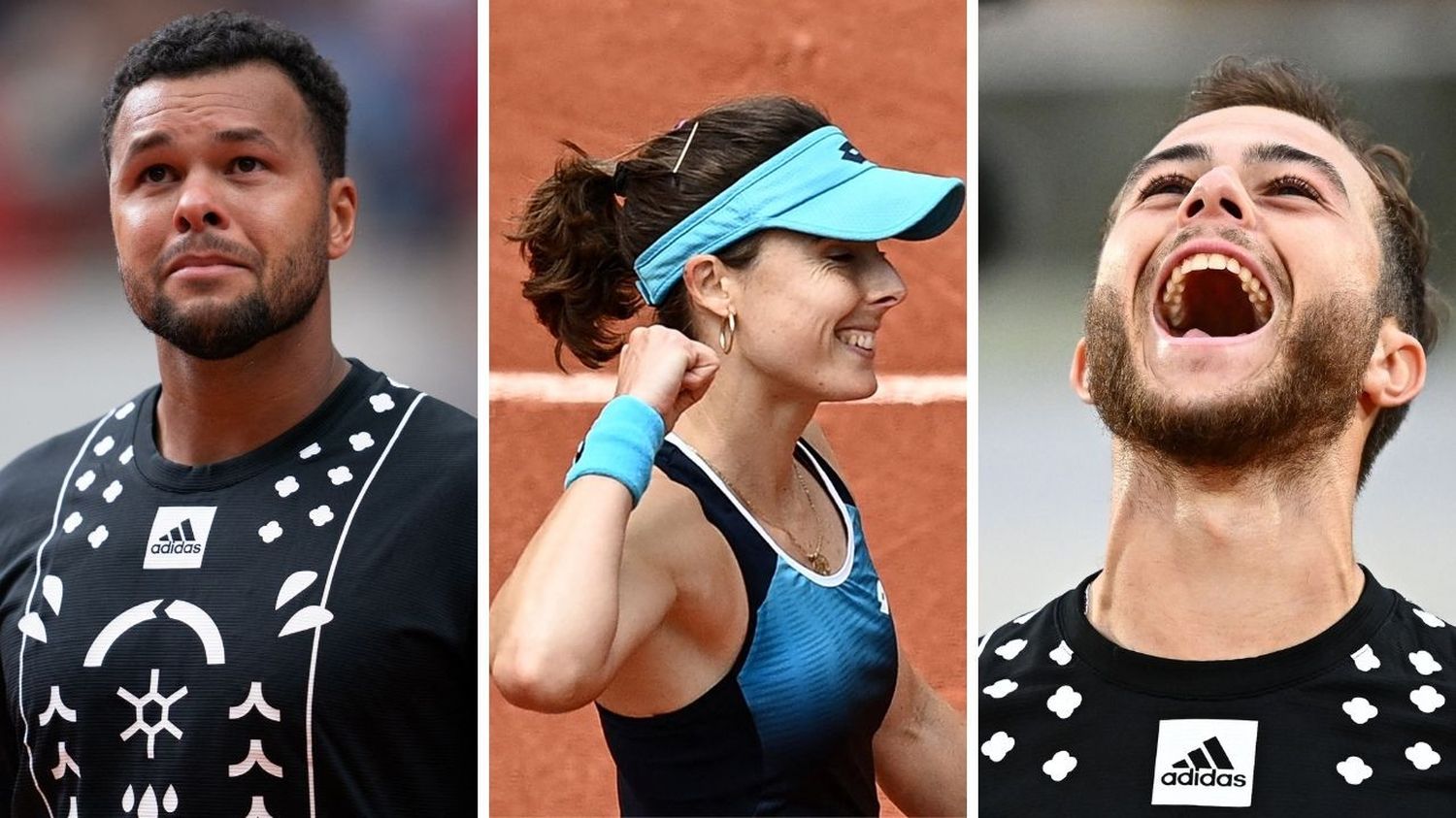 No less than 15 French people were expected on the courts of Roland-Garros, Tuesday, May 24, for the end of the first round. Lhe tears of Jo-Wilfried Tsonga marked the day. The Frenchman, former world number 5, played the last match of his career, coming close to the feat against Casper Ruud, in front of an audience won over to his cause.

On the other hand, what a magnificent outcome for Gilles Simon! At 37, while participating in his last Roland-Garros, the veteran from Nice offered himself a magnificent feat during the night session. Hugo Gaston and Richard Gasquet also smile after their victory. Five Tricolores will be in total in the second round of Roland-Garros in the men’s draw.

Among the women, Alizée Cornet and Caroline Garcia joined Diane Parry, Léolia Jeanjean and Elsa Jacquemot in the second round. There had not been so many French women at this stage of the tournament since 2017.

One last big fight and then it’s gone. Opposed to Casper Ruud for his last career game, Jo-Wilfried Tsonga had a spectacular final outing (6-7 [6-8]7-6 [7-4]6-2, 7-6 [7-0]). The Chatrier court, at first three-quarters empty, gradually filled up and gave voice to the last lap of the former world number 5.

The French and the 8th player in the world were equal in the first two sets, completed in the tie-break, chaining high-level exchanges. If in the third set, the youth of the Norwegian took over the veteran tricolor, the latter almost won the fourth before being betrayed by a painful right shoulder.

Tsonga gave himself a memorable last dance. What to leave by the great door of Auteuil, after a moving ceremony, where the whole world tennis, players, coaches and the general public hailed “Jo’s” career.

At 37 and for his last Roland-Garros, Gilles Simon emerged victorious, at one o’clock in the morning, from his first round match against the Spaniard Pablo Carreno Busta (6-4, 6-4, 4-6, 1 -6, 6-4), after 3h54 of a spectacular fight. In a football stadium atmosphere created by a few hundred brave supporters who braved the cold and the night, the Frenchman managed to get out of one of those extended matches of which he has the secret, he who announced that he would end his career at the end of the year.

After winning the first two sets, Simon let himself be carried away in a fifth set by the 18th in the world. He then looked like he had to let go after the quick loss of his face-off, but he hung on, as usual. Led 3-4, carried by a crazy public, he lined up three games in a row, to win and give himself the right to face the American Steve Johnson (92nd) in the second round. He may have dropped to 157th in the world, “Gillou” remains this incredible player, who does not give up in all circumstances.

Hugo Gaston is back! Eighth runner-up in 2020, the Frenchman once again ignited the Parisian public by beating Australian Alex de Minaur in the first round 4-6, 6-2, 6-3, 0-6, 7-6 [10-4]. The 74th player in the world first made the seeded number 19 doubt, before cracking him in the fifth round. He will face in the second round the Argentinian Pedro Cachin, 153rd in the world.

Interrupted the day before by the rain, Richard Gasquet (70th in the world) remained on his good dynamics. Leading 6-1, 5-2 Monday night, the Habs ended their demonstration on Tuesday (6-1, 6-3, 6-4) against South African Lloyd Harris, 39th in the world. Defeated by Rafael Nadal in the second round in 2021, Richard Gasquet will this time be opposed to Sebastian Korda (seed number 27).

Pair and Rinderknech drink the cup

Benoit Paire and Arthur Rinderknech also played the rest of their match after Monday’s interruption. SOn the Simonne-Mathieu court, the Belarusian Ilya Ivashka showered the hopes of Benoît Paire (6-3, 7-5, 1-6, 7-5). The Frenchman, who was chasing the score after losing the first set on Monday, hoped to pick up the score under the encouragement of the public. By wasting three fourth-inning balls, and with 24 double faults, the Habs scuttled themselves. Enough to feed regrets for the Habs, who announced in the process to take a long break for “cure your demons”.

There will be five French women in the second round, a first since 2017. After the qualifications for the second round of Diane Parry, Léolia Jeanjean and Elsa Jacquemot, Alizé Cornet and Caroline Garcia won their ticket on Tuesday.

It took two sets and 1h19 for the Lyonnaise to get rid of the American Taylor Townsend (6-3, 6-4). Quickly broken, Caroline Garcia immediately took over the service of her opponent, 342nd in the world, before taking control of the match. The Frenchwoman will face Madison Keys, seeded number 22, in the second round.

On the Philippe-Chatrier court, Alizé Cornet also made a successful entry. The French only lost two games (6-2, 6-0) against the Japanese Misaki Doi, 98th in the WTA. Never in danger, the 32-year-old Niçoise will face Jelena Ostapenko (13th in the standings), winner of the tournament in 2017, in the next round.

Andrianjafitrimo and Paquet come up against the elite

No feat, however, for Tessah Andrianjafitrimo, Chloé Paquet and Fiona Ferro. With a particularly strong draw, the three French women inherited players from the top 10.

Tessah Andrianjafitrimo however rocked Karolina Pliskova (8th in the world) by winning the first set. But the 23-year-old Frenchwoman, 141st in the world and invited by the organizers, quickly found herself in difficulty under the lightning forehands of the former world number. In the end, she lost logically (2-6, 6-3, 6-1).

Like her compatriot, Chloé Paquet did well against Aryna Sabalenka, 7th in the WTA rankings. She even won the first round with disconcerting ease, before believing in the feat for a time and finally becoming disillusioned against the powerful Belarusian (2-6, 6-3, 6-4).

Fiona Ferro, meanwhile, failed to exist against World No. 3 Paula Badosa. Swept in two sets 6-2, 6-0, the Spaniard sent the 130th in the world back home in less than an hour.

HAS Roland-Garros, Ugo Humbert’s record is not famous. The 23-year-old left-hander chained Tuesday a fourth defeat in a row in the first round of the Parisian Grand Slam. The Messin, yet Daniil Medvedev’s scorer at the ATP Cup, and 46th in the ATP rankings, lost in five sets (6-2, 2-6, 6-7 [4-7]6-4, 6-2), against the Finnish Emil Ruusuvuori (61st).

For his part, Adrian Mannarino was defeated (6-1, 7-6 [7-1], 6-2) in two hours by the Argentinian Federico Delbonis (65th ATP). Not a big fan of ocher, the 33-year-old Tricolor very rarely weighed on his break points and in key moments.

The report is not more brilliant on the side of Benjamin Bonzi. The Toulousain, 52nd player in the world, lost to the American Frances Tiafoe (27th ATP), after three tight sets (7-5, 7-5, 7-6 [7-5]) on the Simonne-Mathieu court, decidedly unfavorable to the French on Tuesday.