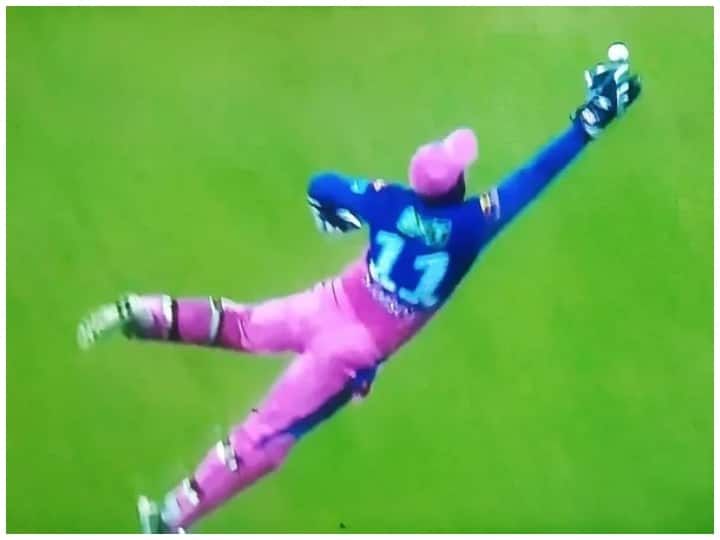 RR vs DC: The seventh match of IPL 2021 is being played between Rajasthan Royals and Delhi Capitals at the Wankhede Stadium in Mumbai. Delhi scored 147 runs for eight wickets in 20 overs despite a very poor start in this match. In this match, Rajasthan captain and wicketkeeper Sanju Samson caught the brilliant catch of Delhi opener Shikhar Dhawan behind the wicket. It is being called the best catch of this season. & Nbsp;

In fact, in the fourth over of Delhi’s innings, Dhawan played backwards on Unadkat’s ball, but the ball was not in the middle of his bat. felt. Samson leaped like Superman in the air behind the wicket and caught his Shaandaq catch. The video of Samson’s catch is becoming increasingly viral on social media. & Nbsp;

For Delhi, captain Rishabh Pant played an explosive innings of 51 runs in 32 balls. During this time, 9 fours came off his bat. At the same time Tom Curran scored 21 and Chris Woakes scored 15 not out. At the same time, Jaidev Unadkat bowled amazingly for Rajasthan. He took three wickets for just 15 runs in his four overs. & Nbsp;

However, Delhi had a very poor start. He lost his three wickets for 36 runs in the power play itself. After this, Marcus Stoinis also returned to the pavilion without opening an account. Captain Rishabh Pant continued to play attacking cricket despite falling four wickets for 37 runs. He scored 20 runs in the 11th over against Rahul Tewatia. Pant was dismissed for 51 runs in 32 balls with 9 fours. He was run out by Ryan Parag. & Nbsp;