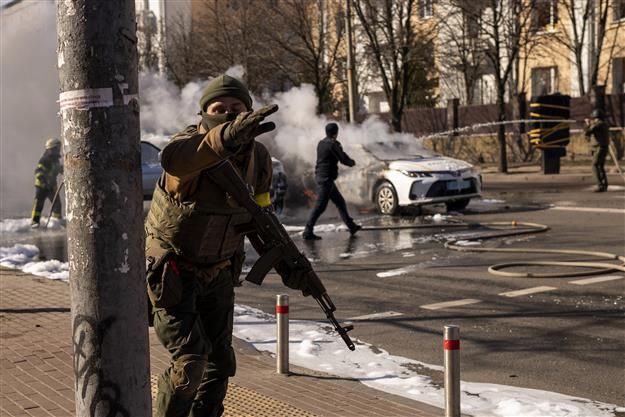 Russian troops stormed toward Ukraine’s capital early Saturday, and street fighting broke out as city officials urged residents to take shelter. The country’s President refused an American offer to evacuate, insisting that he would stay. “The fight is here,” he said.

The clashes followed two days of fighting that resulted in hundreds of casualties and pummeled bridges, schools and apartment buildings. US officials believe Russian President Vladimir Putin is determined to overthrow Ukraine’s government and replace it with a regime of his own.

The assault represented Putin’s boldest effort yet to redraw the world map and revive Moscow’s Cold War-era influence. It triggered new international efforts to end the invasion, including direct sanctions on Putin.

As his country confronted explosions and gunfire, and as the fate of Kyiv hung in the balance, Ukraine President Volodymyr Zelenskyy appealed for a cease-fire and warned in a bleak statement that multiple cities were under attack. “This night we have to stand firm,” he said. An official quoted the President as saying that “the fight is here” and that he needed anti-tank ammunition but “not a ride.”

The Kremlin accepted Kyiv’s offer to hold talks, but it appeared to be an effort to squeeze concessions out of the embattled Zelenskyy instead of a gesture toward a diplomatic solution. The Russian military continued its advance, laying claim Friday to the southern Ukraine city of Melitopol. Still, it was unclear in the fog of war how much of Ukraine is still under Ukrainian control and how much or little Russian forces have seized.

Ukraine’s military reported shooting down an II-76 Russian transport plane carrying paratroopers near Vasylkiv, an account confirmed by a senior American intelligence official. It was unclear how many were on board. A second Russian military transport plane was shot down near Bila Tserkva, said US officials. — AP