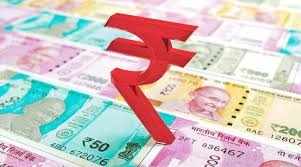 New Delhi. The rupee suffered a major setback in the Indian currency market today. On Tuesday, the rupee closed with a weakness of 32 paise against the dollar. Due to the strength of the dollar, the rupee closed at Rs 73.42 per dollar today after trading for the day.

The main reason for this strong weakness of the rupee is believed to be the weakness in the domestic stock market, increased demand for the dollar and the strengthening of the dollar against 6 other major foreign international currencies. Experts believe that this strength in the value of the dollar today gave a big blow to the rupee and today the rupee recorded a tremendous fall of 32 paise per dollar.

In the inter-bank foreign exchange market, the rupee today started trading with a weakness of two paise from yesterday’s closing level. The rupee had opened at a level of Rs 73.12 per dollar in today’s trade. The rupee gained marginally in the opening minutes and the rupee touched a level of Rs 73.09. But after that the rupee continued to depreciate due to increased demand for the dollar and strengthening of the dollar against other major foreign currencies.

Also read this news: Why is the bed decorated with flowers on the day of honeymoon?

The dollar’s position in the currency market today strengthened against the other 6 major international currencies. Due to which the dollar index gained 0.22 percent to reach the level of 92.23.