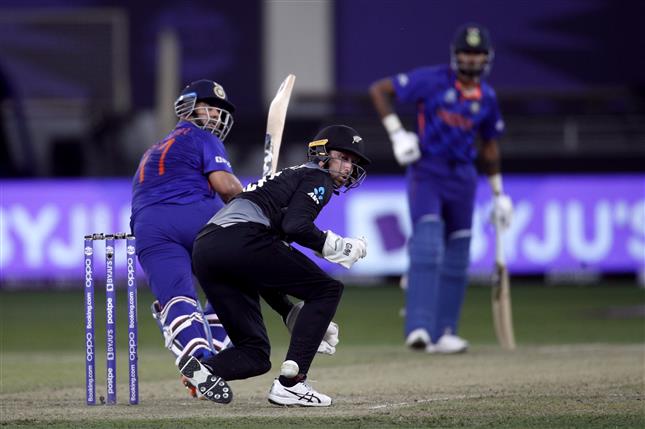 India made 110 runs for the loss of 7 wickets after they were put into bat by New Zealand in an all-important Super 12 ICC T20 World Cup match here on Sunday.

India kept losing wickets at regular intervals as skipper Virat Kohli was dismissed for 9 runs off 17 balls, opener Ishan Kishan for four runs in the third over, KL Rahul for 18 runs and Rohit Sharma on 14

Rishabh Pant got bowled out on 12 runs off 19 balls by Adam Milne. Hardik Pandya made 23 off 24 balls before being dismissed by Trent Boult. Shardul Thakur got out for a duck as Boult got another wicket.

Kishan got out off a Trent Boult delivery trying to clear the fielder at fine leg but was caught by Daryl Mitchell.

KL Rahul made 18 off 16 balls before being dismissed by Tim Southee.

Rohit Sharma made 14 runs off 14 balls before being dismissed by Ish Sodhi.

Virat Kohli got out on 9 runs off 17 balls as Ish Sodhi got the crucial wicket.

India made two changes to their playing XI with Ishan Kishan coming in place of Suryakumar Yadav, who is suffering from back spasms while out-of-form Bhuvneshwar Kumar made way for all-rounder Shardul Thakur.