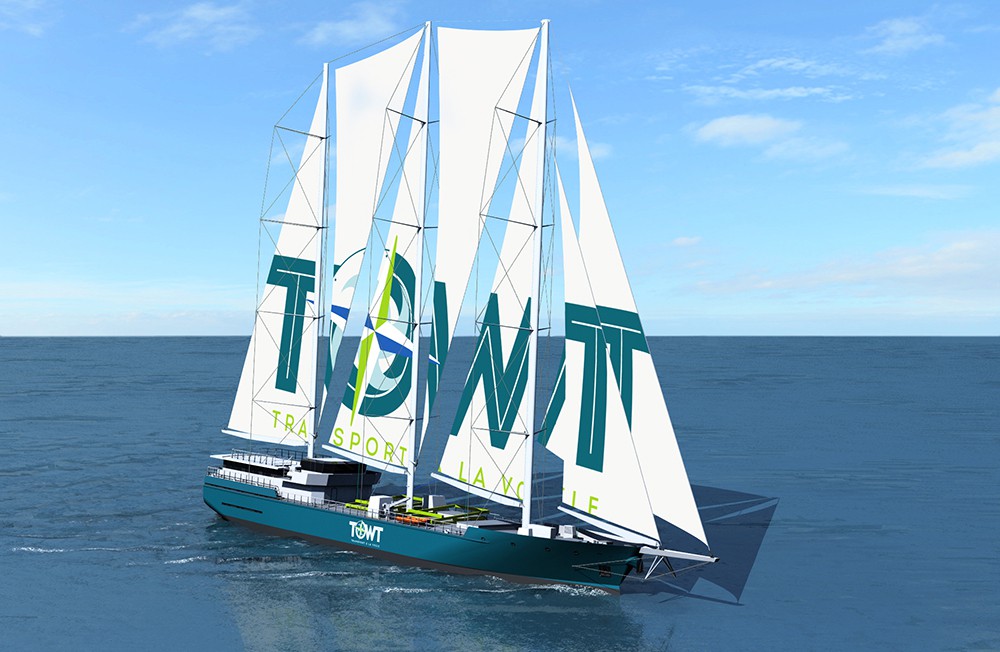 Located in the port of Le Havre a few steps from the CMA CGM building, the premises of Towt hardly reflect, for the moment, its activity. It’s hard to imagine that on this rainy winter afternoon, an old sailing rig chartered by this young shipping company is crossing the Atlantic Ocean towards Marie-Galante, off Guadeloupe. , the holds loaded with Bordeaux wine. It is true that its founder Guillaume Le Grand and his team have just set up their HQ in this international port. A move from Douarnenez in anticipation of a radical change in the life of the company: the construction of its first boat. With its 1,000 tonnes of freight available, this new 70 m freighter will have a capacity almost 30 times greater than that of the schooners and other bricks chartered until then.

However, there is no question of giving up what makes the raison d’être of the company: the use of sails as the main propulsion mode. Because for this 38-year-old Brestois, what counts above all is to start decarbonize freight transport. This Sciences Po Lyon graduate, married to a Colombian co-founder of the company, is not the only one to bet on the development of this new sector of clean maritime transport. Two other young companies are on the bridge.

Ariadne’s floors in the hold

Created by Michel Pery, ex-captain of the merchant marine who also commanded the three-master “Belem”, and Jean Zanuttini, an officer who sailed under his orders, Néoline is also on the verge of launching the construction ofa sailboat almost twice the size (136 m long) of Towt’s – it will emit 90% less carbon than conventional freighters.

Founded by four thirty-year-olds, including two from the Ecole Nationale Supérieure Maritime, the third thief, the company Zephyr & Boreas, is even more advanced. He has just started work on the fixed-sail boat that will transport the various stages of the Ariane rocket between the European construction sites and Kourou.

LIVE THE WIND
Accused of polluting the planet, large freight transport ships are also eyeing sail propulsion systems. Maersk equipped its “Pelikan” tanker in 2018 with two Flettner rotors which save nearly 10% of fuel thanks to their wind-driven cylinders. For their part, Chantiers de l’Atlantique is testing a 100% composite folding sail propulsion system, called Solid Sail. Designed for passenger ships, it could be adapted to freighters.
>> More unexpected, two French start-ups, Beyond the Sea and Airseas, have been working for several years on an auxiliary propulsion device consisting of a very large kite sail automatically sent into the air when weather conditions permit. If successful, this solution could save up to 20% of fuel.

All these young shipowners did not take the same options. A pioneer, Guillaume Le Grand wanted to get involved from the start in the action, starting by chartering old rigs. To prime the pump, he took the risk of becoming a wine, rum, beer, tea, honey or coffee trader. Towt has made around fifty crossings, including seven transatlantic, on eighteen old rigs. “ Even if shippers quickly trusted us, we knew from the start that it was not by making circles in the water with our boats from another era that we were going to change the face of maritime transport. », Explains Guillaume Le Grand. To limit the financial risk, he chooses a modest-sized vessel whose cost does not exceed 12 million euros.

Launched in 2015, Néoline aimed larger with a boat propelled by 4,200 m2 sails, with a budget of around 50 million euros. Even if it means opening up its capital to the Nantes shipowner Sogestran. “ For’avoid competition from container ships and their unbeatable prices, we partly designed it for non-standard freight », Emphasizes Jean Zanuttini.

The case of Zéphyr & Borée, founded in 2017, is still different. To win the call for tenders launched by Ariane Espace in 2018, the company has created a joint venture with the Jifmar Offshore Services group and joined forces with the designer of the four fixed sails that will equip the future 121-meter freighter, the naval architect Marc Van Peteghem. Thanks to the service contract with the European rocket manufacturer, which guarantees most of the operation, financing the boat was less problematic. This was not the case for the other two companies.

“ Letters of intent from shippers are not enough to convince bankers , testifies Jean Zanuttini, they want formal contracts. “For Néoline, things were unblocked last year. After Renault in 2018, the company succeeded in obtaining firm commitments manufacturers Manitou and Bénéteau, the spirits manufacturer Hennessy and a few weeks ago the equipment manufacturer Michelin. To them five, these customers already provide almost all of the filling on a road that goes from Saint-Nazaire to Baltimore passing through Saint-Pierre-et-Miquelon.

Towt has managed to embark around fifteen loaders, including the chocolatier Cémoi, the coffee importer Belco, the rum and champagne producers Longueteau and Drappier. Already largely full, the future freighter will provide round trips between Le Havre and New York, Abidjan, Pointe-à-Pitre and Brazil.

How were these customers convinced? To compensate for the possible absence of wind, these sailing freighters will also have diesel and electric engines which allow them to sail at more than 14 knots and guarantee punctuality, whatever the weather conditions. ” In the end, even reducing the speed to 11 knots, which allows us to use at 90% the propulsion velique, door-to-door transport time is almost equivalent to that of a conventional transporter », Explains Augustin Merle, logistics manager at Manitou.

With these new ships, prices have also become more competitive. “ The price is a bit higher but it is guaranteed, while with conventional cargo ships, it can vary from one to two depending on market conditions », Observes a Manitou executive.

Above all, there is the satisfaction of participating in the decarbonisation of maritime transport. ” Although the use of Towt’s sail freighter requires us to review all of our logistics to consolidate shipments into one load, we are very eager to embark on the adventure. », Indicates Alexandre Bellangé, CEO of Belco.

It therefore remains to start the construction of the boats. Having entered into exclusive negotiations with a French shipyard, Towt hopes to start work at the start of the summer. Three “sister ships” are planned from 2023.

In search of the right site

For Néoline it is a little more complicated. After the defection of the Nazairian consortium Néopolia, for lack of a subsidy of 4 million requested from the French State, the company is looking for a new site. Time is running out because she has committed to its customers for a launch no later than mid-2023.

The fact remains that after years of gestation, this sector now seems ready to cast off. The climate emergency opens up a maritime boulevard for it. According to Jean Zanuttini, “ no less than 11% of global freight could switch to velic-powered vessels without any problem “.