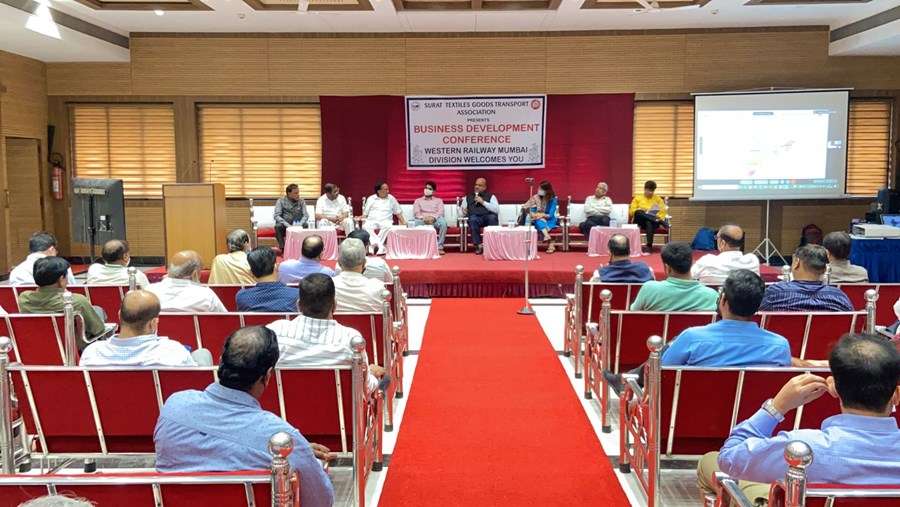 face. Western Railway Mumbai Division has got a big order for the first time from Surat for one-time loading of cloth from traders for Bengal on the upcoming Durga Puja festival. For which the Railways has also made a time table and these trains will leave for Sangrel in Bengal. On Friday, DRM GVL Satyakumar of Mumbai Division held a big meeting with Surat Textile Goods Transport Association at Agrasen Bhawan in which the traders directly put their point before the railways and the railways heard and resolved all their problems, after which for the first time the railways An order for 10 textile special trains was also received simultaneously from Surat.

Also read this news: Unique Tradition: Not only the living but the dead are also married here

We benefit from railways on Durga Puja
Yuvraj Desale, President of Surat Textile Goods Transport Association, who attended this meeting, told Bhaskar that earlier we used to get big orders from Bengal on Durga Puja and mostly used to send the cloth by trucks. Whereas mail used to load in the SLR coaches installed in express trains but it was expensive whereas it used to take four to five days to reach the goods through road but now the railways has planned to run textile trains under this new scheme. Happening. Because railways has removed flexible charge, due to which we will now save 15 to 20 thousand in railways as against seven to eight thousand for road transport. Also, there will be certainty in reaching the goods, that is, the goods will reach the destination in only two days.

Also read this news: High court advocate presented a petition in Hanuman temple, demanding that the BJP government at the center be ousted from power

Textile train will run these days
Dinesh Verma, Director of Surat Railway Station informed that we are going to run 10 textile parcel trains for Sangrel in Bengal by 22nd October in which each train will be of 25 -25 coaches. Each coach will have 238 -238 tonnes of clothes loading. All these trains will leave from Chalthan. Railway will earn 9 to 10 lakhs from one textile train. In this we will leave these textile trains on 22nd September, 24th, 29th, 1st October, 6th, 8th, 20th and 22nd October. Whereas we have left one train for Sangrel on 17th September and another one left on 15th September. Apart from this, we have got booking of 10 more trains for Bengal only, whose date will be fixed.