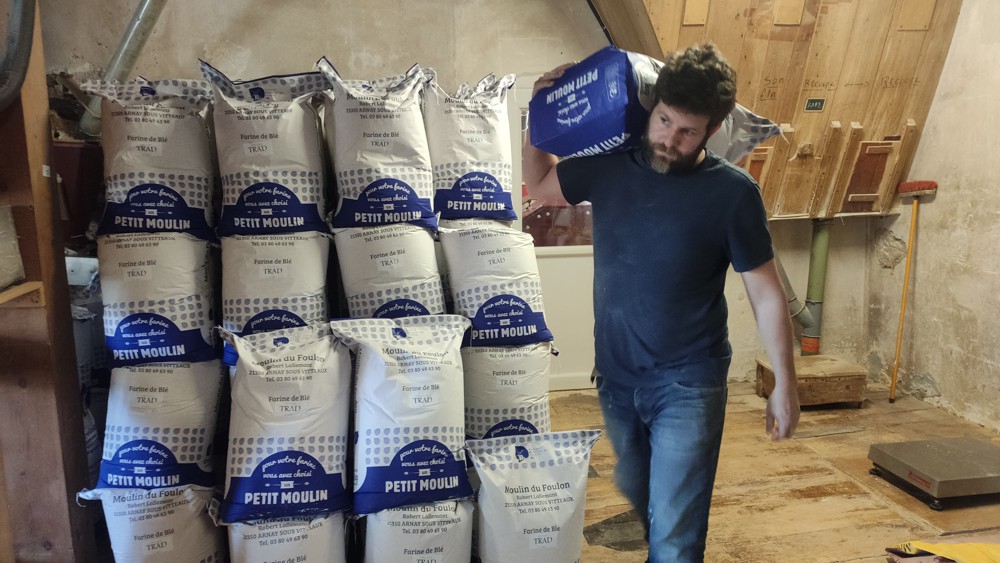 The signature of the sale, on May 18, formalizes the passing of the torch between Robert Lallemant, a 78-year-old miller, and the duo formed by Aurelien Pitaval and Olivier Anayat, two Parisians in their thirties who have been friends since their studies at the Ecole du son (ISTS) ten years ago. If the Moulin du Foulon, in Arnay-sous-Vitteaux, a village of a hundred inhabitants in Auxois, in Côte-d’Or, changes hands, the recipe remains the same: quality flour made with soft wheat, harvested within a radius of 30 kilometers, and sold within a radius of 50 kilometers. Part of the sale is always self-service: the consumer helps himself and deposits the money in the letterbox of the mill.

Third of its capacity

This confidence and the charm of the old mill seduced Aurélien Pitaval when, new owner in the town, he came to buy his flour here. During the first confinement in the spring of 2020, he had seen the miller, then 76 years old, carrying his 25 kg and 40 kg bags alone and had offered to help him. Robert Lallemant had accepted and the Parisian sound engineer had returned every day. “ With confinement, he had multiplied his sales by three and was alone in charge of purchasing, manufacturing, bagging, management…”, testifies Aurélien Pitaval.

When the miller offered to take over the mill, the Parisian began by refusing, before finally talking about it to those around him. “ For several years, I wanted to change my life. I asked to see his accounts and I saw a ‘+’ at the end, I thought that was not bad. I also saw that the mill was running at a third of its capacity,” explains the manager.

The sound engineer finally agrees to take over the business if Robert Lallemant trains him in the trade. He embarks on the adventure Olivier Anayat, his friend of ten years. Both then follow, alternately, a Professional Qualification Certificate (CQP) at the Alqual training center in Saint-Quentin, in the Aisne. “It was there that we discovered that Robert’s flour mill, run empirically, was perfectly in the nails. The training also opened us up to issues of traceability, quality or safety,” appreciates the neo-rural.

The two new millers do not want to revolutionize the mill, but are counting on 600 tonnes of flour produced within two years, against 400 until 2020 and 500 in 2021. Their turnover should reach 240,000 euros this year, 280,000 euros for their second exercise. If sales follow, they could soon hire an employee. Their flour is now sold in seven local supermarkets. In their boxes, a rye flour soon and, later, an organic flour.