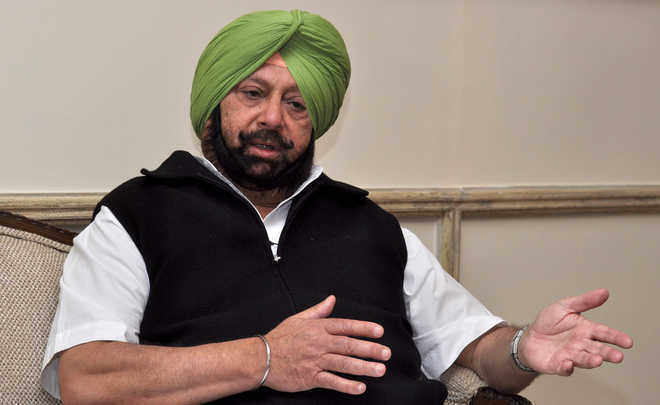 Rejecting the Union Budget for 2021-22 As reflective of the BJP-led central government’s total apathy towards the common man, the middle class and the farmers, Punjab Chief Minister Captain Amarinder Singh on Monday said even the vital sector of defense had not been adequately addressed despite the growing border threat from China and Pakistan, while health allocation was actually down amid the Covid crisis.

Trashing the center’s claim that the health sector allotment had been increased by 35 per cent, the Chief Minister said the fact was that numbers had been effectively fudged to project a hike by including the Rs 35,000 crore Covid vaccine allotment and the amount set aside for sanitation and cleanliness under the health head.

Actually, the budget for health is down 10 per cent, said Amarinder Singh.

The Chief Minister also slammed the center for the step-motherly treatment meted out to Punjab and other northern states in the budget, which was designed to cater to the poll-bound state of West Bengal, as well as south India, with a massive infrastructure development allocation for these regions.

“The Budget also manifests the Central Government’s persistent efforts to sideline non-BJP states like ours, as well as its anti-federal mindset,” said the Chief Minister, pointing to the gap between the fiscal deficit targets fixed for the Union and States for short and medium term.

Aimed at promoting the interests of a few corporates at the cost of the needs and aspirations of the remaining 1.3 plus billion population, the budget presented in Parliament on Monday by the Union Government failed to address the growing problem of unemployment, which the Covid pandemic had exacerbated, he said.

“And did the Finance Minister not find it necessary to even mention constitutional guarantee for MSP, one of the key demands of the farmers battling cold and lathis at the doorstep of New Delhi for over two months now?” Amarinder asked, lamenting the measly 2 per cent increase for the agriculture sector, which had been the only well performing sector for the country amid the lockdown.

The Punjab Chief Minister also flayed the center’s minimal focus on education, which has seen a massive setback for lakhs of children hit by the digital divide amid the pandemic.

“It seems that this government has no care or concern for our soldiers fighting to protect us at the borders, or our frontline healthcare workers and also the teachers who have been pushed to the limits to ensure seamless service in the midst of Covid,” he said.

With no tax relief, the beleaguered middle class has also got nothing in this budget, the CM pointed out, adding that as against 25 per cent for the corporate sector, the middle class will continue to pay 35 per cent plus cess, along with 100 per cent indirect tax on petrol and diesel.

The Chief Minister expressed shock over the center’s decision to go in for a virtual wholesale divestment of the PSUs and government assets at a time when the economy was in the dumps.

This was inexplicable, considering that the RSS had always vehemently opposed such divestment, and also given the center’s self-proclaimed thrust on ‘Atmanirbhar Bharat’, he added.

The entire budget was a big let-down for every section of society, except the big corporates whom the BJP-led central government is out to appease at the cost of the interests of the rest, said the Chief Minister.

The only somewhat positive note was the increase in the revenue grant for deficit states from Rs 75,000 crore to Rs 1,85,000 crore, he said, hoping that the center does not get out of giving Punjab its substantial share on this count.