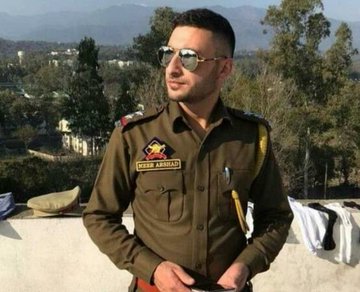 In solidarity, all senior cops have changed the display picture of their twitter handle to that of a picture of police officer Arshid Ahmad Mir, who was shot dead by a terrorist in broad daylight in Srinagar.

Thousands of people had gathered for the last rites of martyred police officer at his home in Jammu and Kashmir’s Kupwara on Sunday evening. Soon after which, #WeAreAllArshid, started trending.

#WATCH | Body of newly recruited Sub-Inspector (Arshid Ahmad Mir), who died in a terror attack in Srinagar, reached his home in Kupwara for his last rites last evening. Jai hind

A wreath-laying ceremony was held at district police lines here in which officials from civil administration, police and other security forces led by the J&K DGP paid floral tributes to the slain officer.

Lieutenant Governor of Jammu and Kashmir Manoj Sinha said his supreme sacrifice will not go in vain and terrorists will be punished.

The police officer was shot dead from point-blank range by a militant in Khanyar locality of the city here on Sunday, evoking strong reactions from various quarters, even as Jammu and Kashmir police chief Dilbag Singh said the perpetrators have been identified and will be brought to justice soon.

Probationary Sub-Inspector Arshid Ahmad, a resident of Kupwara district, was shot at after he was coming back from a hospital where he had taken an accused for a check-up.

The CCTV footage of the incident shows a militant shooting the officer with a pistol at least twice from behind from a point-blank range in Khanyar, leaving him injured.

The sub-inspector was hastened to SKIMS in Soura, but he succumbed to injuries. The incident took place at 1.35 pm.