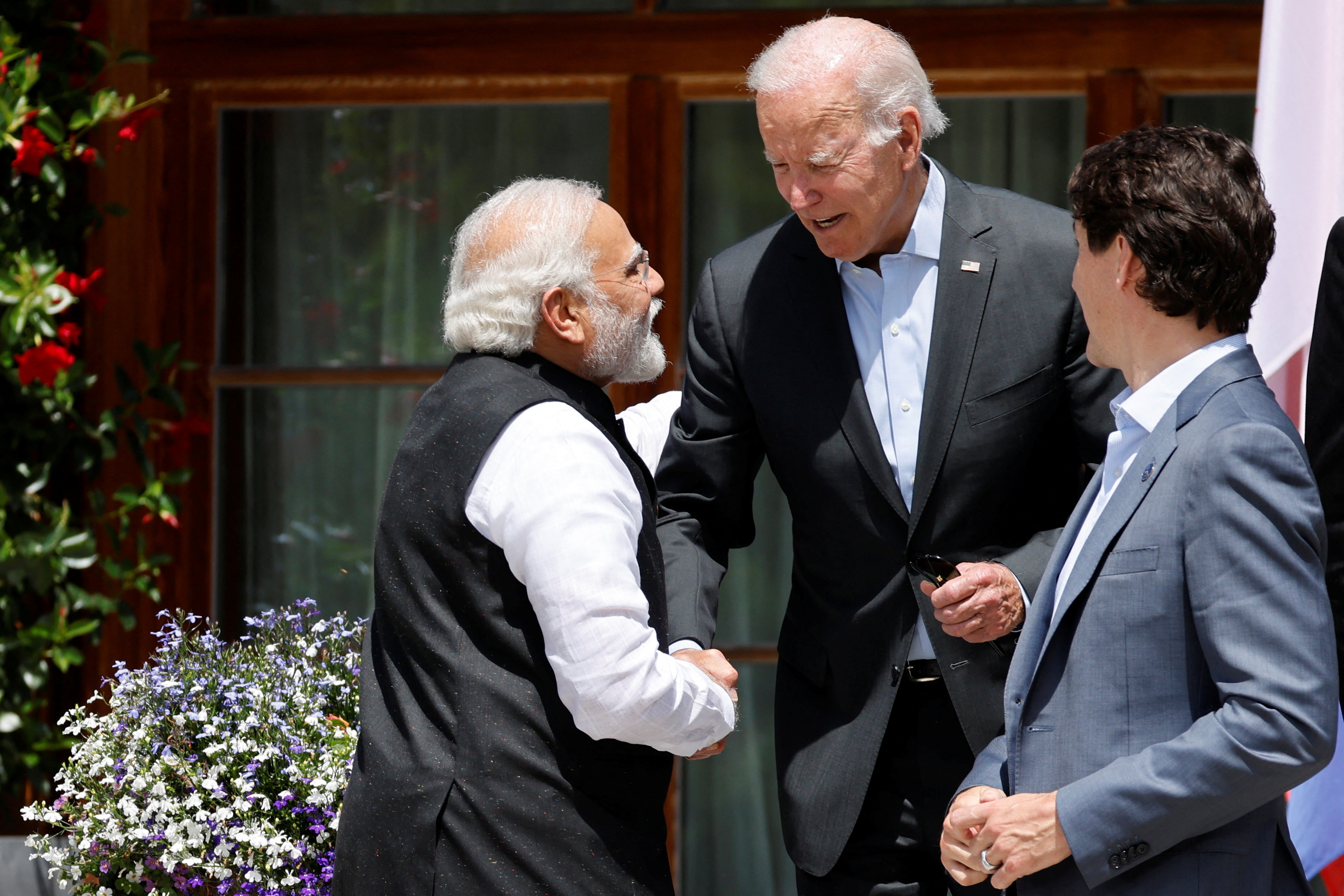 US President Joe Biden’s outreach to the Indian Prime Minister Narendra Modi by stepping out to greet him at the G7 summit in Germany is being perceived as a calculated political move to garner his support on the Quad and other multilateral issues on the table.

TV grabs and pictures of the event have gone viral especially in India and on the internet raising curiosity as to why would Biden do such a thing unless there was an agenda behind it, sources not wishing to be named said.

The US needs India’s support on the Russia Ukraine war where India has maintained a low-profile ambivalent stand in the Quad group with India’s External Affairs Ministry not making any statement that could reportedly upset the balance in the long traditional ties India has had with Russia over the years and with multibillion dollar military supplies at stake, even though the BJP-led NDA has come off to the world as an ultra-right wing party aligned more with the west than the east, analysts feel.

While Biden might persuade India to restrict oil imports from Russia and look at the global demand supply management in several countries, including India where inflation is soaring, India would reiterate its position that it is unfairly being targeted for its imports from Russia on oil while most of the west looks to Russia for energy supplies and imports minerals, fertilizers and ores.

The US understands fully that the Indian diaspora is one of the largest in the ethnic communities settled in the US numbering over one million contributing as much $2 billion in taxes to the IRS and US treasury annually. Highly-educated Indians dominate the IT space in the US, especially Silicon Valley where many Indian Americans lead global companies such as Google, Microsoft, and lots of other mid-level IT companies or startups. It is only rivaled by China which has a language barrier in English which India does not have.

What’s possible on the agenda between the two leaders of the two great democracies of the world if and when they meet. The US might make another futile bid to get Indian support on the Russia Ukraine war, strengthen US in its position on the South China seas to protect its allies, the Philippines and Vietnam, where India too has interests, particularly Vietnam where state owned ONGC is drilling for oil. It could be mutual where India would yield less space given its historic stands on multilateral issues.

The Biden administration has made very clear statements in its election manifesto of supporting the Indian community on several issues considering the diaspora’s contribution to American prosperity. Indian IT companies had a tough time with the Trump administration when it sought to curtail the number of H1B1 visas issued to Indian techies, insisting on giving more space in employing local Americans.

On the average, a low-level or mid-level Indian techie in the IT space would be earning around $50,000 to 70,000 a year. But to employ an American, both American and Indian IT companies would have to pay a minimum wage of $100,000 a year.

That’s the reason why most US and Indian IT companies preferred to outsource or employ equally competent if not more Indians in large numbers with companies such as TCS, Infosys and Wipro and HCL enjoying the benefit of bulk visa issues from US immigration office which Trump sought to strike down.

This could be a major issue that PM Modi could take up with Biden even though the time is very limited for detailed discussions that could well be followed up by the foreign offices on both sides.

Another issue is the pile up of green card applications during the Trump administration which the Biden regime is trying to clear in a sustained manner. This enables dependents and spouses to move to the US to be united with the earning members there. And the huge line up of Indian techies waiting to apply for Green Cards after having served on the H1BI visas for over seven to 10 years.

Why does America treat India as a very trusted ally in all matters?

Look at the Biden’s Democratic manifesto. As Senator, as Chairman of the Senate Foreign Relations Committee, and as Vice President, Joe Biden has supported Indian Americans and a strong friendship between India and the US. “Indian Americans, like all Americans, are deeply invested in the core elements of our future – education, access to high-quality, affordable health care, addressing the climate crisis, and reforming and modernizing our immigration system in a way that aligns with our values,” Biden had stated.

“From fighting Covid-19 to building our economy back better to reforming our system of immigration, a Biden-Harris Administration will be one that Indian Americans can count on,” the manifesto had promised.

Stem the rising tide of hate and bigotry

Ensuring the safety of Indians on American soil is an Indian government priority. Indian Americans of all backgrounds – Hindu, Sikh, Muslim, Jain, and others – have been subjected to bullying and xenophobic attacks. Biden had promised that more than ever, a reassurance that leaders in Washington will have their backs.

Security needs of houses of worship

In 2012, the Sikh community suffered a terrible tragedy when a White supremacist opened fire in an Oak Creek, Wisconsin, gurdwara, ultimately killing seven and wounding four. In January 2019, a Hindu temple was the victim of a horrific act of vandalism and destruction, with windows shattered and xenophobic messages spray-painted across the walls. A murti (idol) was defaced and a knife was stabbed into a chair. Biden understands that mandirs, mosques, gurudwaras, and temples are sacred spaces and that acts of vandalism and destruction gnaw at a community’s sense of belonging and undermine its ability to freely and safely worship. America was built on a foundation of religious freedom. Biden has ensured that places of worship have access to robust and direct security support from the federal government.

Many Indian Americans belong to faith communities that rely on the counsel, support, and wisdom of scholars and religious specialists, who may be foreign nationals traveling to the US on a temporary religious worker (R-1) visa. For many Indian American organisations, the submission and review process for religious worker visas requires substantial administrative and financial resources. Moreover, processing times can result in travel delays, which adversely impact these communities across the country.

The Biden administration has directed the State Department and US Citizenship and Immigration Services (USCIS) to identify methods and programs for streamlining the review of religious worker visas submitted by any faith-based organizations with a reliable track record of faithfully utilizing the religious worker visa program .

Eliminating Language Barriers for the Indian American Community The Biden administration is aware language barriers to vital services and resources can prevent limited English proficient Indian Americans from realizing their potential and the American Dream. Such individuals with limited English proficiency must have access to health care and other government services is one of the aims of the Biden administration.

The Obama-Biden Administration celebrated America’s diversity as an essential strength, including hosting the first White House event to honor the military service of Indian Americans and celebrations of Diwali at the White House. The Biden administration has been changing US Army policy to allow observant Sikhs, as well as Muslim women, to wear religious head coverings while in uniform, so that brave soldiers could both honor their faith and serve their country.

Biden has played a lead role, both as Chairman of the Senate Foreign Relations Committee and as Vice President, in systematically deepening the strategic engagement, people-to-people ties, and collaboration with India on global challenges. In 2006, Biden announced his vision for the future of US-India relations: “My dream is that in 2020, the two closest nations in the world will be India and the United States.” He has also worked to make that vision a reality, including leading the charge in Congress, working with Democrats and Republicans, to approve the US-India Civil Nuclear Agreement in 2008.

The Obama-Biden administration continued to deepen collaboration between India and the US on strategic, defense, economic, regional, and global challenges. Biden was a major champion of growing and expanding the US-India partnership and as President now, stands committed to continue that, say analysts.

As the world’s oldest and largest democracies, the US and India are bound together by shared democratic values: fair and free elections, equality under the law, and the freedom of expression and religion. These core principles have endured throughout each of the nations’ histories and will continue to be the source of strength in the future, the Biden administration feels strongly, which explains why US trusts India as a strong ally and why Biden went out of the way to step out and greet Modi at the G7 summit in Germany.