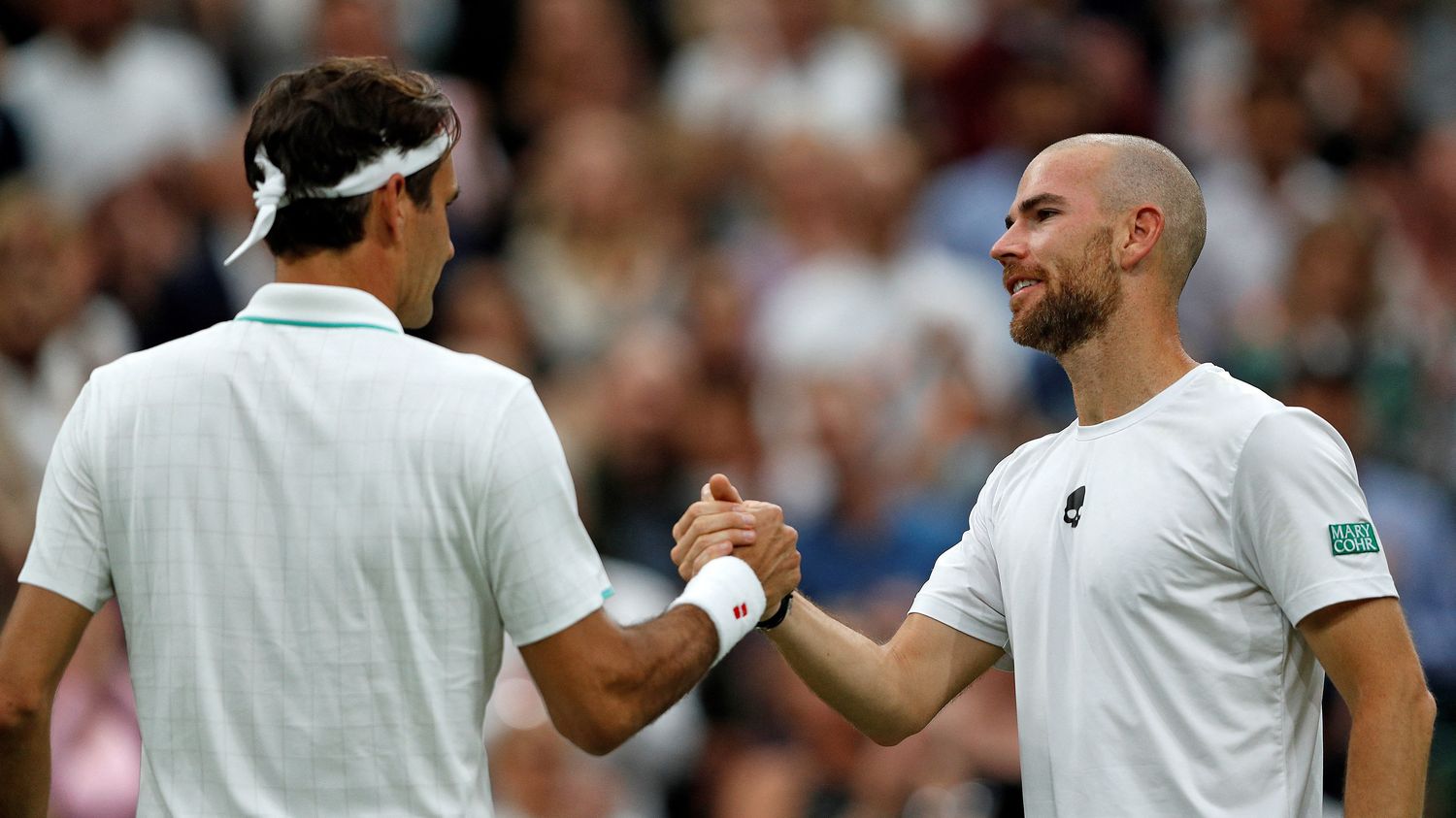 Heavily disturbed by the rain, the second day of Wimbledon was marked by many game interruptions on Tuesday, June 29. On the French side, Adrian Mannarino threatened Roger Federer for a long time, very far from his best level, before injuring himself at the end of the 4th set and having to throw in the towel. Unlike his compatriot, Benoît Paire did not shine, and lost in the first round, for the third time in three Grand Slam tournaments this season.

Federer back in his kingdom

For his return to the place where he built his legend, Federer was opposed to Frenchman Adrian Mannarino on center court. The Swiss, who will celebrate his 40th birthday in August, is still looking for a 21st Grand Slam title, which would allow him to regain the record for Major titles.

After several physical problems, Federer did not hide his desire to experience a ninth coronation at Wimbledon. “I think anything is possible”, he clarified. Taking advantage of the abandonment of his French opponent, hit in the knee, the Swiss went to the second round of the tournament. A long way to go for Roger Federer, who had several scares, and gave up two sets to the French (6-4, 6-7, 3-6, 6-2, ab.). The Swiss will meet Richard Gasquet for his second match, after the Habs victory against Yuichi Sugita (7-6, 4-6, 6-2, 6-1).

Our eight-time champion is back @Roger Federer and @AdrianMannarino head out under the roof of Center Court#Wimbledon pic.twitter.com/FPpxY1SWKM

The series continues for Benoît Paire. Defeated in the first round by Diego Schwartzmann in three sets (6-3, 6-4, 6-0), the Frenchman offered himself a new exit from the track in the first round of a Grand Slam. After the Australian Open and Roland Garros, it was on the grass of Wimbledon that Benoît Paire bowed as soon as he entered the running.

While the meeting between the two players had been interrupted for lack of light Monday evening, at the end of the second set won by the Argentinian, Benoît Paire returned to the court this morning for … 16 minutes. A lack of conviction which earned him a warning for non-combativeness. What moreover did not please the French, “I take a warning for non-combativeness because it is 5-0, 30-0 in the third set and that it’s only been fifteen minutes that we play. I have the right to miss two returns in a row “.

Zverev in the second round without trembling

Alexander Zverev, semi-finalist at Roland Garros, dismissed without trembling the Dutch Tallon Griekspoor (124th and from qualifying), in three sets (6-3, 6-4, 6-1). Direction the second round for the German, who remains on a painful elimination in the first round in 2019, and more recently on an elimination in the semi-final at Roland Garros, against Stefanos Tsitsipas.

Interrupted in his forward march by the rain, Richard Gasquet did not tremble to then shift into high gear against Yuichi Sugita (7-6 [4], 4-6, 6-2, 6-1). In mastery on service with 70% of points gained, the Bitterois also delivered an impeccable score at the net (14/17). Well helped by the 48 unforced errors of his Japanese opponent, he was a little scared in a second round more hooked before unwinding. In the next round, he will meet, at 35, another veteran of the circuit in the person of Roger Federer, eight-time winner at Wimbledon.

Hoang at the end of the suspense

Antoine Hoang (156th) had to fight until the fifth set to break away from Chinese Zhizhen Zhang (4-6, 7-6 [5], 6-7 [5], 6-3, 6-2) after 3:46 a.m. A tense first round match where the Habs recovered from a deficit of two sets to one. Author of 63 winning strokes, he produced his effort in the last two sets with three breaks in his favor. Already back from hell in his third qualifying round, the 25-year-old is making his way to the second round at Wimbledon for the first time.

Herbert lost in fifth against Andujar

Used to extended matches, the Alsatian Pierre-Hugues Herbert was no exception for his first round against the Spaniard Pablo Andujar (7-6 [7], 6-4, 7-6 [7], 5-7, 8-6). A five-hour marathon that will be contested until nightfall on Wimbledon. Struggling with two match points to save on his serve in the fourth set, “P2H” finally cracked in the fifth and final round after having yet broken the first time to avoid the worst. A new stroke of brilliance for Pablo Andujar (70th), in a style other than his resounding victory against Dominic Thiem, already in the first round, this time at Roland Garros.

Another meeting with twists and turns with the French Arthur Rinderknech (109th) who had to give in against the German Oscar Otte in the super tie-break of the fifth set (4-6, 6-3, 6-2, 6-7 (5) , 13-12 (2)) after 3:57 of the match. Already interrupted Monday because of the darkness, the meeting could already have ended the day before when the Habs got a match point at 6-5 in the fifth set. But his opponent, ranked 151st ATP, quickly took the upper hand, 5-0, in the super tie-break of the fifth set to drive the point home and offer a second round against the former world number 1, Andy Murray.

For his part, Gilles Simon (97th) did not go far from turning the tide against Dusan Lajovic (6-3, 7-5, 3-6, 4-6, 6-3) in almost four hours of the match. Led two sets to zero by the Serbian, the 36-year-old Niçois made up again his delay to two races to one before an interruption due to the rain. In the last set, the physical freshness of Dusan Lajovic in the last three games won consecutively sounded the death knell for the hopes of the Habs, already eliminated nine times in a row this season in the first round. Curse…

After his sunny title in Mallorca on Saturday – the first of his turf career – the Russian Daniil Medvedev took his time to take the measure of the German Jan-Lennard Struff under the roof of Center Court (6-4, 6- 1, 4-6, 7-6 [3]) under the roof of court n ° 1. After two mastered first sets, the 25-year-old derailed at 4-3 on his serve. A warning since the German giant then pushed him into the tie-break of the fourth round, however, concluded with his first match point. After the meeting, he said: “I was surprised to win the first two sets so easily, but then he started to show amazing tennis […] Until the last point, it was not over. It was a roller coaster game “, he concluded ironically as usual.

In this expected first round against the ghost and whimsical Australian Nick Kyrgios (60th), Ugo Humbert (25th) had a lot to do to get rid of a trap opponent. Recent winner in Halle, the Habs suffered a complicated start by losing in a first round, where he had yet made the first break. Stung to the quick, the French then proceeded in the following two sets to resume his march forward. Moment chosen by Kyrgios to resurface and push Humbert in the fifth set. Started, however, he could not argue beyond 3-3, because of the local ban on playing after 11 p.m. (midnight, French time).

Several meetings were stopped due to bad weather in Britain including the meetings of Lucas Pouille or Gaël Monfils, who will therefore have to return to the court a third time, Wednesday, against Christopher O’Connell to end his first round. Only the matches which were played on the center court and the court n ° 1 could continue.