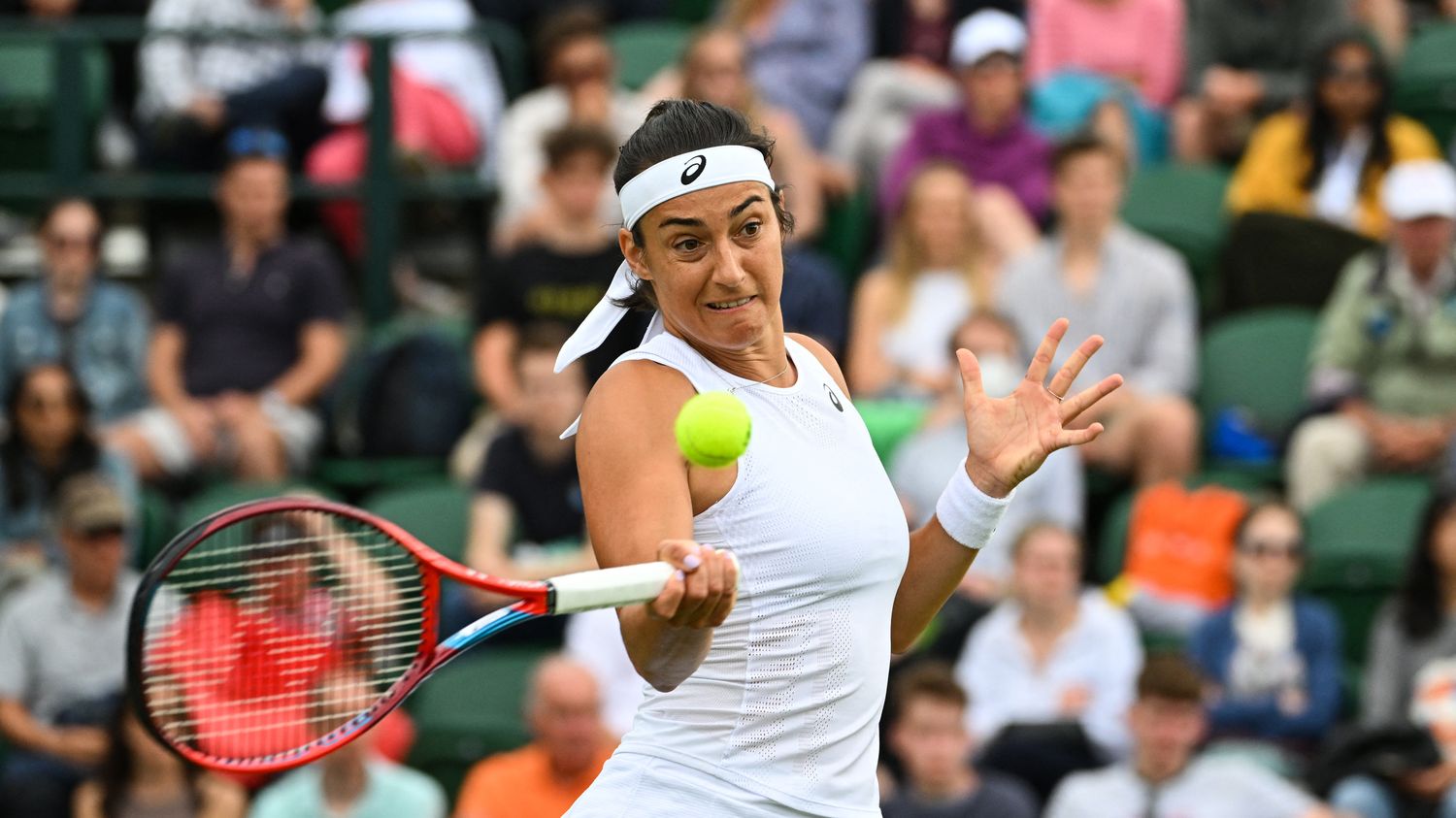 The top seeds met opposite fates in the fifth Wimbledon day. The Tunisian Ons Jabeur, world number 2, left no chance to the Frenchwoman Diane Parry, Friday July 1st. Same easy victory for world number 3 Novak Djokovic, who swept compatriot Miomir Kecmanovic. On the other hand, the London lawn does not succeed in the Greek Maria Sakkari (5th in the WTA ranking), eliminated by Tatjana Maria, only 103rd player in the world.

Solid and decisive at the conclusion. Caroline Garcia, recent winner of the Bad Homburg tournament, continues to shine on the grass. The Frenchwoman dismissed the Chinese Shuai Zhang (7-6, 7-6) in almost two hours of play. Caroline Garcia joined the knockout stages of Wimbledon, a performance she had not achieved since 2017. The Frenchwoman will have a a great deal to play against the Czech Marie Bouzkova, 66th in the world, who had so far never done better than a second round in a Grand Slam.

The task was set to be daunting for Diane Parry (77th WTA) on Center Court. Opposed to the world number 2, Ons Jabeur, the Frenchwoman who was playing her first Wimbledon has paid for his lack of experience. She lost in two sets (6-2, 6-3) in 1h08 of play.

At 19, Diane Parry reached the third round of a Major for the second time in a row, after Roland-Garros. But author of too many unforced errors and irregular on her game balls, the Frenchwoman struggled to exist on Friday. Facing her, the 27-year-old Tunisian played her game without forcing before concluding the match on 14 consecutive points. Ons Jabeur, who has not yet lost a set in the tournament, will find the winner of the match between the Belgian Elise Mertens in the round of 16.

Second Frenchman engaged on Friday, Ugo Humbert resisted but folded against the Belgian David Goffin (4-6, 7-5, 6-2, 7-5), in a match punctuated by air holes on both sides. Ugo Humbert first took the lead before giving in in a tight second set. On his way, the Belgian accelerated in the third before experiencing a stoppage. Led 5-2 in the fourth set, David Goffin was able to take advantage of the errors of the Frenchman, who can harbor regrets. In the next round, David Goffin will face American Frances Tiafoe.

The longer the games go by, the less time the Serb spends on the court. Facing his compatriot Miomir Kecmanovic, Novak Djokovic did not make the suspense last, except at the very end of the match. The world number 3 took place in three sets (6-0, 6-3, 6-4) and 1h52 of play. The alert of the first round, where he had dropped a set to the Korean soon woo Kwon (81st in the world), is a thing of the past.

In the round of 16, Novak Djokovic will find Tim van Rijthoven, who continues to defy the odds as he makes his Grand Slam debut. After winning the ‘s-Hertogenbosch tournament against Daniil Medvedev, where he had received an invitation, the 25-year-old Dutchman dismissed Georgian Nikoloz Basilashvili (6-4, 6-3, 6-4).

Even faster, the Spaniard Carlos Alcaraz swept in 1h38 and three small sets (6-3, 6-1, 6-2) the German Oscar Otte. The world number 7, quarter-finalist at Roland-Garros last May and at the US Open in 2021, will have to erase the Italian Jannik Sinner in the eighth to match this performance at Wimbledon.

Since her semi-final on the London lawn in 2018, Jelena Ostapenko had not passed the third round at Wimbledon, it is now done. If the Latvian needed a set to enter her match, the 17th player in the world finally dismissed in three sets (3-6, 6-1, 6-1) the Romanian Irina-Camelia Begu. Jelena Ostapenko will return for the first time since 2018 to the round of 16 of a Grand Slam tournament, where she will face the surprising German Tatjana Maria.

At 34, the 103rd player in the world got rid of Maria Sakkari (5th in the WTA rankings) in two sets (6-3, 7-5), after being down 5-3 in the second set. Wimbledon obviously does not succeed for the Greek who, in six appearances, has never gone beyond the third round. Tatjana Maria, meanwhile, reached the knockout stages of a Grand Slam tournament for the first time in her career.

A defeat and a record for John Isner

Compiling aces was not enough for John Isner. Facing Jannik Sinner, the 37-year-old American failed to find the keys and lost in three sets (6-4, 7-6, 6-3). Nevertheless, John Isner did not leave this third round empty-handed. With 24 aces on the counter in the match, the American giant (2.08m) overtook the Croatian Ivo Karlovic, another huge player (2.11m), in the number of aces made on the circuit.

With 13,729 aces, @JohnIsner surpasses Ivo Karlovic to claim the top spot in the record books! pic.twitter.com/w0v5rol0Bd