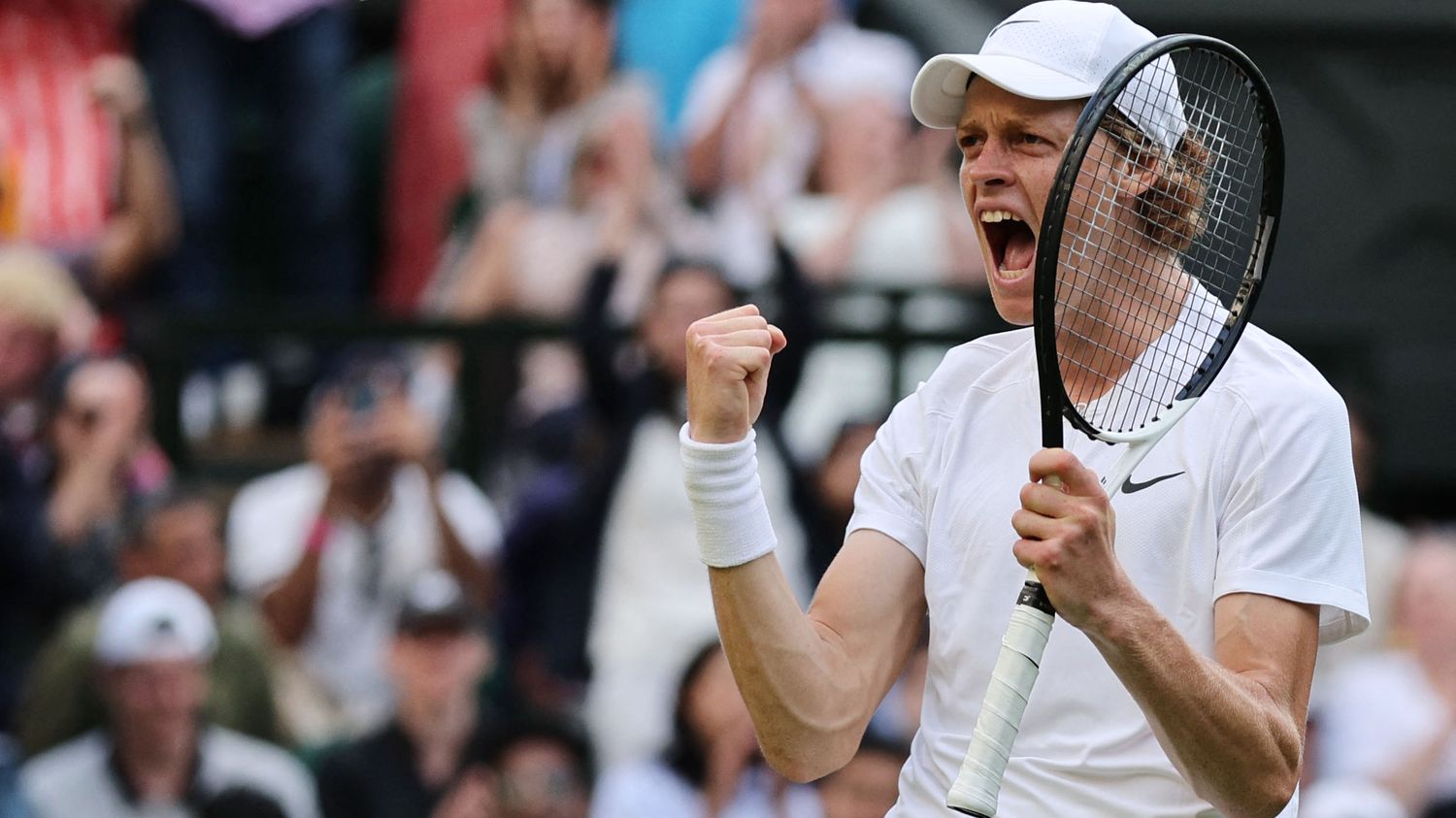 Jannik Sinner won the duel of young prodigies on Sunday July 3 at Wimbledon. The Italian needed four sets to dispose of Carlos Alcaraz. Novak Djokovic also left a set on the way against Dutchman Tim van Rijthoven, but the Serb will be there for the quarter-finals.

In the women’s draw, Ons Jabeur won a match of great intensity against the Belgian Elise Mertens. On the other hand, Caroline Garcia’s course on the London turf ends in the round of 16, after her defeat against the Czech Marie Bouzkova.

The clash of promises for Sinner, winner of Alcaraz

This will not take away all the good that we think of Carlos Alcaraz, promised to a huge future. But as at Roland-Garros, the young Spaniard showed that he still had things to learn before being up to the best in Grand Slams. Against Jannik Sinner, one of the other future greats of world tennis at just 20 years old, it was the “older” of the two who took over. More accustomed to these heights, the Italian dominated and ended up beating his opponent in four sets (6-1, 6-4, 6-7, 6-3).

Sometimes disjointed, often breathless, this round of 16 displayed all that is Alcaraz’s strength and weakness at the present time. Already physically ready, mentally strong, he pushed to the end after losing the first two sets, being too expensive. The tie-break of the third, won 10-8 could germinate the idea of ​​a comeback. But Sinner finally managed to prevail on his sixth match point. Carlos Alcaraz has a new lesson to learn.

Heckled, Djokovic pulled out the muscles

The sensation Tim van Rijthoven thought he could make Novak Djokovic doubt. The surprising Dutchman offered a few moments of grace to the public, even returning to a set all against the number one seed. But Djokovic has seen others. And the Serb then rolled out. The triple defending champion qualified for the quarter-finals by dictating his law during the second part of the match (6-2, 4-6, 6-1, 6-2).

As often when he is tickled, the ex-world number one outdid himself, raising his level of play a little more. Van Rijthoven, he was too soft at this level, committing too many avoidable mistakes. Djokovic will now have the right to a greater challenge in the quarter-finals against Jannik Sinner.

Novak Djokovic flying to the QFs. The last two sets were amazing. pic.twitter.com/4o1wqKxVhc

Garcia will not find Jabeur in the quarters

Caroline Garcia should have been wary of a Czech in white. The French had just eliminated two seeds, the local favorite Emma Raducanu, then the Chinese Zhang Shuai. Her round of 16 against 23-year-old Marie Bouzkova looked like a great opportunity. But the Francilienne gave in after 1h23 of play and two rather hasty sets (7-5, 6-2). On the surface, this result could pass for a poor performance. But physically damaged, the 55th WTA player could not give the fullness of her game, showing inconstancy.

Watching this on repeat! @MarieBouzkova producing magic en-route to her first ever Grand Slam quarter-final#Wimbledon pic.twitter.com/ceuRhlxCgj

Above all, Garcia fell on stronger than her. Still unknown, Marie Bouzkova delivered a performance of impeccable accuracy (only four unforced errors) until the end of the match, pocketing the last four games of the match. Beyond the frustration, Garcia will be able to congratulate himself on his level of play displayed in the first week, a very good sign for the rest of the season.

Marie Bouzkova will have a lot to do in the quarter-finals against Ons Jabeur. The Tunisian got out of a possible trap against Belgian Elise Mertens after a very high level match, the best since the start of the women’s tournament. Jostled by a Mertens returned to its peak, Jabeur had to work and dismiss five set points in the first round. The versatility of his game and his success at the net on Sunday did the rest.

Tatjana Maria against Jule Niemeier. You had to be damn daring to bet on such a poster in the quarter-finals. The two Germans however did not steal their place at this level of the competition. Maria had to fight to dismiss a third consecutive seed in the person of Jelena Ostapenko (5-7, 7-5, 7-5). The 34-year-old player is one of the great stories of Wimbledon 2022, she who had never taken part in a second week in a Grand Slam before. Passed close to death in 2008 (thrombosis and pulmonary embolism), returned twice to competition after becoming a mother, Maria had to dismiss two match points to dominate Ostapenko on Sunday and continue her crazy journey.

After returning from maternity leave less than a year ago, Tatjana Maria reaches her first Grand Slam QF#Wimbledon pic.twitter.com/dCv8QXelTY

She will face her compatriot Niemeier, 12 years her junior. Falling from the number two seed, Anett Kontaveit at the start of the tournament, the native of Dortmund this time dominated the Briton Heather Watson (6-4, 6-2). In full progress, already in the third round at the Australian Open at the start of the season, Niemeier should quickly climb the hierarchy, she who is still only 97th player in the world.

Today’s thriller is by David Goffin and Frances Tiafoe. The Belgian had to tear himself away before dismissing the American after 4:36 at high intensity (7-6 [7-3], 5-7, 5-7, 6-4, 7-5). Led two sets to one, the 31-year-old remained calm and made his tactical science speak. Goffin proves that he has regained an excellent level, he who was a regular in the Top 15 for several seasons, before seeing his body betray him on several occasions.

He can legitimately eye the last four of a Grand Slam for the first time in his career… just like his opponent in the quarter-finals, the Briton Cameron Norrie. The latter, seeded number 9, won in three sets against the American Tommy Paul (6-4, 7-5, 6-4).